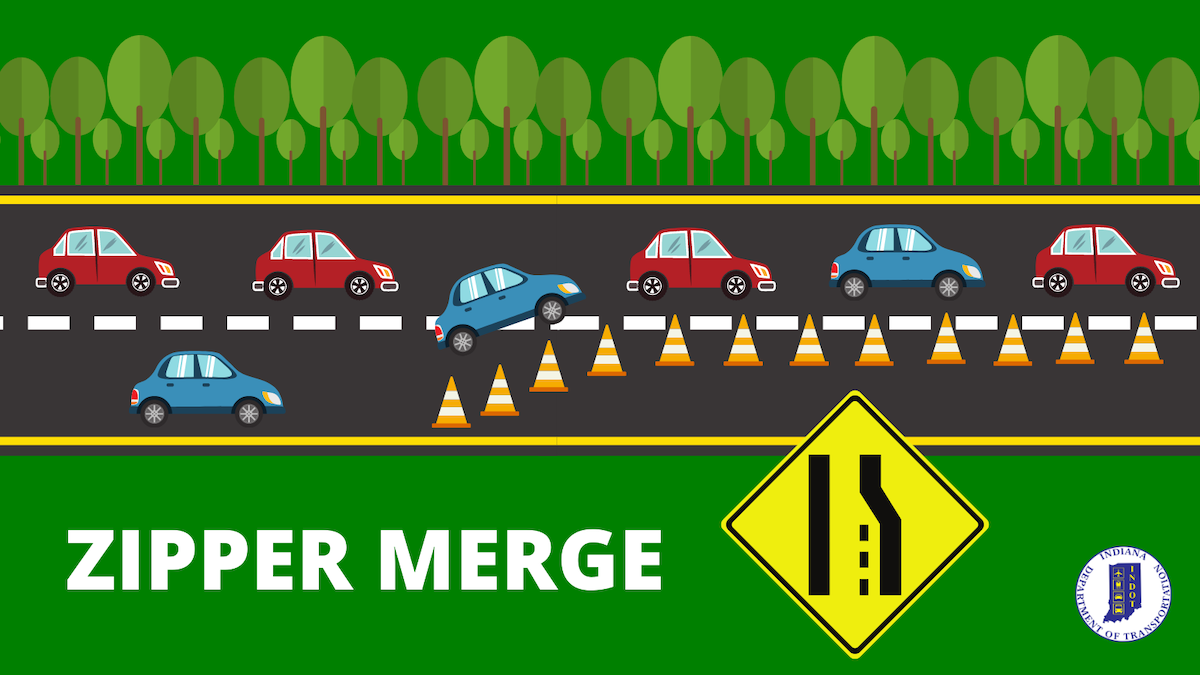 For many drivers, zipper merging runs counter to instinct because it involves letting the driver who stayed in the closing lane scoot in at the last minute. But DOTs are finding that this merging process, particularly when done in slower heavy traffic, can reduce traffic lines by 40% over early merging, when lanes have to be closed for road and bridge work.

The zipper merge also brings some order and fairness to what can feel like a never-ending wait as drivers switch in and out of lanes, always thinking the other one is moving faster, DOTs say. Early merging in heavy traffic can also lead to crashes and road rage, says the Indiana Department of Transportation.

INDOT recently announced it will transition to more widespread use of zipper merging this construction season. The agency is advising drivers to stay in their lanes until signs tell them to merge. At that point, drivers merge into the open lane, while drivers in the open lane take turns letting merging drivers in.

The Arizona Department of Transportation, which has been using zipper merging since 2016, has recently set up a “smart work zone” at a bridge deck rehabilitation project on Interstate 40 between Flagstaff and Winslow. The department is studying the effects of the smart work zone, in which traffic flow is controlled remotely by computer network, smart sensors and digital message boards. The system detects traffic in real time to try to reduce accidents and improve safety.

The DOT calls it a dynamic merge system, and it will be conducted alongside traditional early merging to compare the results.

“Crash data and speed data will be gathered from the smart work zone and traditional work zone and used to evaluate the impact and inform decisions on future highway projects,” ADOT says.

The Washington State Department of Transportation has also been using zipper merges. And a bill in the state legislature calls for adding zipper merging to the state’s driver education program. Those seeking a license would have to answer questions about it on the license test and those renewing their licenses would have to watch videos about zipper merging. The bill appears to have died but could return later in the session, according to King 5 TV news station.

Illinois enacted a law last year that required information about zipper merging be added to the state’s rule book for teaching driver’s education.

Public reaction to zipper merging in Indiana has been mixed.

“How this will really work is the road hogs in the left lane will refuse to let the right lane people merge and it will back up traffic for miles,” one person posted to INDOT’s Facebook page.

{Related: States look to ‘zipper merge’ to ease traffic around work zones, but will drivers get it?}