Two members of a utility construction crew died in a trench collapse Monday, May 9, in Punta Gorda, Florida.

The pair had reportedly jumped into the trench to take a quick measurement when the trench collapsed upon them, trapping them both. The utility project was reportedly part of a $14 million, five-mile utility extension that is part of an upcoming development in the area.

The two men were identified by the Charlotte County Sheriff’s Office as Marco Santiz-Lopez, 41, and Brandon M. Colburn, 25, employees of Guymann Construction of Cape Coral, Florida. Due to the pending investigation, the company declined to comment about the incident.

The Sheriff’s Office Major Crimes conducted a preliminary investigation and found no signs of foul play or criminal intent, ruling the incident on Burnt Store Road an accident.

“It wasn’t a normal cut into the earth,” Dunn said. There were two utility lines, an existing concrete storm sewer and a water transmission line. In addition, he said, the side of the trench was adjacent to the roadway. “The side closest to the edge of the asphalt is what caved in on them,” he said. 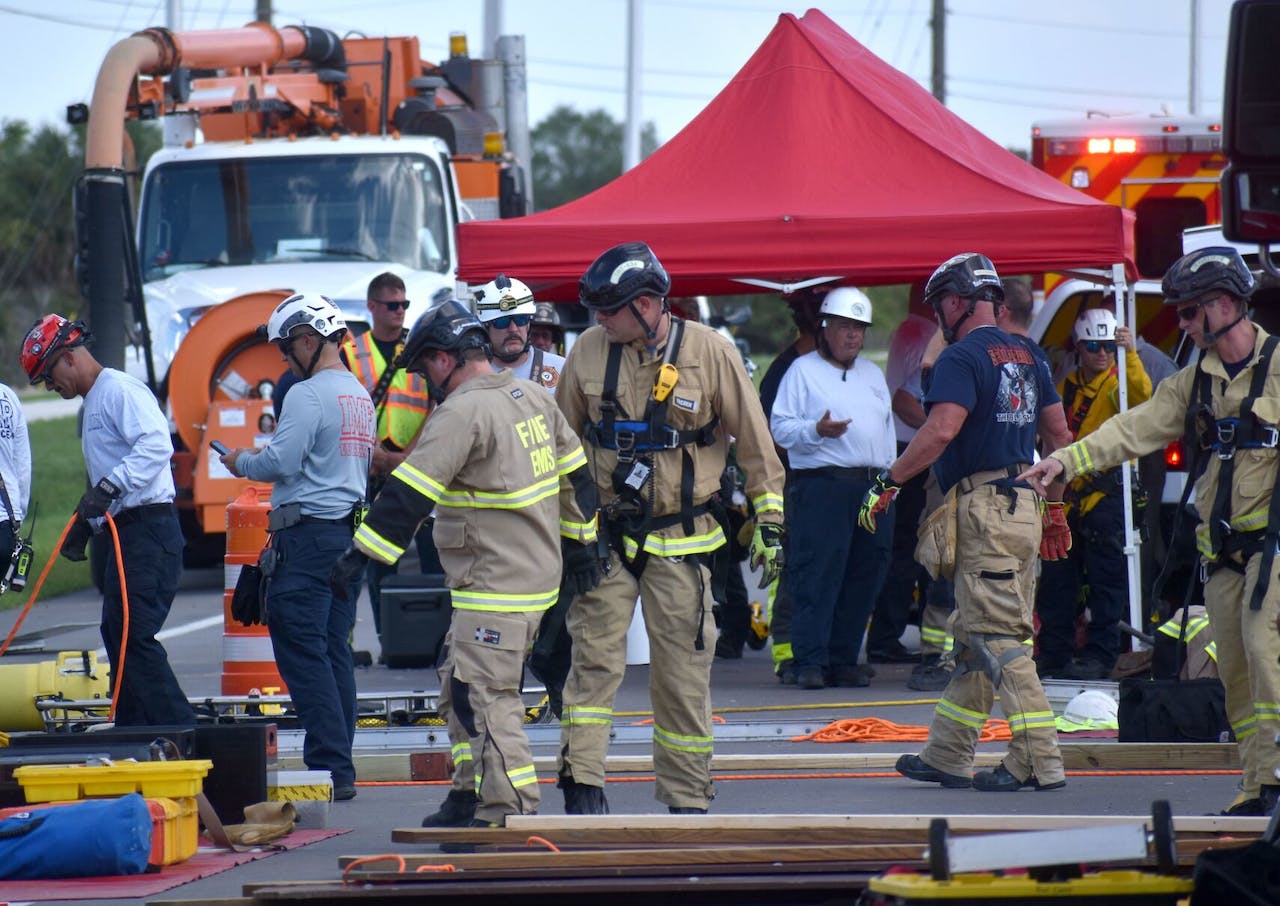 Firefighters prepare wood beams to prop up a hole Monday, May 9, after a trench collapse near Punta Gorda. Two workers were killed in the collapse.Daily Sun photo by Frank DifioreAccording to Dunn’s estimates, the trench would have been about 10 feet deep prior to the collapse. While the first victim was found near the surface, the second was found far into the depths of the trench after several hours.

The Daily Sun, the local newspaper, said the 911 call was released to the media on Tuesday. “Hey, help me get him out! He’s moving!” shouted the caller to the 911 dispatcher as sounds of digging were heard.

Dunn says deputies were the first to arrive on the scene and apparently got into the trench to assist another Guymann Construction crew member who was trying to keep his co-worker alive with CPR. The man’s head was reportedly still visible above the dirt. Attempts to revive him were unsuccessful, and he was pronounced dead.

When the Charlotte County Fire and EMS members arrived, they immediately got everybody out of the trench, Dunn said. Although at the time the first victim was not out all the way, and the co-worker and deputy had attempted CPR, for their safety and to ensure no one else was hurt, they had to shore up the trench before initiating any further rescue efforts, he said.

According to Dunn, there was no support box in the trench when firefighters arrived. An OSHA inspector was on the scene Monday evening as part of the investigation.

Meanwhile, Dunn said firefighters and EMS personnel quickly worked to deploy wooden beams to shore up the trench and allow them to reach the two victims.

Dunn said Charlotte County firefighters were assisted by Lee and Collier counties, as well as Florida Urban Search & Rescue Task Force 6 members. Task Force 6 is a team of specially trained members from different agencies that are called in for specific rescue operations like this.

All together he said there were 30 Charlotte County firefighters and 26 other emergency personnel on scene.

“A lot of work goes into that process,” he said. “We have to unload the wood, cut parts to length and put them down in the trench to keep it from collapsing.”

The first victim was retrieved quickly near the top of the trench. However, it took nearly 4 hours, until around 7:30 p.m. on Monday, May 9, to recover the second victim. 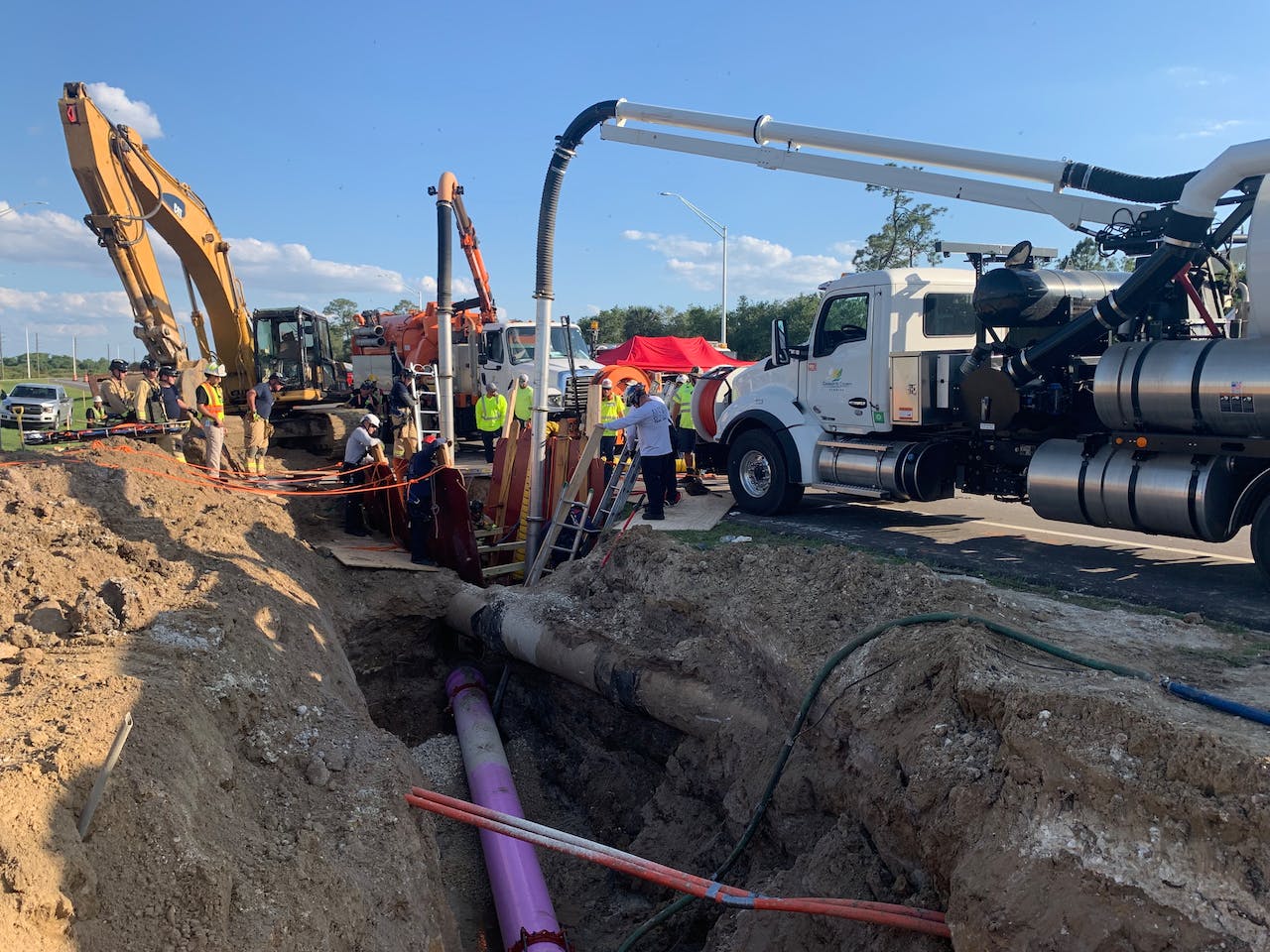 The trench, part of a water and sewer utility extension, was originally approximately 10 feet deep. The two men had reportedly gone in for a quick measurement.Charlotte County Fire & EMS