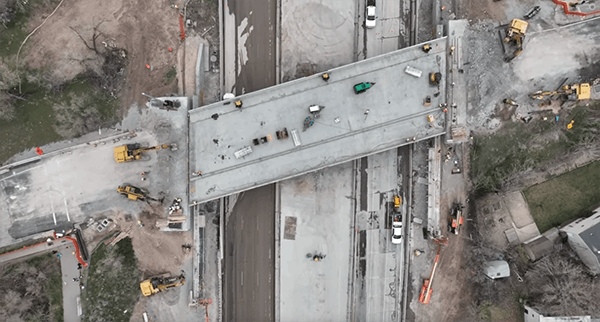 The Utah Department of Transportation slid a new bridge into place over busy Interstate 80 in 3.5 hours.

The department only had to close the I-80 section at 1700 East in Salt Lake City from 9 p.m. April 8 until 7 p.m. April 9 for the old bridge’s demolition and the opening of the new bridge. The closing was about 18  hours faster than expected.

The demolition occurred the night before. (A time-lapse video of the demolition and slide can be watched at the end of this article.)

The project not only opened the state’s road construction season but showed the department’s continued commitment to accelerated bridge construction. UDOT has been one of the pioneering states in ABC, conducting its first project in 2003 in seven days. It, too, was a bridge over I-80, at Hoytsville Road in Summit County.

UDOT started with ABC to speed up bridge construction to significantly reduce traffic delays and increase safety for workers and motorists. Now adopted throughout the U.S., the process typically involves constructing a bridge off-site and then moving it into place after the bridge it replaces is demolished.

What once took months or years of traffic disruptions can now be accomplished in days, or even hours.

In this most recent ABC project, the new bridge was built beside the old one, which first opened in the 1960s.

“The new bridge will provide a smoother ride for drivers and will enhance safety for cyclists and pedestrians, with a new 14-foot-wide path on the west side along with a new sidewalk and bike lane on the east side,” UDOT says.

The agency also announces that it has 175 projects under construction this year with a total value of $2.5 billion.

“The projects are focused on meeting current and future transportation needs here in Utah – one of the fastest-growing states in the country – while keeping existing roads, bridges, sidewalks and trails in good condition,” the agency says.

Check out this video by the Utah Department of Transportation of the 1700 East bridge demolition and slide: