A new AI platform designed to provide a digital assistant to the construction industry has been launched by Slate Technologies.

“Slate is the catalyst for a significant shift in how we deliver buildings, where software works hand-in-hand with humans to transform productivity and profitability,” said Jeff Bettencourt, CEO of Slate. “In construction, a building project is only on schedule on the day its master schedule is created. Slate offers the first-time ability for construction companies to see what is happening with all aspects of a project – including materials, workers, and weather – to perceive problems so they can make changes along the way, minimizing waste and costs while maximizing productivity and revenue.” 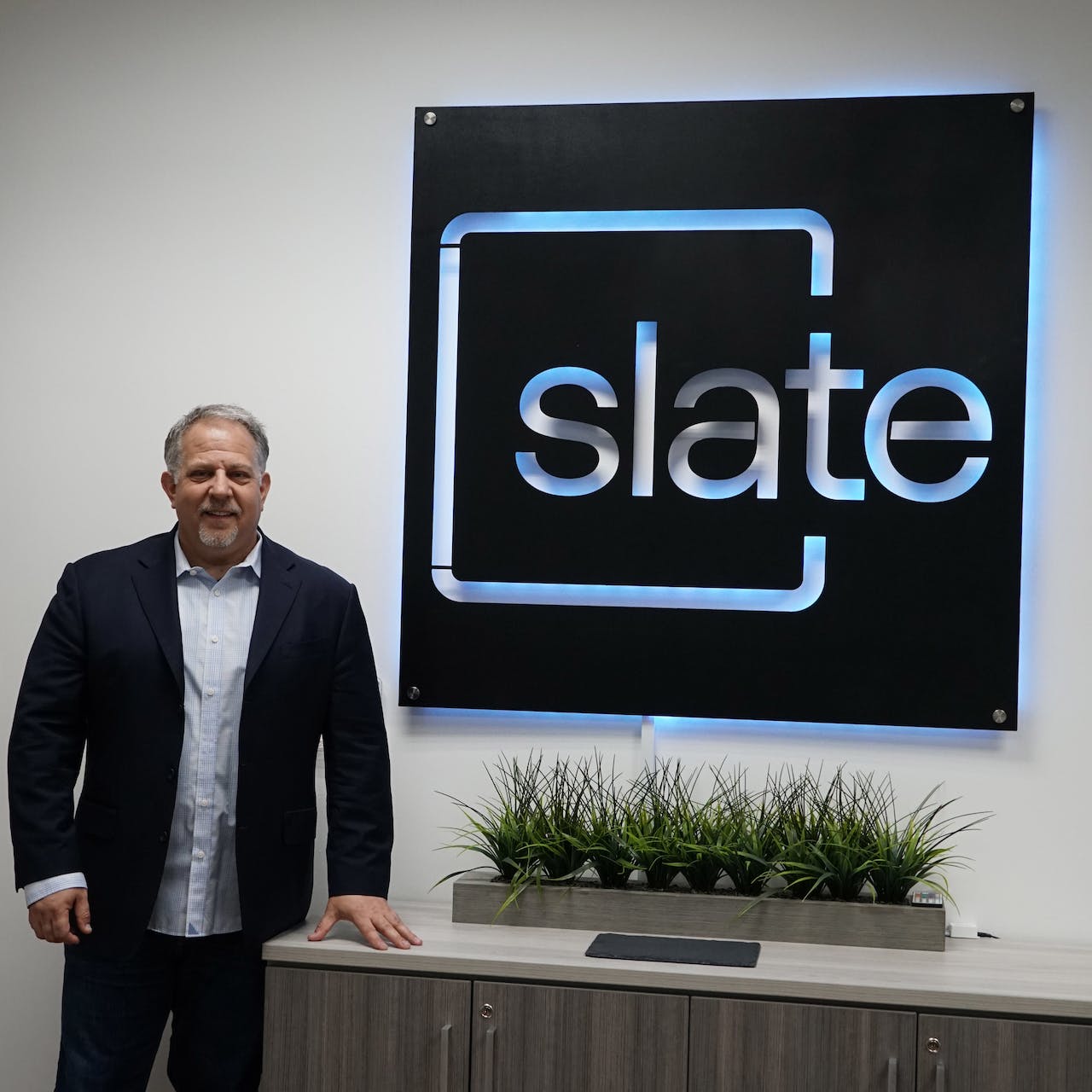 “What’s new to us is the ability for our platform and the software that we’re taking in and building to be able to take all this information in in the construction process and actually provide meaningful decisions that allow people to get more productivity out of it,” Bettencourt says. “When we talk to a lot of construction companies, they’ll say, it’s not necessarily the workflow, because that’s been pretty well defined and is pretty well covered today, but it’s all the things that they can’t see.”

Numerous software companies are active within the industry to assist in the overall workflow of the construction process. When having conversations with potential customers, Bettencourt says most say they have a variety of problems they can solve with numerous solutions and question what’s different about Slate.

“The idea is once the data comes into our system, it becomes a living entity, because we have the notion of a SaaS model that’s built on multitenancy so that the data is anonymized, but the data also has learnings to it that actually can impact.”

For example, if multiple RFIs come in and changes something on the schedule and the system sees things changing for the better, it will start to try to correlate all those different activities to try to figure out what’s the most optimal way, and what’s happening, so that the contractor might have a better way of doing things in the future.

Once customers use the system for multiple projects and establish patterns of how things are done, Slate’s program will create recipes for how certain projects are completed.

For example, if it’s a concrete pour and you’re changing the amount of concrete and a few other things, the lessons learned from the previous job will be part of the recipe set.

“The idea is that once you’re building a schedule, you might find that because this thing’s alive, I might want to build my schedule on this the next time I do it, because it has all the data and I’ve got recipes set up on certain tasks,” Bettencourt says.

Slate’s system will run digital rehearsals based on how the schedule is set-up, providing information on what would happen given certain constraints to provide information to site supervisors to make better process decisions. Bettencourt says Slate is all about getting more productivity out of the site supervisor, professional scheduler and the people on the ground who are doing daily reports.

“In order for us to be a true digital assistant, we have to make sure that our software can adapt to any user,” he says. “If we’re doing our job well enough it shouldn’t take very long to learn how to use it. The construction industry hasn’t really used a lot of technology, like other industries. We’re trying to say, if we want them to use ours, it must be as simple as possible”

As far as bringing data in, depending on the client, Slate will work with them to integrate it into their system.

“In order for Slate to understand the concept of a schedule, and what can be modified to change that schedule, and for it to become alive, it has to enter our system,” Bettencourt says. “Regardless of where it was created, you might be using all kinds of different applications, we can take in that data from those applications, we have connectors that can ingest it and then what we can do is work to normalize it and then put it into our system.”

Schedules can be loaded in from other applications through a robust connector module that allows Slate’s API to connect to multiple types of applications. Once input, Slate’s software immediately looks at the different work types and schedule pieces, pulling any information that might impact that and starts to find relatability connections between all that data.

“The idea is that it’s not about how the information gets in, it’s the information that gets in that allows the decisioning engine to start working and provide better outcomes to the actual different users of the system as they work on their day-to-day tasks,” he says. “How does all that information get to a point where it’s in the hands of people that can notify them when things are happening on changes that they can make, that might create a better outcome?”

Slate is intended to allow each person who has a job in the construction process (managers, architects, engineers, site supervisors, foreman etc.) to have the software tailored to them.

“If I’m the site supervisor, the view that I’ll have will be totally different from the view of somebody say that’s in management that’s looking at it from a high-level perspective,” Bettencourt says. “It’s more than just a pull plan to kind of see what’s going on but more to ask questions of the system and have it give you data back that says this is what will happen, these are the things that will collide.”

Available for Android or Apple devices, the digital assistant can travel anywhere the worker goes on the job site.

“The problem is that it’s been proven that we as humans are not very good at looking at multiple things at once and discerning patterns,” Bettencourt says. “That’s where the computer software gets really smart because it can find patterns and note those patterns into memory, so when it sees those patterns again, there is usually a positive or negative change to react to.”

Using machine learning and artificial intelligence to act like a human and giving context to data, Slate is trying to solve that problem.

“We often hear from a lot of construction professionals that are down doing the work that they don’t even know really what the contract says or what the penalties are if the schedule slips, because they’re doing their job, and in their silo,” he says.

Using Slate to combine all the data on a contract, schedule and more, if asked, it will tell a user they are already behind and where and whether a penalty is forthcoming.

“It’ll bring in all that data, so that the person that’s actually making those decisions can actually see what the implications are of the decision,” Bettencourt says.

However, he emphasizes that Slate is not intent on taking the human element out of the loop of the construction process.

“Construction has always been about humans and machines,” Bettencourt says. “Whether the machine was a rock, a piece of wood or the machines that we have today that move things around at construction sites. Now these are just the new machines, the ability to have every person has now started to get to a point where they have a phone or a computer in their hand, so what’s the lowest common denominator?”

The evolution of Slate may include GPS locators on photos to direct workers to areas of a building that need work redone and could even include a listing of tools needed to the complete the work.Slate Technologies

Although Slate just launched its first version, the company is already discussing the next steps in development such as offering customers an opportunity to determine what information they want and how they want it presented.

“We like to say the year of the dashboard is over,” Bettencourt says with a smile. “Nobody really wants to go and stare at a bunch of dashboards. We have a dashboard, if you want to go see it, but that dashboard can become alive because we can say push this information to you two or three times a day, or when there’s something significant that happens.”

The information can go to a phone, a tablet or whatever device customers are actively engaged on.

“We’re working very hard with some gamification techniques, to make sure that that we can adapt the user interface so it will look the same on a desktop, tablet or phone,” Bettencourt says. If a foreman stopped doing work on a phone and got to a desktop, it would be like continuing a show on Netflix as if you never left.”

Developers are building an ability to track carbon output and different things like that to help companies make decisions at the level on how they can become a greener company. In the end, the idea is to have Slate function almost like Siri, where you ask Slate something and it responds. Not all those functions are available yet, but most are on Slate’s roadmap of development.

“We have very deep robust product already,” Bettencourt says. “We’ve got clients that are already starting to work with us on it and put data into the system and it will only grow as we go from there. I come from more of the technology side so it’s really kind of cool to come in and see the different things we’ll be able to offer it to the construction industry that maybe hasn’t been offered before.”