The National Transportation Safety Board has released a preliminary assessment of the January 28 collapse of a bridge in Pittsburgh, with five passenger vehicles and a transit bus on it, that injured 10 people.

The NTSB report released February 7 says the collapse occurred due to a structural failure on the west end, but it has not yet determined the cause of that failure. The 2013 New Flyer articulated bus was traveling east when the 447-foot-long Fern Hollow Bridge collapsed and fell about 100 feet down into Frick Park.

The bus and four passenger vehicles were on the bridge, and a fifth vehicle drove off the east bridge abutment after the collapse and landed on its roof on the ground below, the report says. 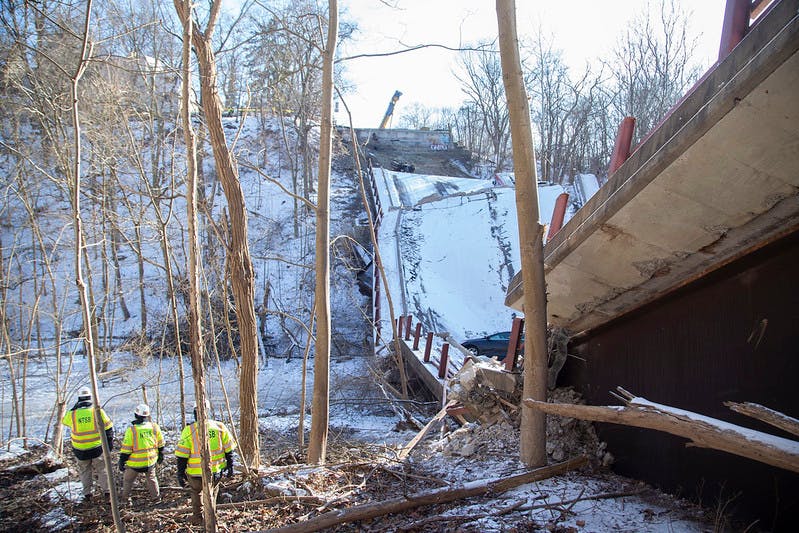 NTSB inspectors conduct preliminary assessment of Fern Hollow Bridge collapse.National Transportation Safety BoardThe collapse occurred at 6:40 a.m. and injured 10 people in the vehicles and bus, but caused no fatalities. It was snowing at the time and some snow had accumulated on the 50-year-old bridge. Schools had been delayed due to the weather, so there was not the typical traffic on the bridge, which handles about 14,000 vehicles a day.

The bridge carries Forbes Avenue over the park. It is a four-lane, non-divided road with sidewalks on both eastbound and westbound sides. The speed limit is 35 mph, and its weight limit is 26 tons. The bridge had been rated as being in poor condition since 2011, according to the Pittsburgh Post-Gazette.

“Although certain areas of the welded steel girders were identified as being fracture critical, no primary fractures were found in these areas,” the report said. A fracture critical member is defined as a “steel member in tension, or with a tension element, whose failure would probably cause a portion of or the entire bridge to collapse.” 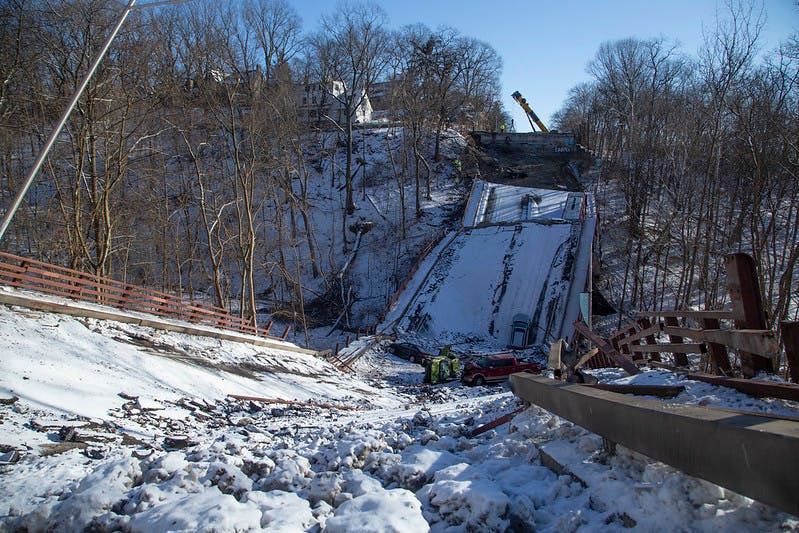 The bridge ends were atop reinforced-concrete caps on stone masonry abutments. And the girders were also supported by two inclided, welded-steel frame legs that were made of uncoated weathering steel. The legs were on reinforced-concrete thrust blocks.

NTSB says its investigation will continue as bridge debris is removed. The bus also had seven cameras, footage of which will be studied by a group of specialists.

“The NTSB is evaluating the design of the bridge, its condition at the time of the collapse, its maintenance and rehabilitation history, and its inspection and load rating history,” the agency says. “As the investigation progresses, the NTSB plans to conduct forensic examination of several of the bridge’s structural components.”

The investigation is expected to take anywhere from a year to 18 months. 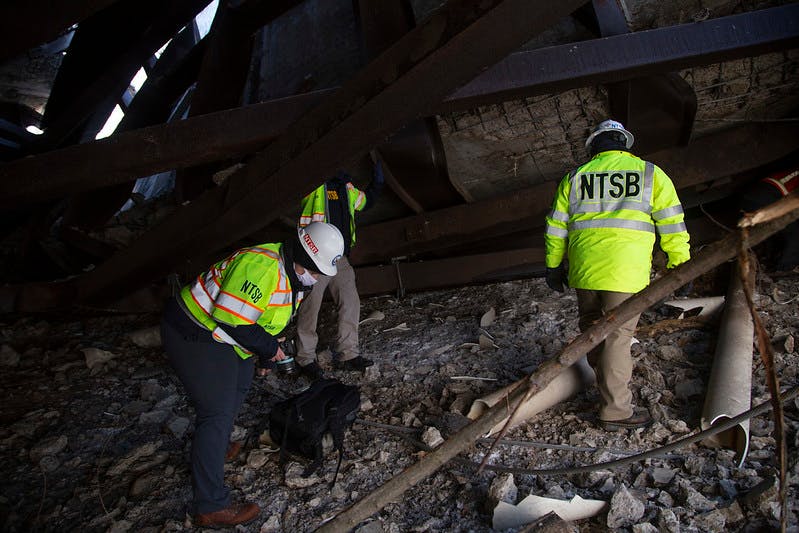 National Transportation Safety BoardMeanwhile, the Pennsylvania Department of Transportation is planning a $25.3 million replacement bridge, which will be covered by federal funds under the new $1.2 trillion infrastructure law. Swank Construction, based in Pennsylvania, and HDR have been hired to design the new bridge.

A couple, ages 69, who were injured in the collapse are suiing PennDOT; the city of Pittsburgh, which owns the bridge; and the Port Authority of Allegheny County, which owns the transit bus. The couple were in a pickup truck that fell 100 feet to the ground. Their attorney says they have fractured spines and are in body braces.

The NTSB released the following video of its inspections of the collapse site: