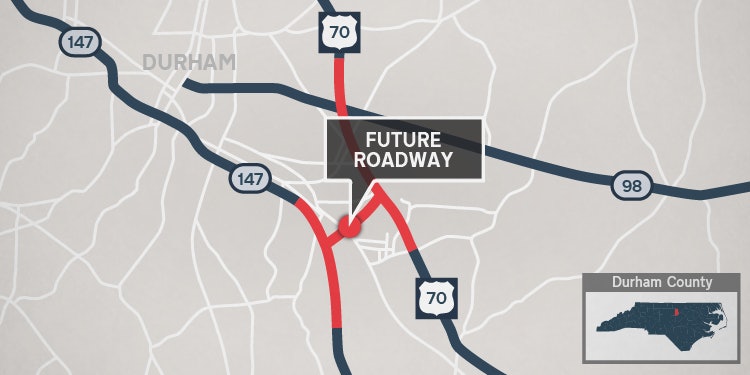 A stoplight-free drive between I-40 and I-85 is coming soon for drivers in Durham, North Carolina, with the completion of a new Interstate 885.

Final paving and road striping are underway for the future East End Connector that will link N.C. 147, also known as the Durham Freeway, with U.S. 70.

The new I-885 will run concurrently with U.S. 70 between I-85 and the connector, along the connector, and on existing N.C. 147 between the connector and I-40, according to the North Carolina Department of Transportation.

The goals of the project are to reduce traffic congestion on N.C. 147 through downtown Durham and divert traffic off local roads used as connectors between I-85 and I-40. It is also hoped it will improve economic development in areas along the I-85 corridor by improving access for travel and goods between Durham and areas north, such as Research Triangle Park, Raleigh Durham-International Airport and Wake County, according to NCDOT.

A specific date for I-885’s opening has not be set, but it is expected by summer.

The contractor on the $142 million project is Dragados USA. The contract was awarded in 2015. The freeway was originally planned to be completed in 2019, but demolition of a railroad bridge over U.S. 70 was delayed from 2018 to this year.