Liebherr recently unveiled a variety of updates and an expansion of its mobile crane lineup during Customer Day at the Liebherr USA Co. headquarters in Newport News, Virginia.

The company is rising to new heights with the LTM 1300-6-3, which features a 295-foot telescopic boom with variable axle load.

Liebherr also is launching a new standard crane design for its all-terrain series, starting with the rebranding of the popular LTM 1110-5.1. With multiple new features including the LICCON crane control system, the ZF TraXon DynamicPerform gearbox, an updated operator’s cab and an oil-cooled multi-disk clutch, the unit is now the LTM 1110-5.2. 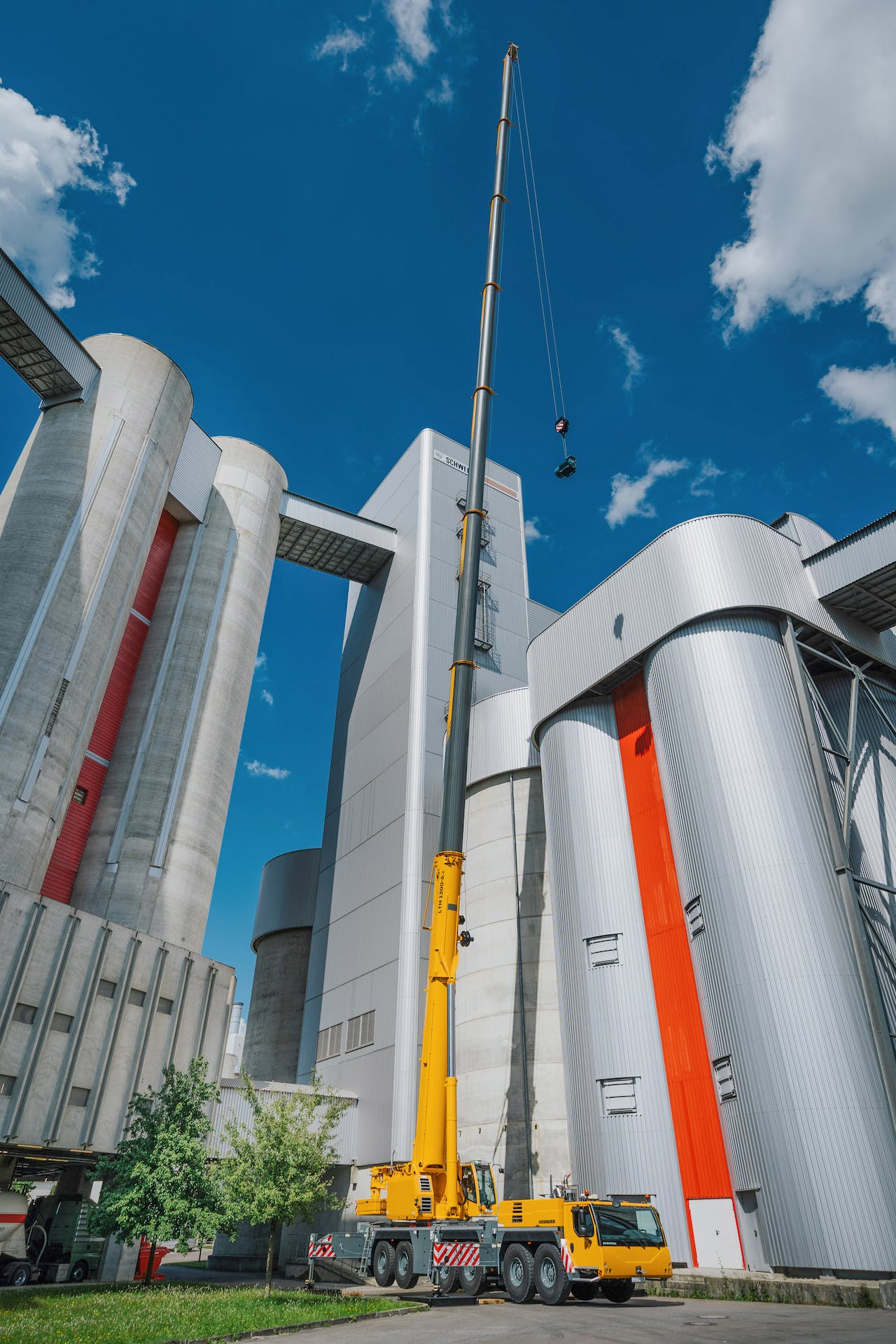 With the unveiling of the LTM 1300-6.3, Liebherr says it has set a new world record with the mobile crane being able to carry the 295-foot boom with an axle load of just 13 tons.

A new feature on the LM 1300-6.3 is an optional central lubrication system for the king pin bearing on the chassis. The system delivers grease to 24 lube points on the six-axle crane automatically.

Also, there is an optional six LED rear light package available to illuminate the working area.

The unit uses Liebherr’s VarioBallast feature, to vary ballast radius in increments of 3 feet from 16 feet to 19.5 feet using standard mechanically adjusted ballasting cylinders. This assists the crane in constricted conditions and allows for 8.8 tons less ballast than the LTM 1300-6.2. An Auto-Ballast function requires only a touch of a button to secure the ballast to the turntable, taking the strain off the operator for the routine procedure.

A single 8-cylinder Liebherr diesel engine powers the crane, featuring an additional ECOdrive mode or ECOmode in crane operation to save fuel and reduce noise. The complete pump drive is disconnected automatically when the engine is idling and then reconnected by the intelligent controller in a matter of seconds when required.

Liebherr says the LTM 1300-6.2 is still available as an entry point model into the class of luffing jib cranes. 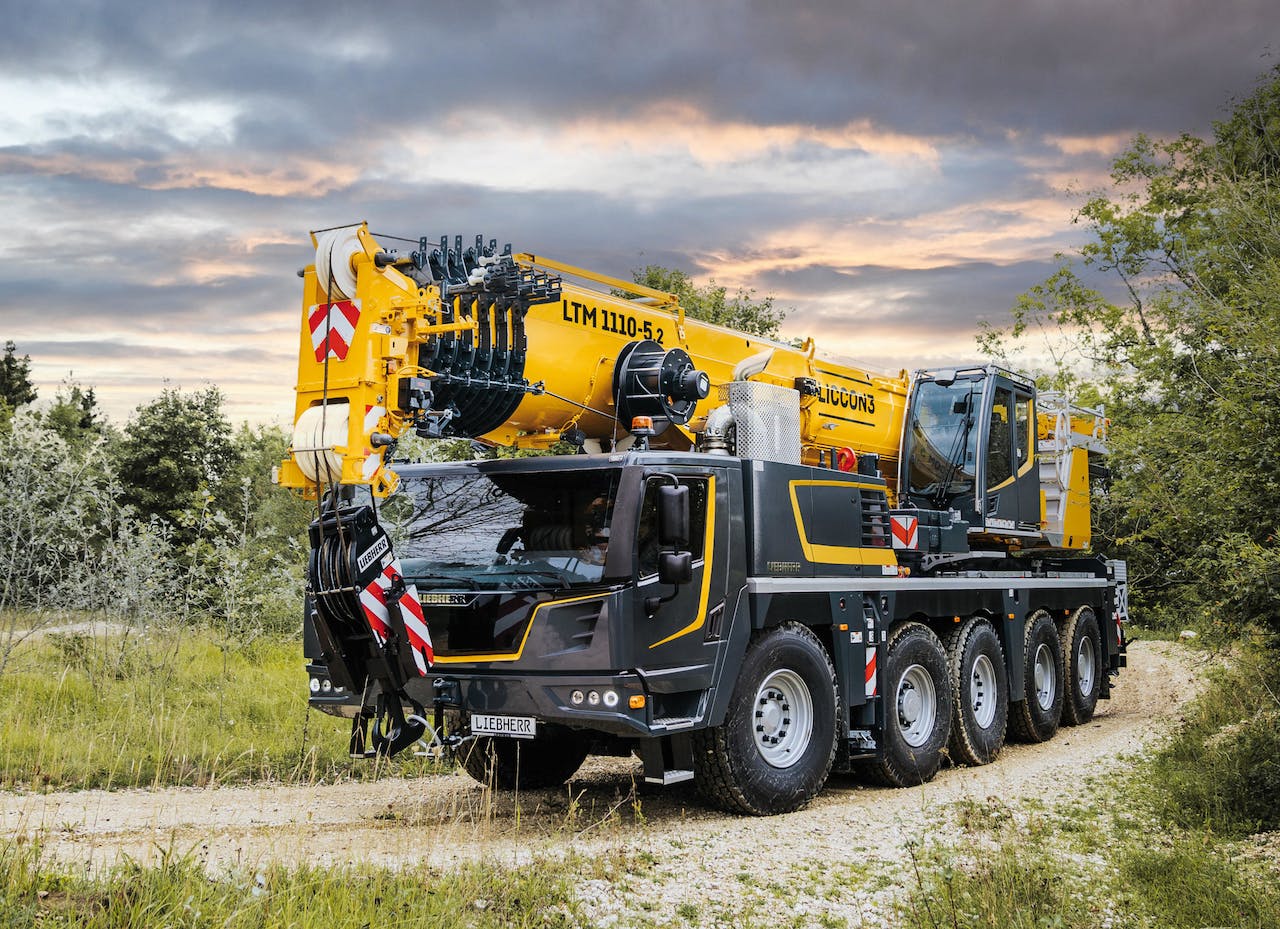 Engineered for the future

The updated LTM-1110-5.2 features an award-winning cab design that debuted at bauma 2019. Designed in collaboration with Jürgen R. Schmid, Design Tech, Ammerbuch, Germany, the cab offers a modern design and premium materials. Improvements made for the operator include the new multifunction steering wheel, side roller blind on the driver’s door, improved instruments and modules, as well as new displays and options such as the central locking system with remote key, the cool box and tire pressure monitoring system. 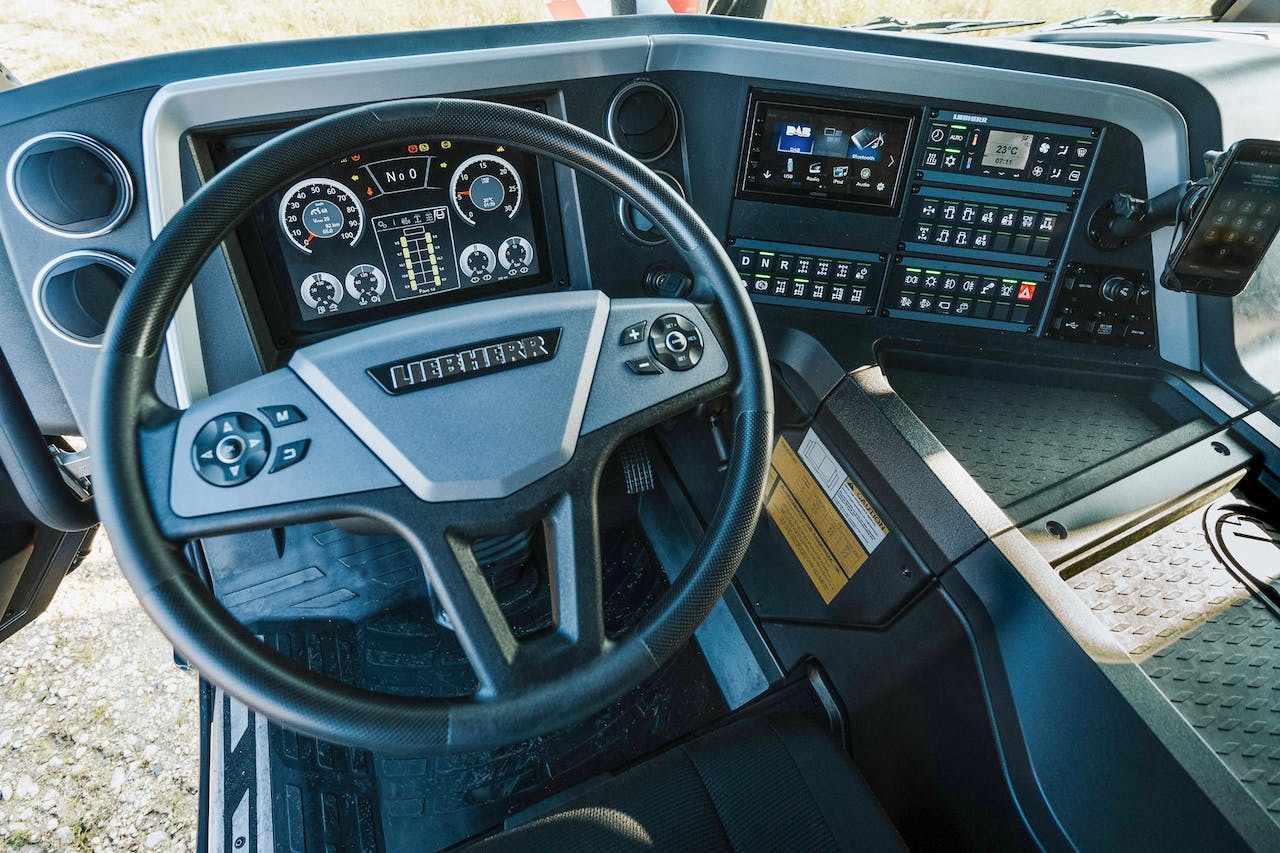 The new cab and functions were designed for crane operators in mind, such as a new multifunction steering wheel, improved instruments and keypads as well as new displays.Liebherr

Additional features of the crane include new automatic heating and climate control system in both the driver’s and operator’s cab, a standard radio with hands-free feature and a revised LED lighting package for crane cabs, the superstructure, the rear of the machine, the front headlights and the telescopic boom and lattice jibs.

“LED technology is a real plus as a result of its long service life. It will last for many more hours of service and provides better lighting,” said Nicholas Münch, head of the Control System Department at Liebherr in Ehingen, Germany.

Maintaining an eye to the future, Liebherr says the LTM-1110-5.2 features the third generation of its LICCON (Liebherr Computed Control) system, which has a new software package that offers more storage space and computing power.

The new system has several similarities to the current control system including tested hardware components and the BTT remote control terminal. The touchscreen function on the new display in the superstructure cab and the revised and simplified way information is displayed makes the machine easier and more comfortable to control. In addition, LICCON3 cranes are also prepared for standard telemetry and fleet management systems. In future models, crane contractors will be able to view and evaluate all the relevant data using the MyLiebherr customer portal. 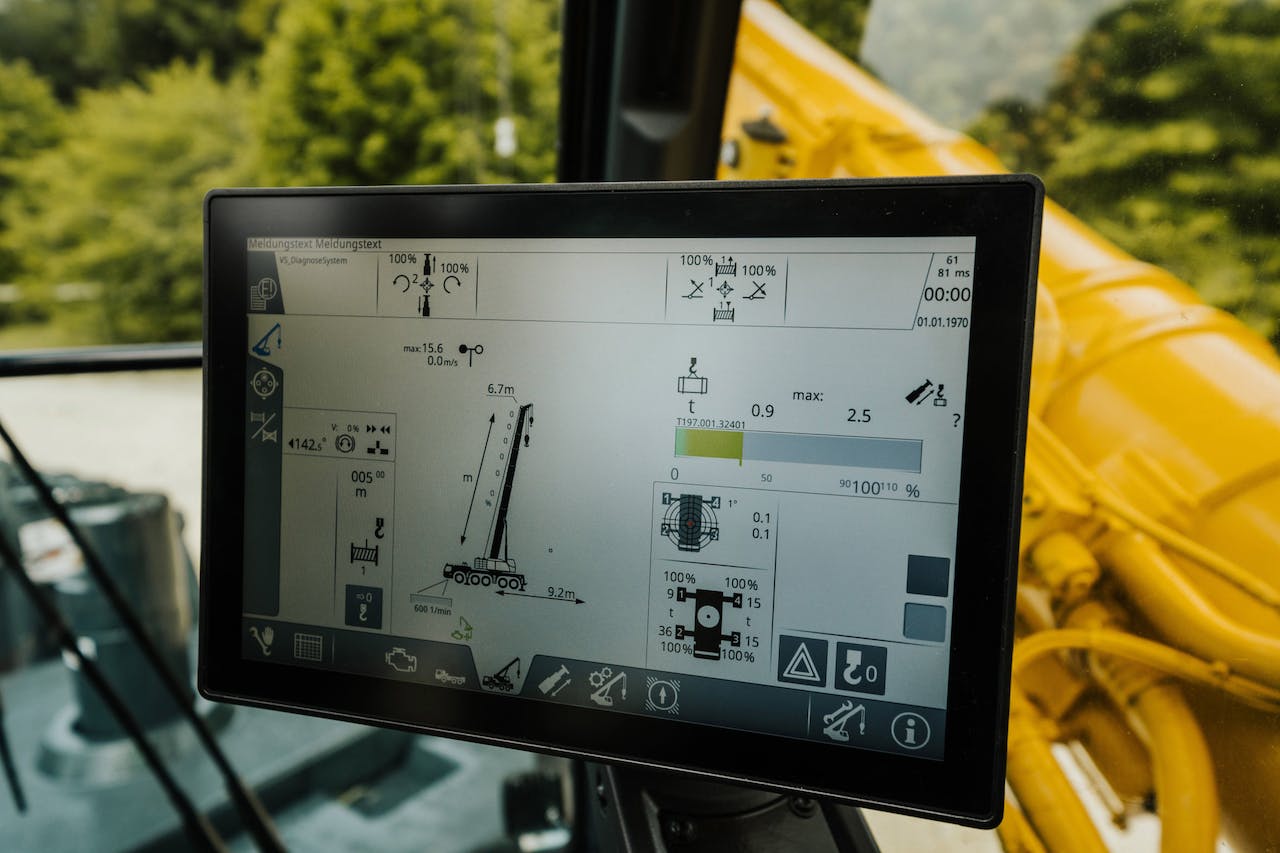 The large display in the superstructure cab makes operation even easier and more comfortable.Liebherr

“During the development of the new control system, it was important to us that crane operators, who are familiar with Liebherr cranes, would be able to get used to the new control system quickly and easily,” said Münch. “At the same time, we must be future proof as the progress currently being made in microelectronics is immense. Complex applications, such as VarioBase, which require a great deal of performance data, can now be developed more frequently in the future. The current LICCON2 control system is reaching the limits of its capacity.”

According to Liebherr, the ZF TraXon gearbox on the LTM 1110-5.2 helps reduce downtime and extends the service life of the drivetrain. The TraXon DynamicPerform was developed through a partnership between ZF and Liebherr, to ensure its integration in the drivetrain of the mobile cranes. 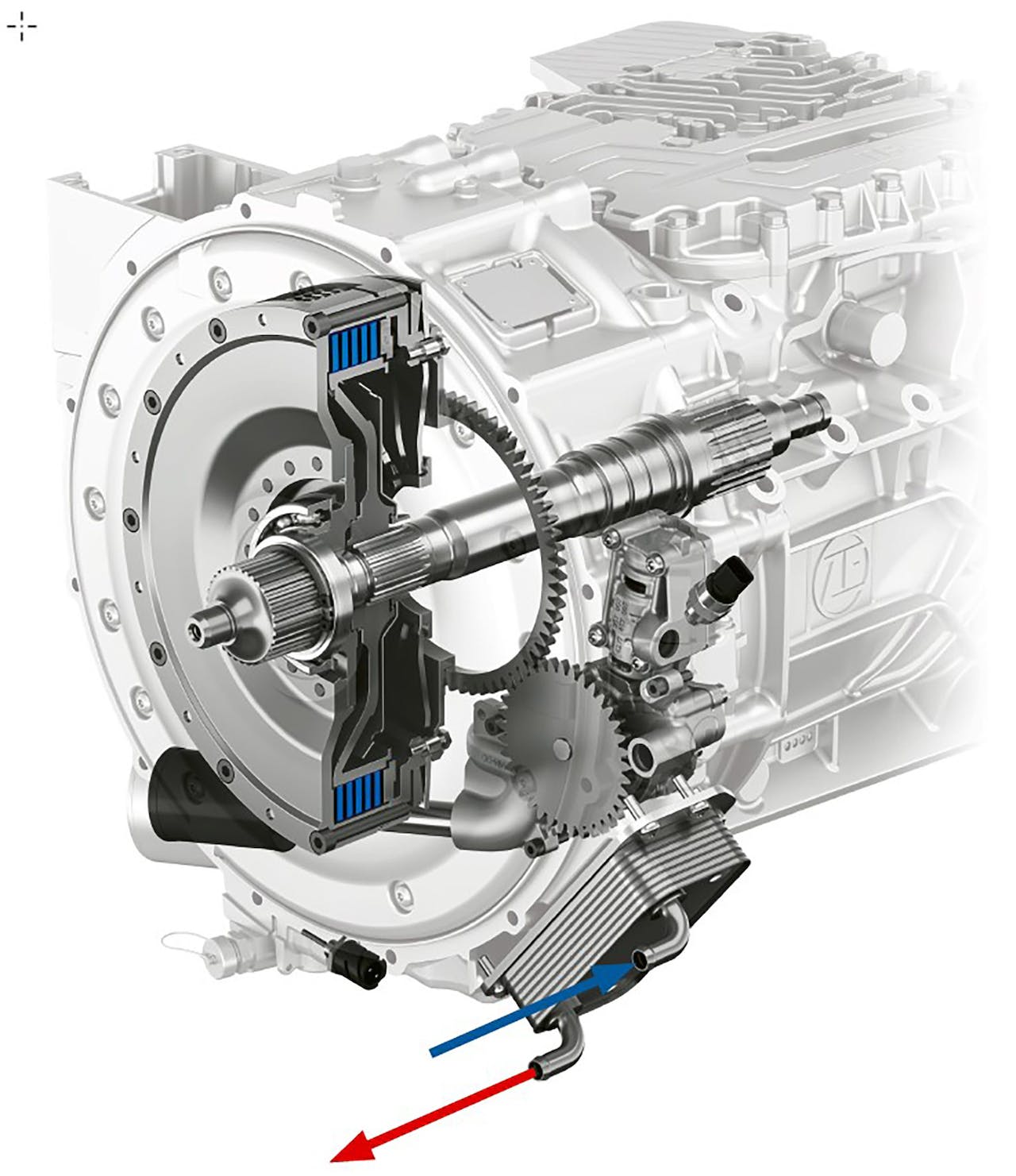 The new DynamicPerform clutch module transfers the engine power using integral discs which are cooled by the oil system.Liebherr

Josef Schick, head of the Testing Department at Liebherr, says the cooling performance of the DynamicPerform clutch module has been significantly increased due to improvements to various hardware components. The model has been refined for calculating disc temperature.

According to Schick, the clutch module transmits the engine power via an oil-cooled plate pack that runs in oil. The friction heat generated when starting is dissipated in the clutch oil and supplied to the cooling system via an oil/water heat exchanger.

The higher energy and power consumption, together with a calculation model, makes permanent and almost wear-free maneuvering possible. With extreme loads, a clutch protection function prevents overheating of the clutch and the associated increased wear or destruction of the clutch.

The company plans to install DynamicPerform in its five-axle mobile cranes on a step-by-step basis. On mobile cranes with six or more axles, the ZF 12-speed TraXon Torque gearbox with starting converter will continue to offer zero-wear maneuvering and increased torque.