The long-awaited $1 trillion infrastructure bill passed the U.S. House on Friday night and heads to President Joe Biden’s desk for his signature.

The Surface Transportation Reauthorization Act included in the bill would spend a record $304 billion over five years for highway, road and bridge programs, a 34% increase over current levels, according to the Associated General Contractors.

“Because of today’s vote, state and local officials will be able to invest in a more efficient supply chain network. They will also be able to improve roads and bridges to make them safer and more reliable,” says AGC CEO Stephen Sandherr. “Metro areas will be able to better maintain and expand transit systems. And water authorities will be able to further safeguard the quality of local drinking water, among other improvements funded by this bill. The measure also provides needed investments to make infrastructure more resilient to extreme weather events.”

The American Road & Transportation Builders Association says the bill will amount to a 36% annual increase in real highway funding, the highest since the late 1950s. 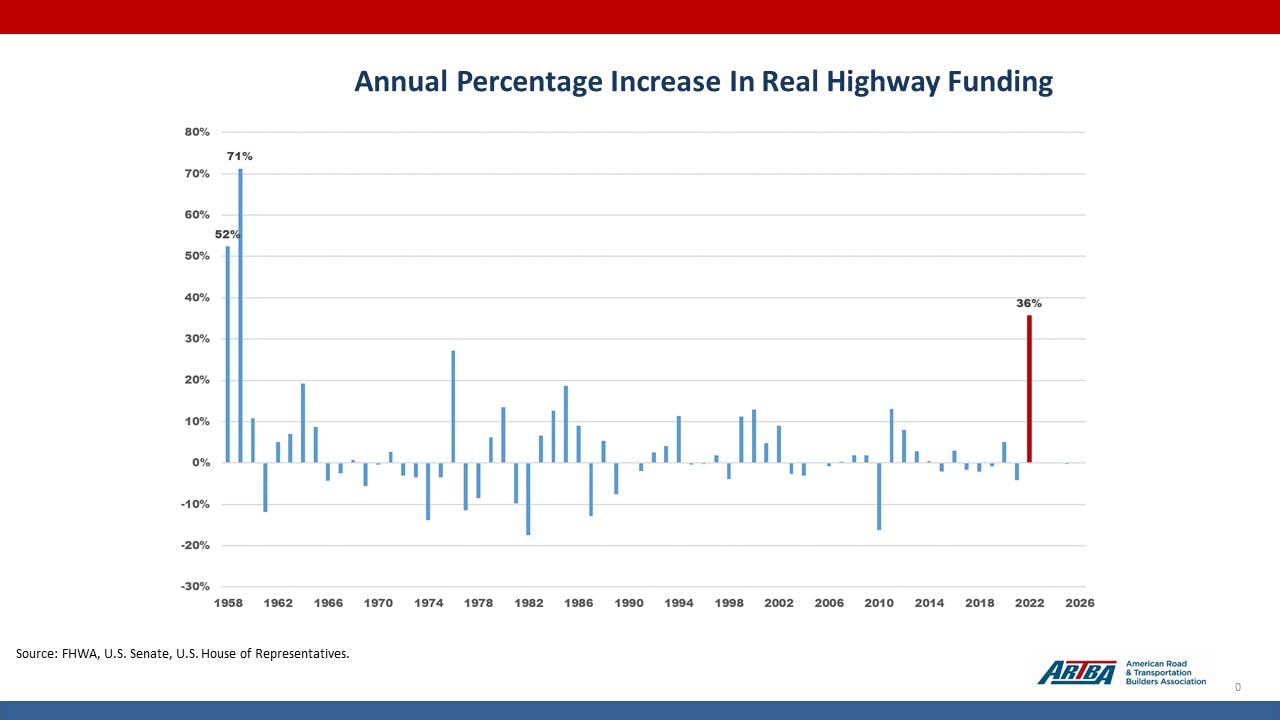 “The Infrastructure Investment and Jobs Act is the most significant measure in more than 50 years to meaningfully address the condition and performance of the U.S. transportation network,” says ARTBA President and CEO Dave Bauer.

With record spending levels set for roads, bridges, utilities and other infrastructure, contractors around the country could see work from it for the next five years and longer.

Richard Branch, chief economist for Dodge Construction Network, says the additional infrastructure funding should start to come through next year. The years with the strongest influence on construction starts should be 2023 through 2025, he said.

“Our models are suggesting that, thanks to that $550 billion in new infrastructure spending, total non-building (construction) starts will increase by 33% by the time we get to the end of 2026,” he said during Dodge’s annual 2022 construction industry outlook event November 3. Non-building construction includes highways and bridges, environmental public works, and power and gas projects.

The infrastructure bill passed the House in a 228-206 vote, with 13 Republicans voting yes. Six progressive Democrats opposed the bill in protest over the House skirting a vote on the $1.75 trillion Build Back Better Act. That bill includes such measures as funding for pre-kindergarten, expanded healthcare coverage and environmental initiatives. They had wanted the bill voted on first before the infrastructure bill, but as the day’s debate extended into the night, House leadership instead called for a vote on setting the procedures for a floor debate on the bill. That passed 221-213.

The Infrastructure Investment & Jobs Act passed the Senate in August in a bipartisan vote.

What’s in the bill?

Here are highlights of the additional spending called for in the infrastructure bill: