There’s a lot to consider when buying a new skid steer.

Along with deciding on the brand and model best for your business, you’ll need to figure out the best attachments for the machine.

Another consideration is how experienced is the operator. Since less-experienced operators tend to start out on skid steers, you’ll want to consider features that make it easier for them to get up to speed.

And then there’s the question of whether you’re ready to consider a battery-powered machine, now that the first electric skid steer has hit the market.

In this report, we tackle these questions and more while providing a glimpse of the latest models to help you buy your next skid steer. 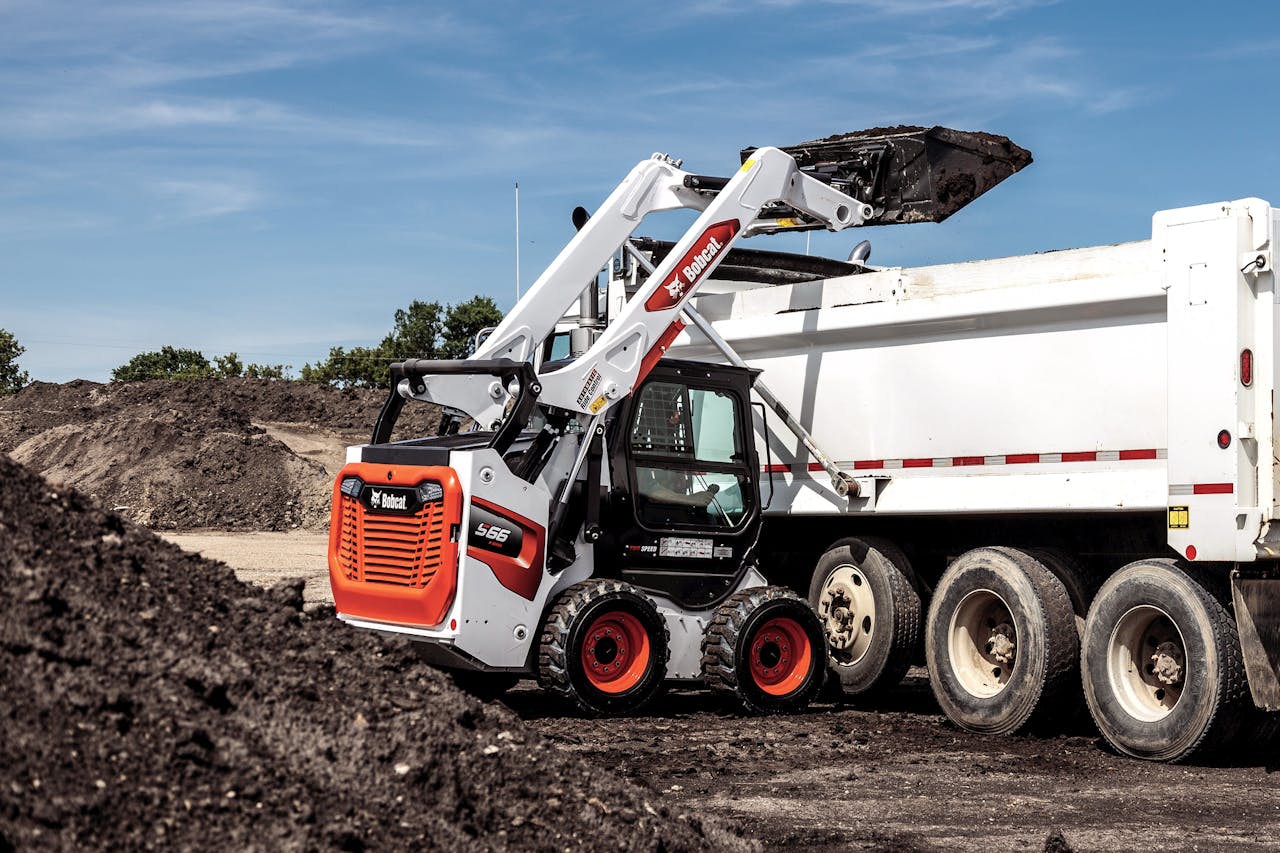 The 74-horsepower Bobcat S66 has a 7,154 operating weight. Bobcat Super Float tires are standard and provide precision turning, skidding and maneuverability with minimal soil disruption. System pressure is 3,500 psi. Standard flow is 17.6 gallons per minute; optional high flow is 26.9 gallons per minute. The Bob-Tach mounting system makes attachment changes quick and easy.BobcatSkid steer loaders are prized for their versatility, but they’re only as versatile – and valuable – as their attachments.

So which attachments provide the greatest value?

“Buckets and grapples offer great value,” says Joel Hedlof, product specialist, loaders, Bobcat, “but if you’re handling pallets, neither will provide much value to you.

“If you do asphalt work, a cold planer or sweeper might provide the greatest value.”

“Someone made something in their garage that perfectly suits a niche market, or the compact industry moves into new applications, and attachments serving larger equipment in those markets get scaled down to fit compact machines.”

With so many skid steer attachments already on the market and new ones arriving frequently, how do you decide whether to invest in another new attachment? How do you know if that purchase will boost profit?

John Dotto, product application and training specialist, Wacker Neuson, says the attachment should satisfy one of two conditions – both, if possible.

First, the attachment should improve the efficiency of a task you’re already doing.

Second, the attachment should allow you to bill out more work on a single jobsite by expanding the work you offer.

Dotto also emphasizes the difference between productivity and efficiency. Hiring more labor increases productivity but increases associated costs. Increase the efficiency of the skid steer, and productivity is increased without additional ongoing cost. 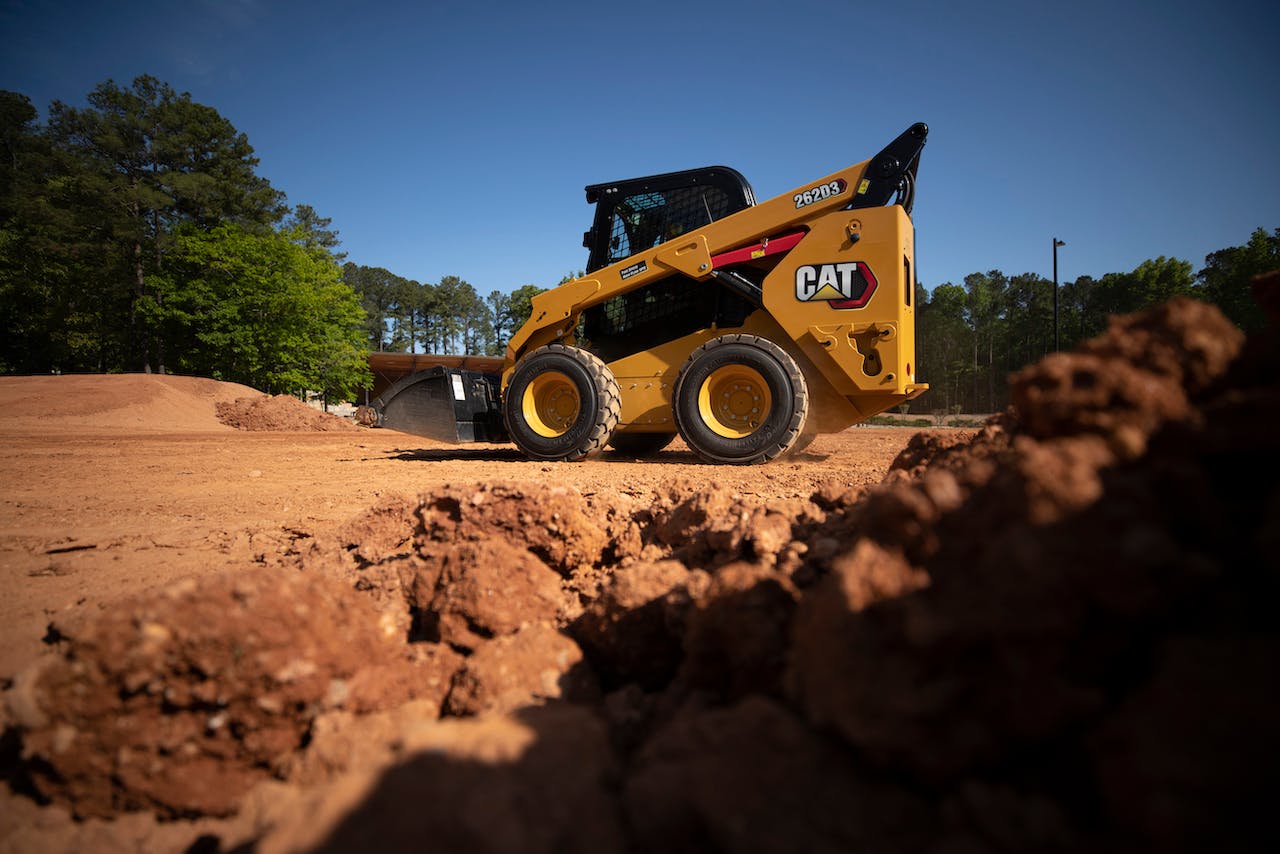 “Recognize that utilization rate isn’t always going to work out for attachments,” he says. “Snowblowers, for example, are going to sit idle for quite some time. But they still provide value by opening up income opportunities at a time of year when few other income opportunities exist.” Better to have your snow attachment sitting idle for seven months than to have your skid steer sitting idle all winter.

Mulchers are seeing robust growth, says Ethan Clowes, product manager for skid steer and backhoe loaders, JCB. Their traditional applications of land clearing and site development remain strong, but they’re increasingly being used for vegetation management in lieu of prescribed burns, which are outlawed in many areas.

Matching the attachment to the application and the skid steer is essential. Dealers are the best resources for this; they know what’s available from which manufacturers and what works best in their market area. 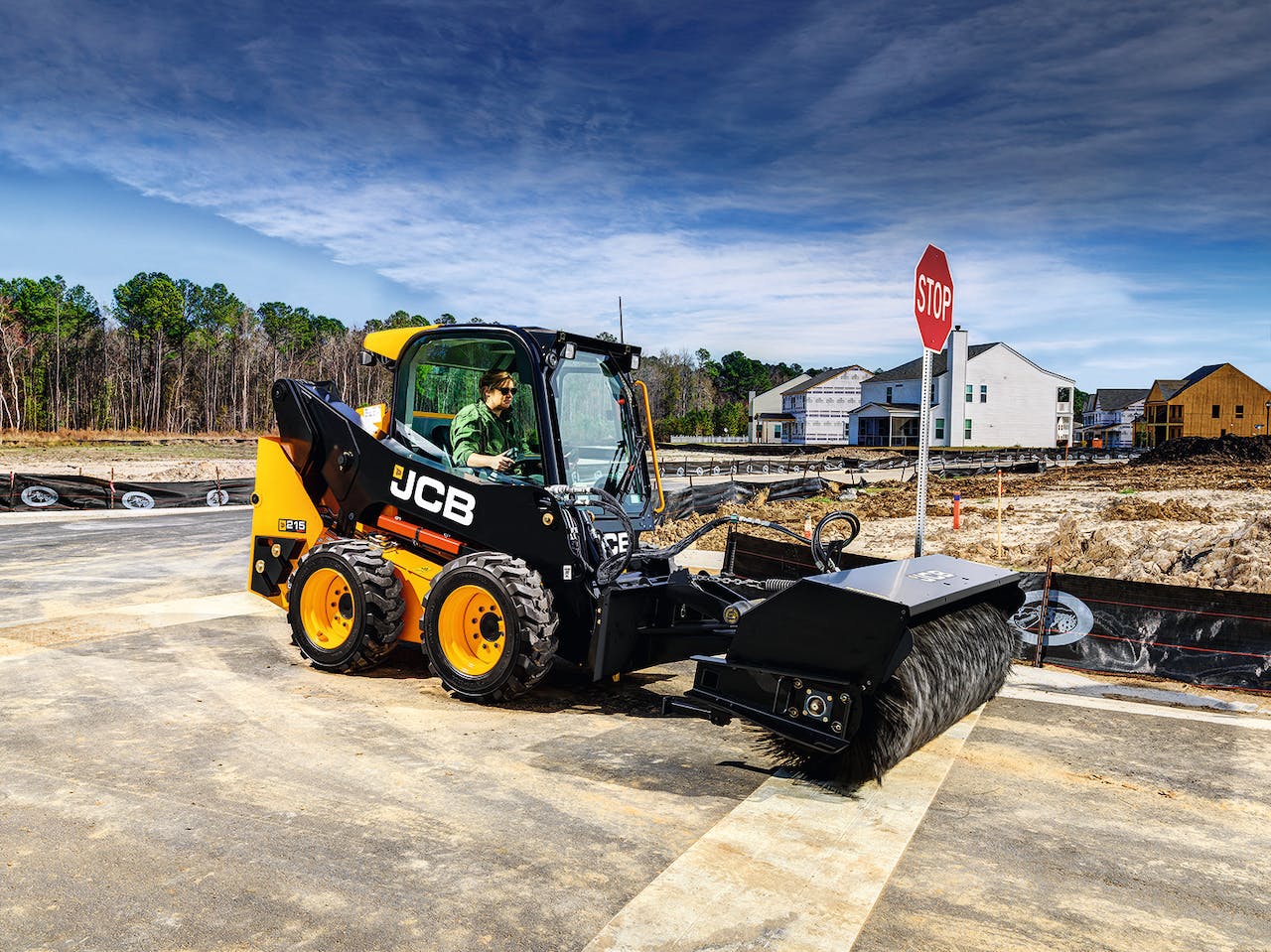 The JCB 215, with a rated operating capacity of 2,112 pounds, is a small-platform, vertical-lift skid steer loader with the power and hydraulic flow of a large-platform machine, the company says. It is ideally suited to lifting and loading at height and operating a variety of attachments.JCBSome skid steer OEMs offer their own attachments, whether products they make, or have private-labelled for them by attachment manufacturers. Some develop a relationship with attachment specialists.

JCB does both, says Clowes. “We offer a wide range of common attachments but leave the highly specialized, niche products to others.”

Clowes says JCB’s single-arm design with side entry is a consideration with large attachments. “With a traditional front-entry design, for example, a rock saw can be a two-person job: one in the cab of the machine and the other on the ground to set up the saw. With our side-entry design, a single operator can do both.”

Clowes points out that while buckets and forks are commonly used with the JCB Teleskid, most attachments are compatible with and benefit from its extended telescopic reach. 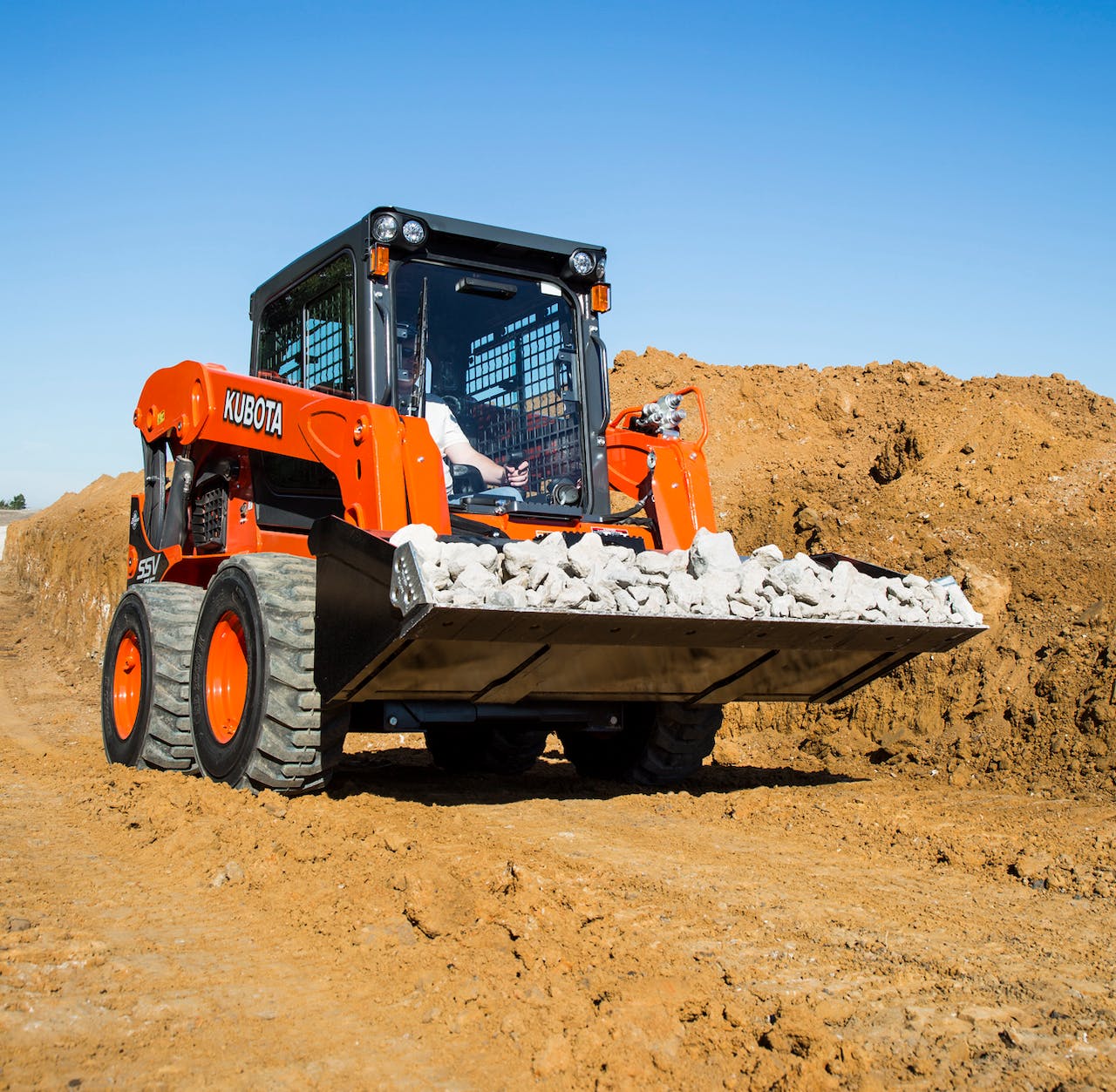 The 74.3-gross-horsepower Kubota SSV75 has breakout forces of 5,884 pound-feet for the bucket and 4,850 pound-feet for the lift arm. ROC is 2,690 pounds, and operating weight is up to 8,422 pounds. Flow is 20.9 gallons per minute and pressure is 3,271 psi. The vertical-lift arm design is borrowed from Kubota’s compact track loaders and provides pushing and digging performance comparable to a radial-lift machine.KubotaPatrick Baker, product manager, construction equipment, Kubota says, “Smarter, more tech-savvy attachments like the Land Pride Earthworks GO grading system are available through Kubota’s partner, Land Pride.” He says Land Pride also offers a new stump grinder and a combo bucket for use with Kubota skid steer loaders.

Matching attachments to an electric skid steer, such as the Kovaco Electric Elise 900, has an added dimension, says Joe Schinasi, Kovaco Electric Business Development, Americas. Of the more than 40 attachments available for the Elise, several are hybrid, combining both hydraulic and electric power from the skid steer. “The design is optimized to use the most efficient power profile from the Elise for the application.”

Coleman points out that Caterpillar SMART Technology continues to expand. SMART Technology optimizes the interface between a skid steer (or compact track loader) and its attachment. Performance is improved, and operator control functions are matched to the attachment.

When first available in early 2020, the list of SMART attachments for skid steers was short: Dozer Blade, Grader Blade and Backhoe. That list now includes cold planers and rock saws with the introduction of Cat’s new Smart Creep feature that automatically optimizes the machine’s travel speed when using these attachments.

Buck Storlie, ASV product manager, says that while new attachments are constantly hitting the market, many advances result from the application of existing technology to the skid-steer attachment market.

Lasers are making inroads, and although skid steers are not considered the best machines for finish grading (compact track loaders are preferred due to their greater stability), a skilled operator using laser guidance can get good results from the skid steer the contractor already owns.

Storlie says not all technology is electronic; that it also includes basic design technology.

Mulchers benefit from these types of advances. “Drum mulchers are higher cost but produce finer mulch,” he says. “Disc mulchers are less expensive, but getting the fine mulch from a drum mulcher takes extra time, if that’s the desired product.”

Even buckets have built-in design technology, according to Storlie. “The heel height and cutting-edge height of ASV buckets allow the buckets to sit properly on the ground.”

Despite the wide range of new attachments and new technologies, Storlie says the 4-in-1 bucket still provides the best value for many skid steer owners. “It’s the most versatile attachment and probably the most underappreciated.”

Getting operators up to speed 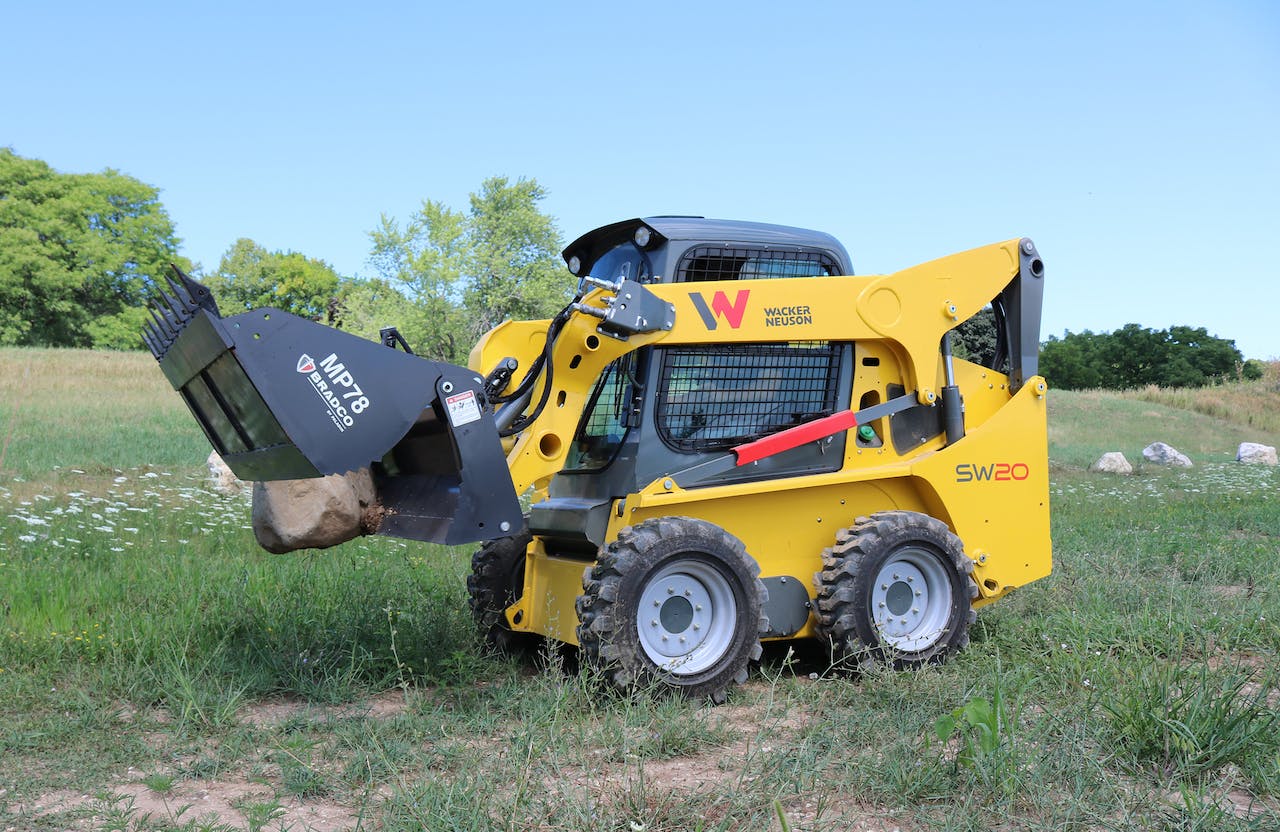 So what’s the best way to train these operators?

“Use three points of contact when entering and exiting the machine. Identify the emergency exits and learn emergency procedures related to machine function. Avoid sharp turns and quick starts and stops.”

Along with these and other fundamentals, Dotto says, operators should read the owner’s manuals for the skid steer and all attachments they’ll be using.

Beyond specific practices, he says, operators must appreciate fundamental concepts such as center of gravity and dynamic load and how they are continually changing in response to multiple factors.

“Become familiar with how the machine moves,” adds Bobcat’s Hedlof. “Learn the footprint of the machine. Start in an open area, maybe moving piles of material. Get comfortable with the machine before working up alongside a building or a truck. Learn how the loader reacts to your commands.”

Bobcat offers skid steers with hand and foot controls and joysticks. Hedlof says hand-and-foot is intuitive, while Bobcat Selectable Joystick controls are lower effort and offer ISO and H-pattern functionality. M- and R-Series skid steers with joystick controls offer a Drive response setting that adjusts the machine’s reaction to operator inputs. “Newer operators may benefit from a smoother response until they grow more comfortable and familiar with the machine.” 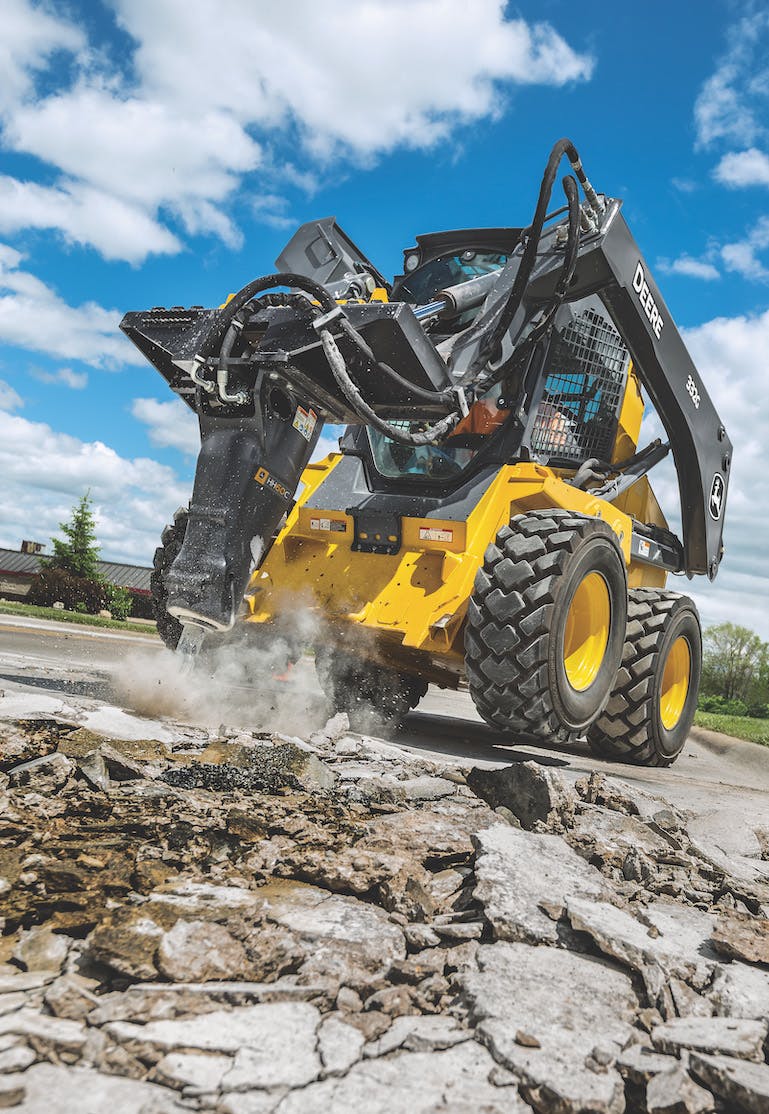 An available LED lighting package helps in low-light conditions. The operator’s station gives good visibility to the work area, especially to the outside of the wheels.

The performance of less-experienced operators comes close to that of seasoned pros when they have access to advanced machine features. Gribble points to the Deere EH Boom Performance Package as an example.

Featured on large-frame G-Series machines, the package automates repetitive tasks. Integrated on-board grade indication is optional on large-frame models. The option on the 330G and 332G provides cross-slope (roll) and main fall slope (pitch), viewable as either degrees or percentages on the in-cab monitor.

Standard features are key to the value of Kubota’s two skid steer loaders, the SSV65 and the SSV75, says Baker.

Those features include two-speed travel, a slide-up front entry door making it easier to get into and out of the cab, cab climate control, and side lighting for better visibility and safer night operation. 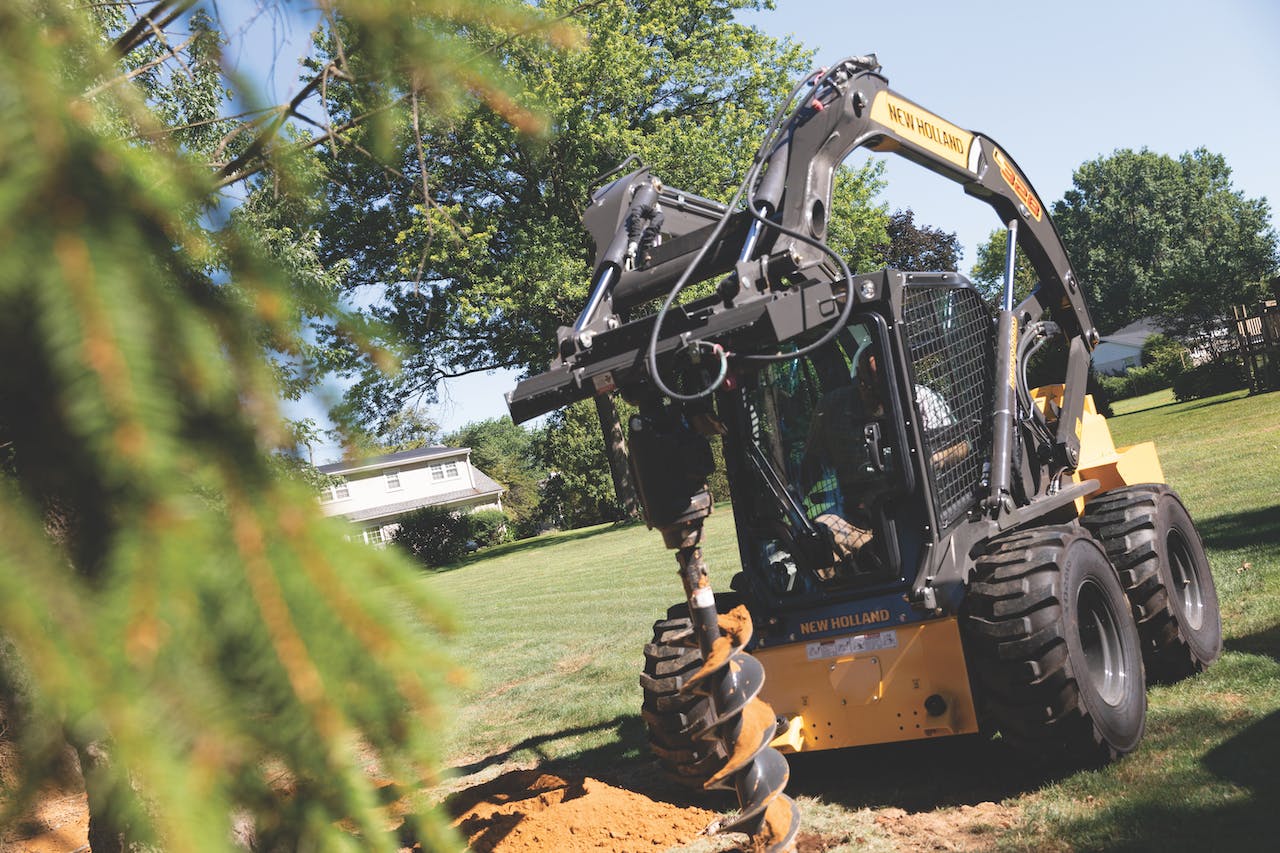 EZ EH controls have three factory presets plus one user-settable preset to match machine response to conditions and operator preferences. 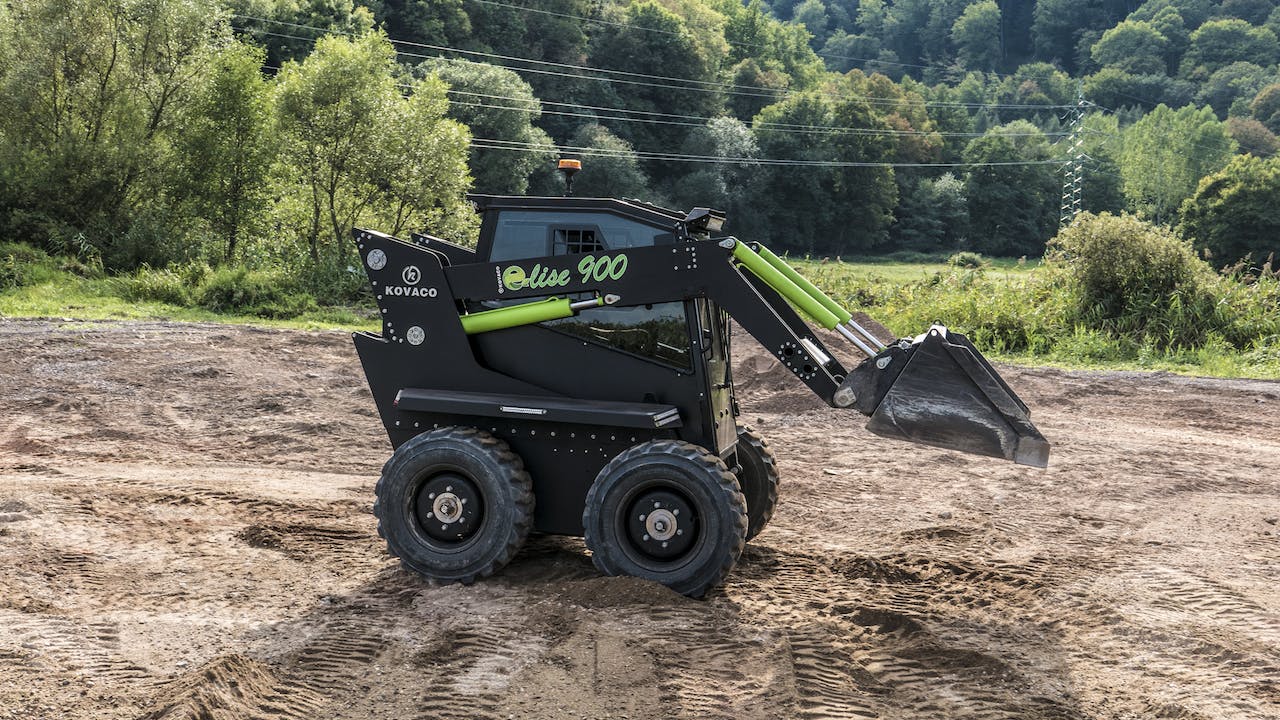 Kovaco Electric’s Elise 900 electric skid steer has three electric motors of 36.2 (max) horsepower each and 89 foot-pounds of torque, each. Flow is 17.17 gallons per minute and peak pressure is 2,611 psi. ROC is 1,984 pounds. The standard 240 Ah battery provides up to six hours of runtime and 100% charge time of 5.3 hours. The optional 400 Ah battery provides eight hours or more runtime and charges to 80% in three hours. Runtimes vary by application.KovacoKovaco Electric is the North America distributor for Kovaco Equipment, which is headquartered in the Czech Republic. One of the two machines it imports is the Elise 900, an electric skid steer, which is the first electric skid steer to hit the market.

The standard battery is 240 Ah; a 400 Ah battery is optional and offers eight hours or more runtime, depending on the application.

Batteries are sealed lead acid, “which provides better balance and keeps the Elise cost-competitive at initial acquisition with diesel skid steers,” says Schinasi. “Ongoing costs are, of course, much lower than diesel.”

He says lithium-ion batteries will be available by the end of the year, and the company is looking into lithium-iron batteries for future use.

“Battery technology is advancing very quickly,” he says, “and Kovaco wants to make sure new designs make sense for our customers.”