South Carolina’s “Malfunction Junction” will eventually earn the name of “Carolina Crossroads” as work is scheduled to begin this month on untangling the congested, dangerous interchange at I-20, I-26 and I-126 in Columbia.

The reconstruction – South Carolina’s largest infrastructure project in its history – is estimated to cost $1.7 billion and take eight years to complete. Gov. Henry McMaster and other dignitaries attended a groundbreaking Monday, and the SCDOT says work will begin in two weeks.

The work involves widening 14 miles of interstate highway in five phases. A joint venture of Archer Western and United Infrastructure won the $210 million contract for the first phase. It will include reconfiguring the Colonial Life Boulevard interchange on I-126, as well as improvements on I-26 toward U.S. 378.

Archer-United also won the $127 million contract for the second phase, which will update the Broad River Road interchange at I-20 and lengthen the I-20 westbound access to I-26 West. Both phases are expected to be completed by the end of 2024. The remaining three phases have not yet been awarded. 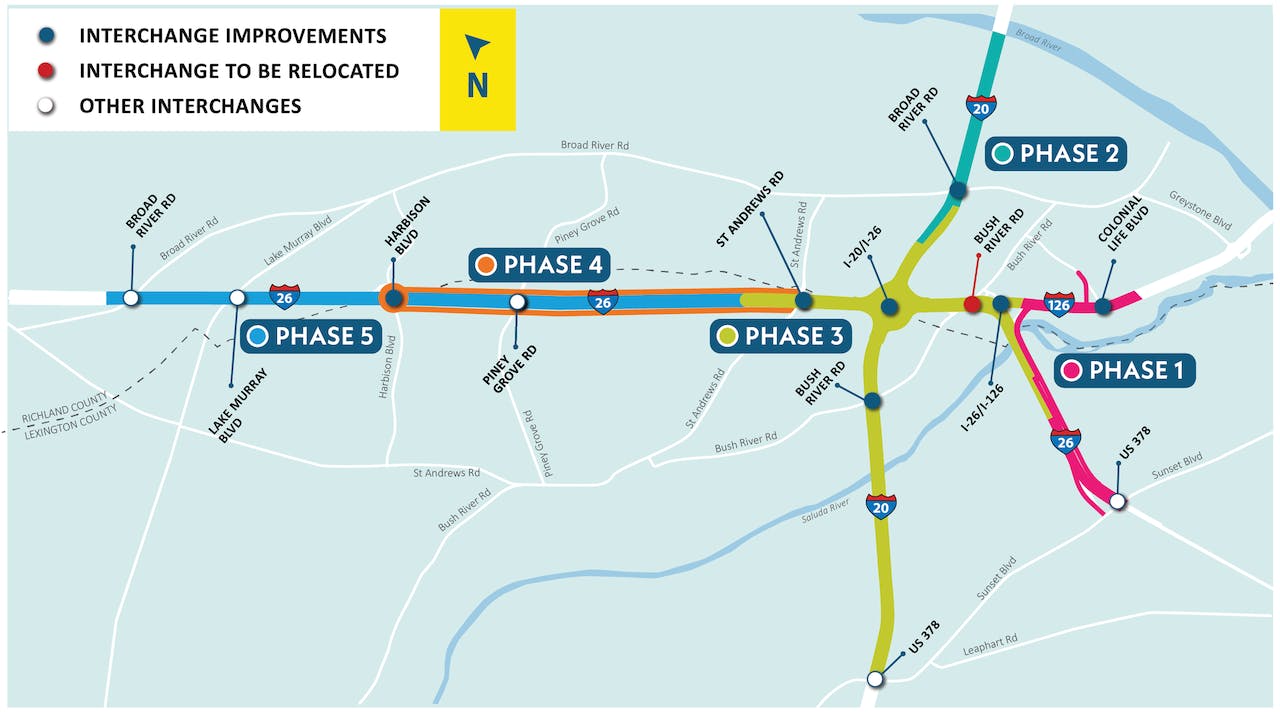 The rebirth of “Malfunction Junction” into Carolina Crossroads will occur in five phases.SCDOTAlong with widening 14 miles of interstate, the entire project involves building 43 new bridges and 132 new lane miles; reconstructing seven interchanges, including replacing outdated cloverleaf loops with modern ramps; and creating safer interchange exits that are farther apart and separated from other interstate traffic, according to SCDOT. The project is funded 90% federal and 10% state.

The three-interstate interchange is traveled by more than 134,000 vehicles each day, SCDOT says, causing more than 112 hours of traffic delays each year due to congestion.

The roadways are outdated, built in the 1950s and 1960s with the last updates in the 1970s and 1980s, according to SCDOT. The region is also expected to see a 70% population increase by 2024, causing even more traffic congestion. The agency says the interchange sees a higher crash rate than other freeway-to-freeway systems in the state.