In 2007, Brian and Kristin Gruhot were faced with a choice.

The owner of D&G Excavating, Dave Gruhot, had decided it was time for him to get out of the business. He told his son and daughter-in-law they needed to find another job or buy the company.

“I didn’t want to find another job,” recalls Kristin. “I loved what I was doing.” 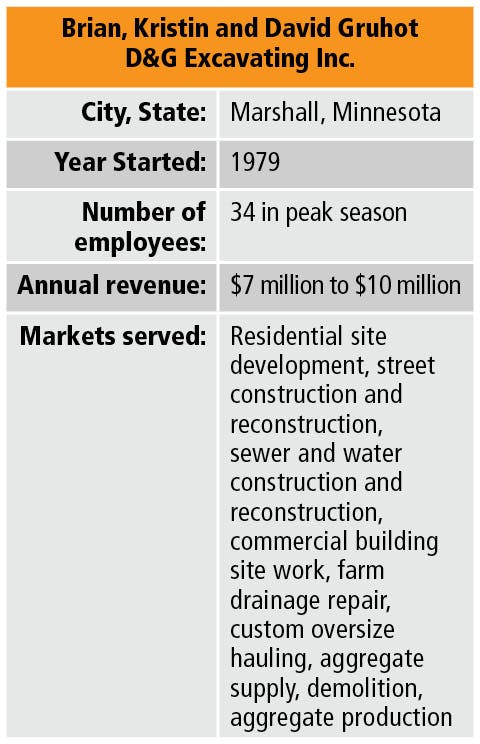 Equipment WorldWithin a month, all the documents were signed, and the couple were the new owners.

Then the Great Recession hit.

The company had done a lot of work for the city of Marshall, Minnesota. For the next two years, no building permits were issued in the city. All construction had stopped. All that was left were some small jobs on farms.

The company had to downsize, sell equipment and trucks. The bank pulled its line of credit.

The one thing that saved the new owners was a large life insurance policy they were able to take out a loan on to keep the company going. Their accountant didn’t think they would survive.

But thanks to their determination, solid reputation and willingness to take on most any job, the company pulled through the hard times and has been steadily growing ever since. D&G was chosen as one of Equipment World’s 2021 Contractor of the Year finalists. It’s actually the second time the company has been chosen a finalist. Brian and Dave Gruhot were selected in 2003.

Since then, the company has continued to grow and innovate, including starting its own daycare center for employees’ children. (More on that later.)

“My father-in-law used to joke around that we’re not in the business to make money, we make friends,” Kristin says of Dave Gruhot who passed away in 2008. “A lot of what we do are our repeat customers because of the relationships that we’ve built.” 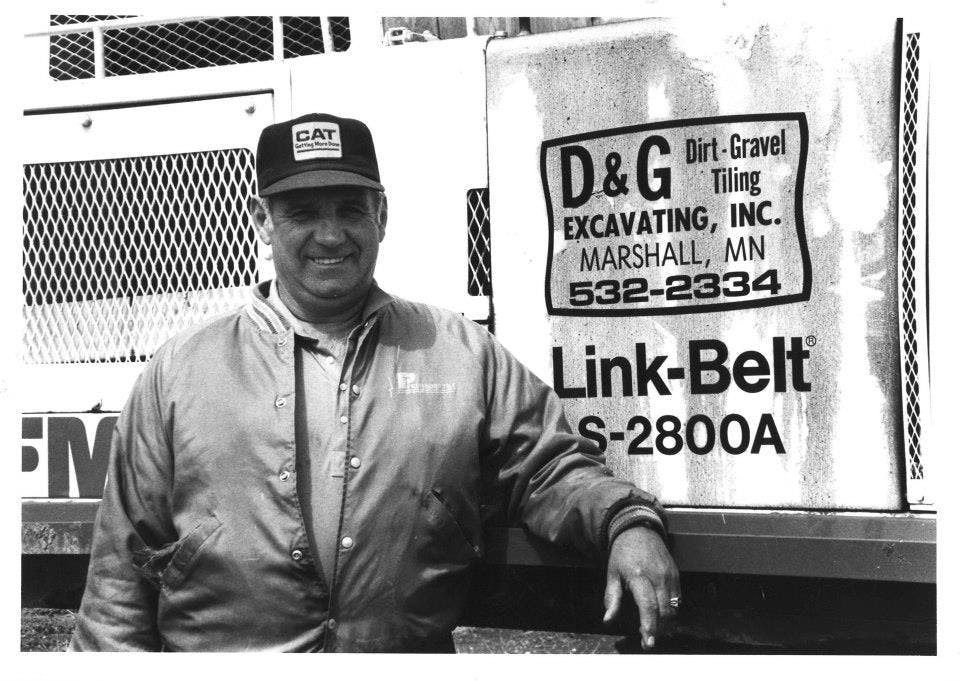 Dave Gruhot started D&G Excavating in 1979. Now, a third generation of the family is moving into leadership.D&G ExcavatingThose relationships include nearby municipalities. “If something happens, we are the ones that get the call,” she says. “We’re not the only excavating contractor in the area, that’s for sure, but we probably have the best reputation.” D&G has also been a preferred contractor for the nearby Schwan’s and Archer Daniels Midland plants. It also performs a lot of residential work.

David Gruhot, Brian and Kristin’s son, has grown up with the business and joined the company when he was 16. He began working full time after he graduated from college in 2014.

He says the company is willing to take on emergency work. If there’s a fire, D&G stands ready to bring out an excavator to help fight it. The company also performs most of Marshall’s snow removal. “We do answer the phone 24 hours during the wintertime,” Kristin says.

Before the recession, the company expanded into water and sewer work. That complemented its street construction and reconstruction projects. D&G will install all new drainage, water and sewer lines, then perform all the subgrade and grading work. It subcontracts out the paving.

It has also branched out into nationwide customized heavy hauling. And it supplies and delivers aggregate, doing its own rock crushing and screening. It’ll even deliver decorative rock for local homeowners’ landscaping projects.

David believes that diversification has helped the company keep growing. “I think that’s why customers keep coming back is because we’ll do almost anything,” he says.

“D&G is by far the best and most reliable excavating contractor in the area,” says Greg Bladholm of Bladholm Construction. “They are on the job when they’re supposed to be. Their employees are knowledgeable about the work they are to perform, and they are very honest and fair.”

Today, D&G has 34 employees during peak season. It works to retain them by providing good pay and benefits. Many of the employees have been with the company since the early 1980s. “We actually have a very good retention rate of our employees,” Kristin says. “Once they come here, they retire here.”

Kristin also came up with an innovative incentive that has proved popular with attracting and retaining young workers. An old post office closed nearby and went up for sale. The company bought it and turned it into an employer-sponsored daycare for employees’ children, with the company paying half the rate.

“It definitely is a cost to the company, but also an added benefit,” Kristin says.

There’s a lack of daycare in the area, and the ones that are open have limited hours of 8 a.m. to 5 p.m. That doesn’t work well for construction employees who have to be on the job at 6 a.m. and work 12-hour days during Minnesota’s six-month construction season.

In contrast, the D&G facility – called Li’l Diggers Day Care – stays open from 6 a.m. until the last child is picked up. It’s open to 12 children. Currently all are D&G employees’ children, but it will accept other kids if there is space.

“Their investment into the community goes far beyond what most people see,” says Ty Brouwer, territory manager at Ziegler Cat. 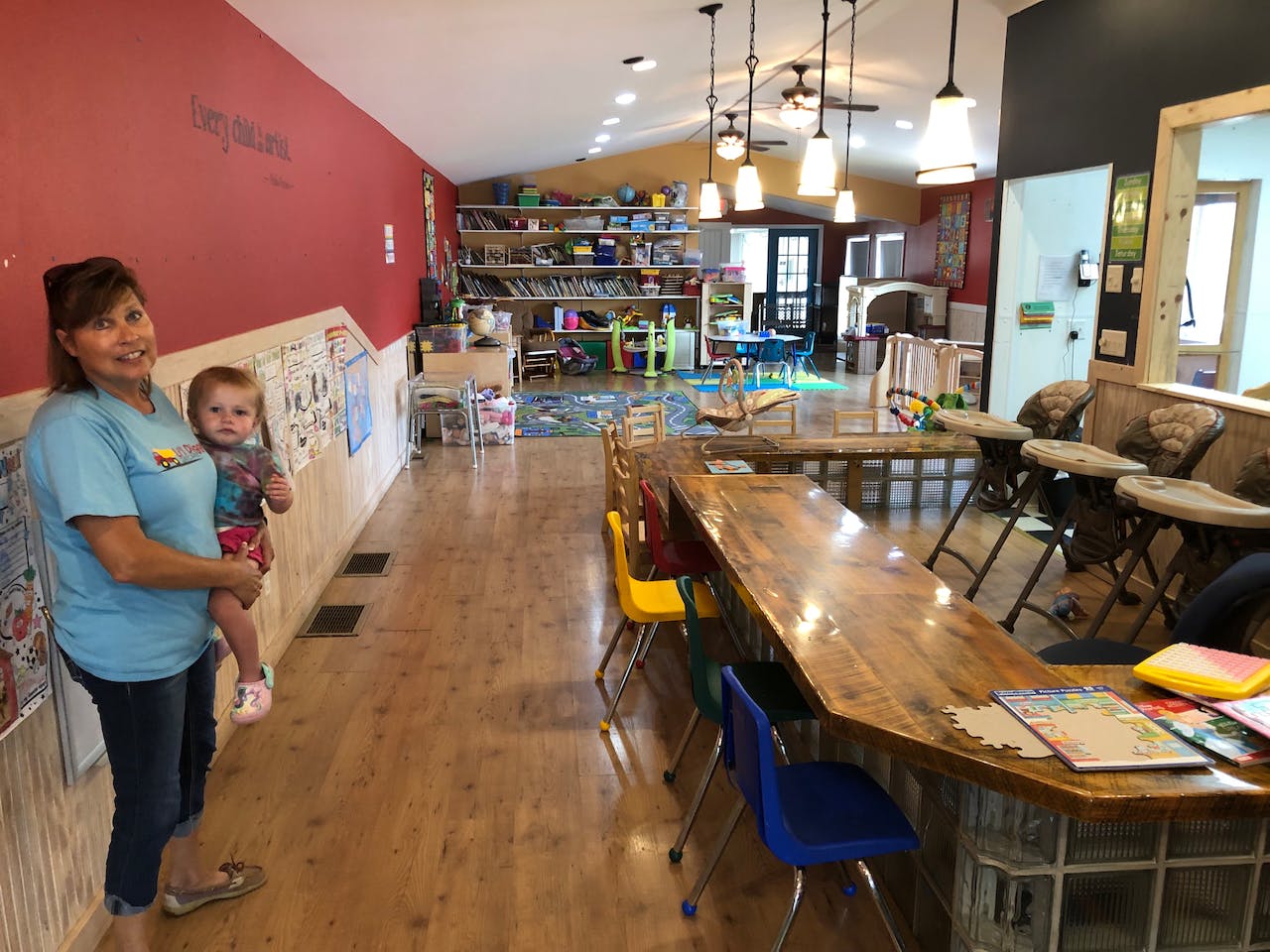 Sandie Polfliet runs Li’l Diggers Daycare, which D&G Excavating started for employees’ children.Equipment WorldDespite the daycare and other extra efforts, attracting young workers in the area has been a challenge, as it has been around the country. They have had some success through Facebook and Instagram. Most, though, have been people David knows or are familiar with.

The company has participated in trade shows to try to find workers. It’s even started reaching out to children, who may one day enter the construction field. They invited a nearby elementary summer school program for a field trip. They lined up their construction equipment, and David performed demonstrations.

“We got them all safety vests, and they all sat on a flatbed and watched the equipment work,” Kristin says. “And then after everything was parked, they got to climb up in it and on it.”

As for equipment, D&G typically buys new excavators and skid steers and low-hour used dozers and motor graders. The company rents when it needs an extra piece for a project, but not often. It usually keeps its larger equipment for 10 years.

Two mechanics keep the machinery running and maintained. They are able to do most work in-house, including major engine, truck transmission and undercarriage repairs.

D&G has also been expanding into machine control. David started with a GPS-based rover. An excavator has been equipped with 2D grade control, and the company is considering adding machine control to a new motor grader. The goal is to add the technology as older machines are traded in.

David found excavator 2D control helpful last summer when the company was shorthanded. On a street reconstruction project, he was able to perform the sub-cutting on his own with the excavator while another operator dug the drainage. A four- or five-worker job was reduced to two operators. The 2D control has also helped with digging basements and building footings.

Kristin has been a big proponent of increasing technology in the office. She had no experience in construction before she joined the Gruhot family, but she did know it needed a computer.

At the time, in 1992, the company was operating out of her new in-laws’ basement. And everything was done by hand.

Today, the company relies on iPhones, iPads and Mac computers that are all synched to the company calendar for jobs, special instructions and delivery ticketing. They also use Apple TV on a large screen for interactive training.

“Nobody can claim that they don’t know what’s going on,” she says. 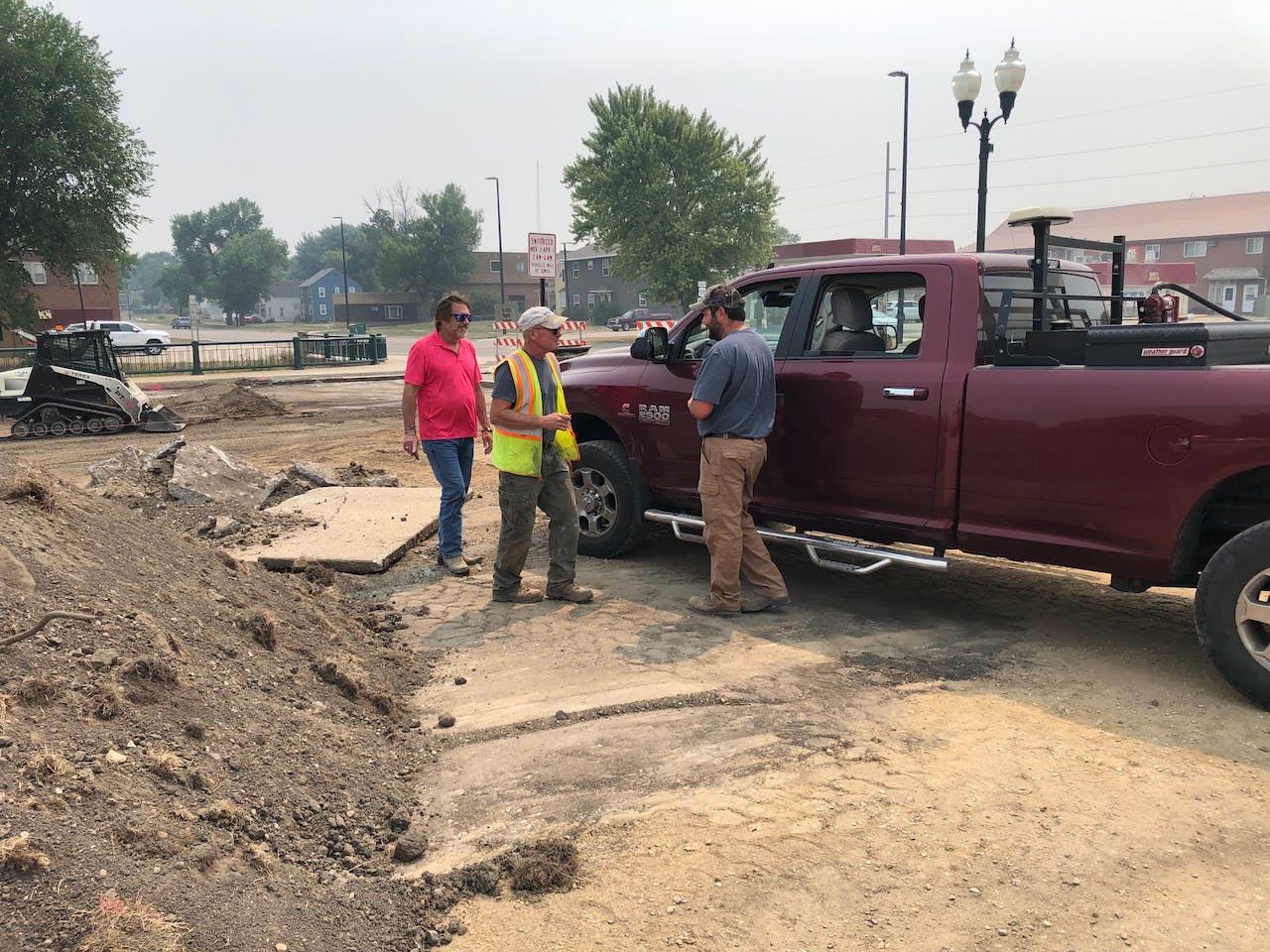 One of D&G Excavation’s specialties is street reconstruction, including road grading and underground utilities. Above from left, Brian Druhot, underground supervisor Rich Bartz and David Gruhot on a street reconstruction jobsite in Marshall, Minnesota.Equipment WorldThrough it all, Brian has kept the company’s crews and projects running efficiently. He also estimates and bids the jobs. He’s worked for the company for as long as he can remember after his father started it in 1979.

“I would get off the bus and go to work every day, that’s all I ever did,” he says.

His main job starting out was running the equipment, mostly an excavator, which he did for 20 years. He didn’t get many days off.

“I got a half a day off to marry her,” he says and laughs.

When he met Kristin, she didn’t know what a backhoe was. “We’d be out on a date, and he’d get a call that there was an accident or fire, and he would have to run out, load up the machine and go out on emergency response,” she recalls. “He’d bring me along to all these unfortunate events. But it was actually quite thrilling and I liked it.”

Brian has also helped maintain the company’s close business relationships over the years. “I’ve always liked the owners I’ve worked with, because I grew up working with their dads,” he says. “And now their kids are in it, my age or younger. So now I’m working with them. And we’ve always gotten along with our working relations with them.”

After more than 40 years in the construction business, though, Brian is starting to look to retirement. He and Kristin are helping David to one day take over, bringing in a third-generation of leadership to D&G.

David is the company’s main road grader operator and a supervisor. He’s also been estimating projects.

“I grew up around it, so it’s all I’ve really ever known,” he says. “I like running the equipment. It’s nice to be able to see the work you’ve accomplished. You can drive around town and say, ‘We did that and we did that.’ It’s kind of a good feeling.”