Therapy for Chip Kronau is 10 hours on a dozer.

“Leaving the phone in my truck and to go out and grade a parking lot or something, that’s just like heaven to me,” he says. 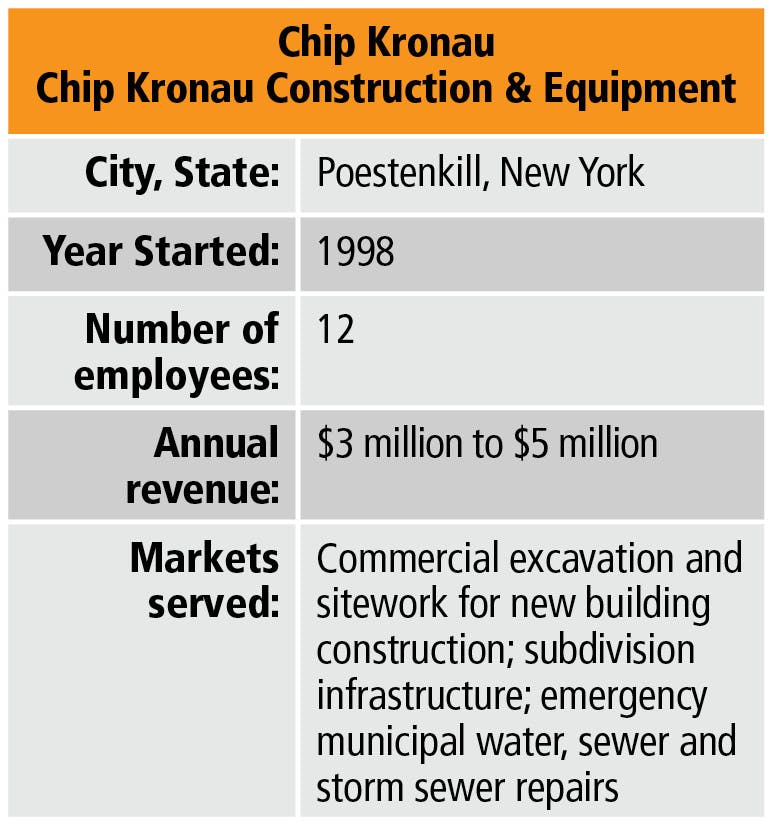 But the owner of Chip Kronau Construction & Equipment in Poestenkill, New York, doesn’t have that much time these days for pushing dirt. Despite being shut down for two weeks during the pandemic, the company has been its busiest ever. That puts him out on the company’s multiple jobsites every day making sure the work meets his high standards for quality and safety, or in the office making sure the company is getting paid and the work keeps coming in.

The bulk of the company’s work is private commercial, such as excavation and site work for convenience stores, storage companies and nursing homes. It also performs emergency utility repairs for local municipalities.

It has grown from $300,000 in volume in 1998, its first year, to $3 million to $5 million annually. The company has steadily added loyal customers over the years and has advanced into 3D machine control on its equipment to increase production and performance. It has also added software to electronically keep up with real-time job costs to streamline operations.

For those reasons and more, Chip Kronau Construction & Equipment is one of Equipment World’s 12 Contractor of the Year finalists for 2021. 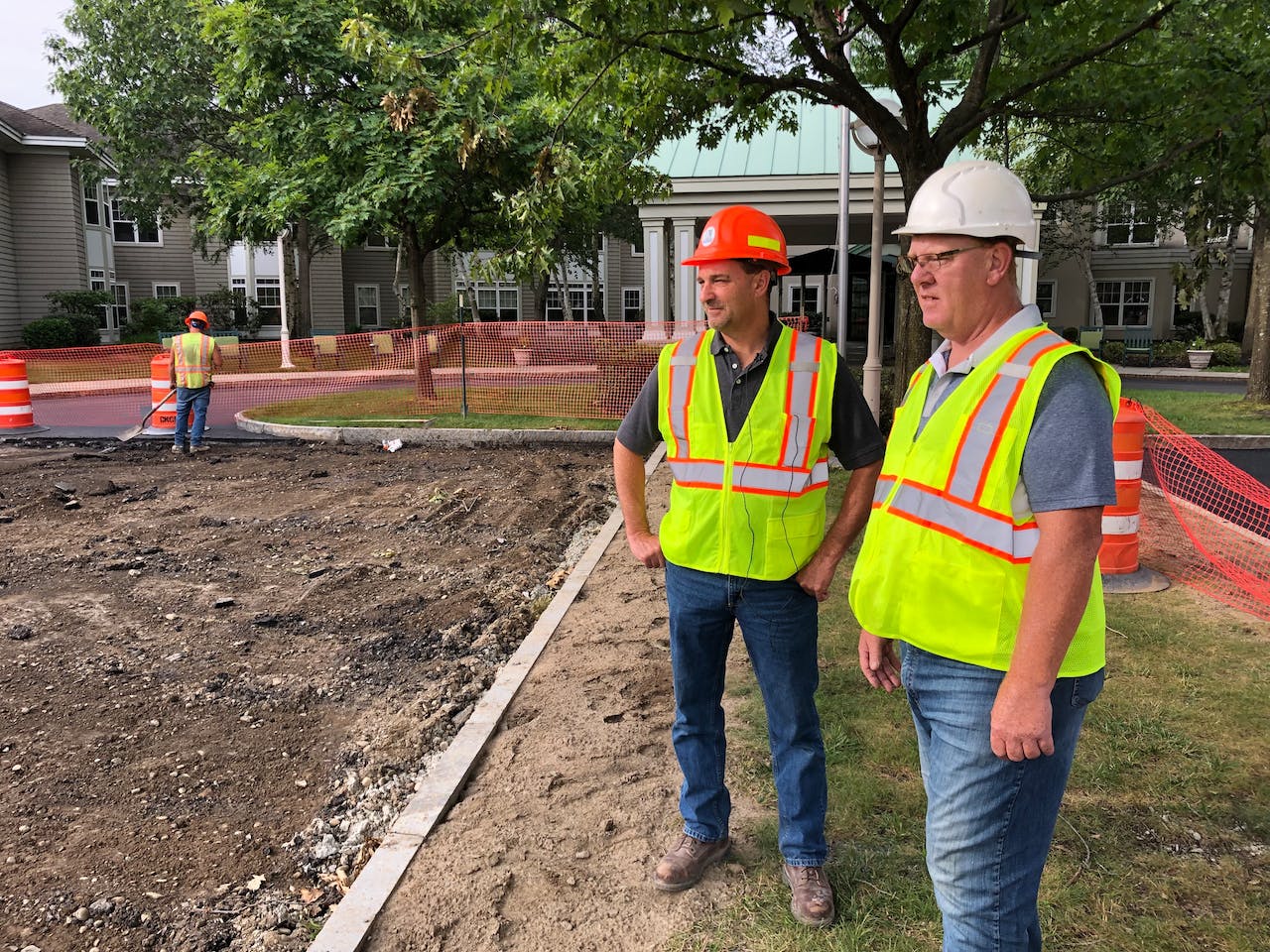 Chip Kronau with Ron Brock, who helped start Chip Kronau Construction & Equipment in 1998.Equipment WorldChip’s introduction to the industry came through his father who started a residential construction business. At an early age, Chip would go on the jobsites with his father, and by 10, he was operating a dozer.

“Dad said when you’re old enough to reach the pedals, you can start to learn,” Chip recalls and laughs. “So the next week, I got some blocks of two-by-fours and stuff from one of the jobsites that he was working on and taped them up on the pedals and said, ‘We’re good to go.’”

He was too small to sit in the seat. He would stand as he operated it.

“And then it kind of just took off from there,” he says. “Pretty much all throughout high school during the summers, I would work for him.”

He was joined by Ron Brock, who also worked for Chip’s father.

“It was basically the two of us, and then we hired one other guy and built it up over the years,” he says.

They started on residential work and after a year began landing commercial jobs. The big break came when they got a call from New York-based Stewart’s Shops, which owns hundreds of convenience stores.

“We finished a site that another contractor started but couldn’t keep up with the schedule,” Chip recalls. “And we’re still doing work for them today. They’re one of our major clients.”

The Stewart’s projects are quick jobs on a tight schedule with lots of other crews on a confined jobsite. You’re also expected to respond at a moment’s notice.

“If they call, you pretty much drop what you’re doing, and you take care of what they need,” he says. “We developed a good relationship with them.”

Chris Potter, a project manager for Stewart’s Shops, would agree.

“They have been one of our top picks since they started working for us over 20 years ago,” he says. “We have very tight schedules for our projects, and they have never failed to meet a completion date, and the quality of work is always topnotch. As a project manager, hiring Chip Kronau Construction makes my job easier.” 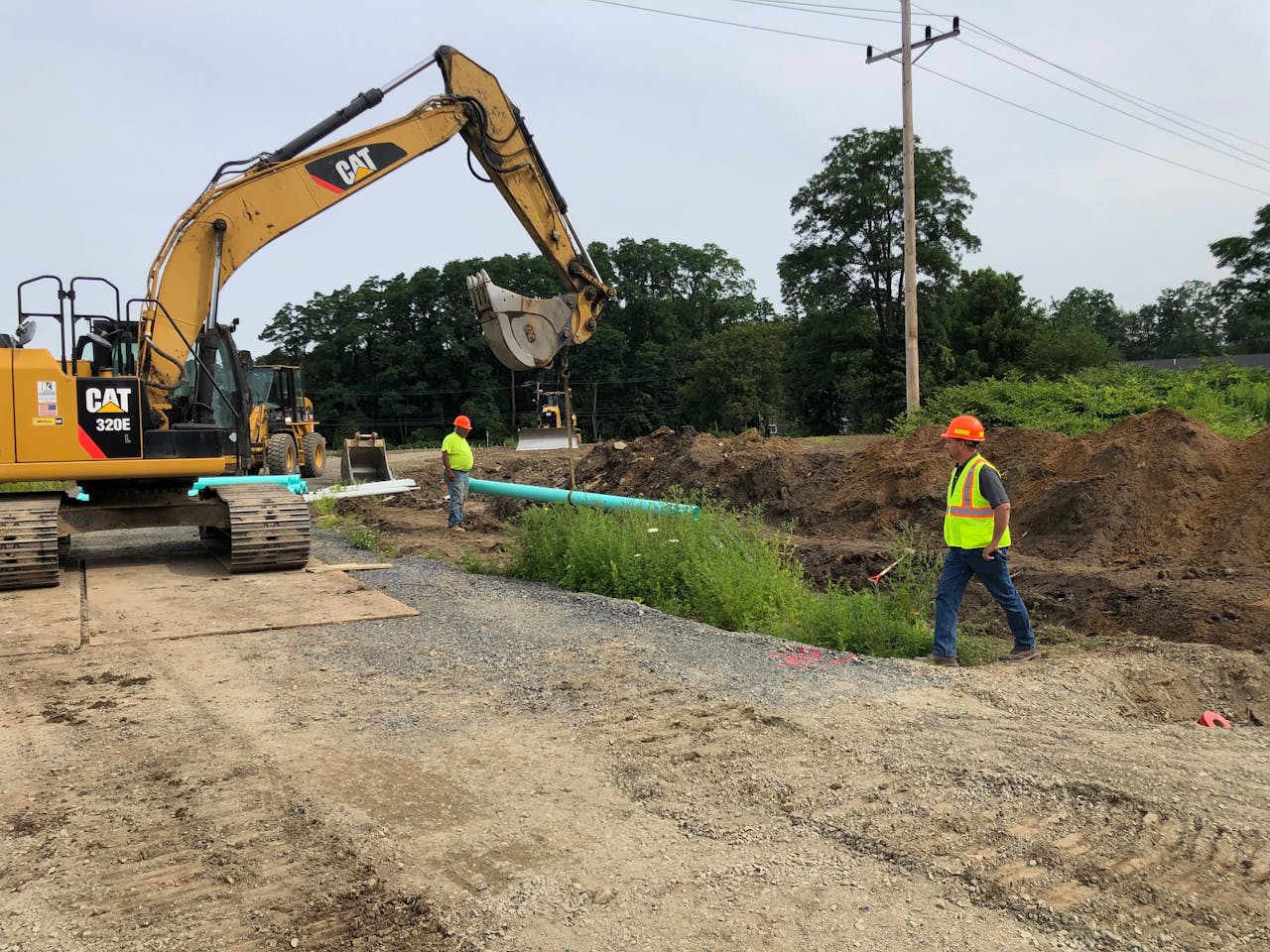 Kronau Construction & Equipment installs pipe for a warehouse and gas station project.Equipment WorldChip believes in adapting to the changes in the industry, especially when it comes to reinvesting in technology and equipment.

His first purchase of new equipment came in 2004 with a Cat D5G dozer. He had landed a job building indoor and outdoor horse arenas, and they had strict grading requirements. So he got the dozer equipped with a laser-guided system, which he still uses today.

“That was my first new-equipment purchase,” he says. “There were a lot of sleepless nights and hemming and hawing, and ‘Geez, that’s a lot of money.’ But it was a good move for us.”

He estimates the technology shaves about 30% off the time for a typical grading job on a Stewart’s site.

“You can just have a guy go out on the dozer and do the cuts and fills, and he doesn’t even have to get off the machine,” he says. “You’re not out there pulling stringlines and measuring under the string or shooting with a line level.”

It also helps on the crowded sites because you don’t have to wait for the other crews to move their trucks and stuff out of the way so you can do your layout work.

The GPS on the new excavator came in handy on a recent 100,000-square-foot self-storage project.

“We were able to dig the footings for that whole building without putting a single grade stake in,” he says. “We had a laser set up just to check the grade, and put the excavator on auto-dig.”

In the past, a worker in the trench would use a rover and laser to continuously check the grade and layout.

“It’s just a lot smoother, and it goes a lot quicker,” Chip says of machine control.

“If you don’t get onto GPS,” he adds, “you’re going to be pretty much left in the dust, and you’re not going to be competitive with the rest of the companies that are using it.”

Another area of technology that has helped the company remain competitive, while also reducing paperwork, is recently purchased software that electronically keeps up with employees’ time and equipment usage on jobsites. The superintendents input daily reports, including materials they used, photos, visitor logs, any test results.

“So we have real-time job-costing, and we know where we are on the job at any given time,” he says. “It’s streamlined a lot of our accounting and made things a lot more efficient and easier. Where we used to have to manually do data entry from paper timesheets or paper job reports and enter it into an accounting system, now it’s just automatically downloaded into the accounting system.” 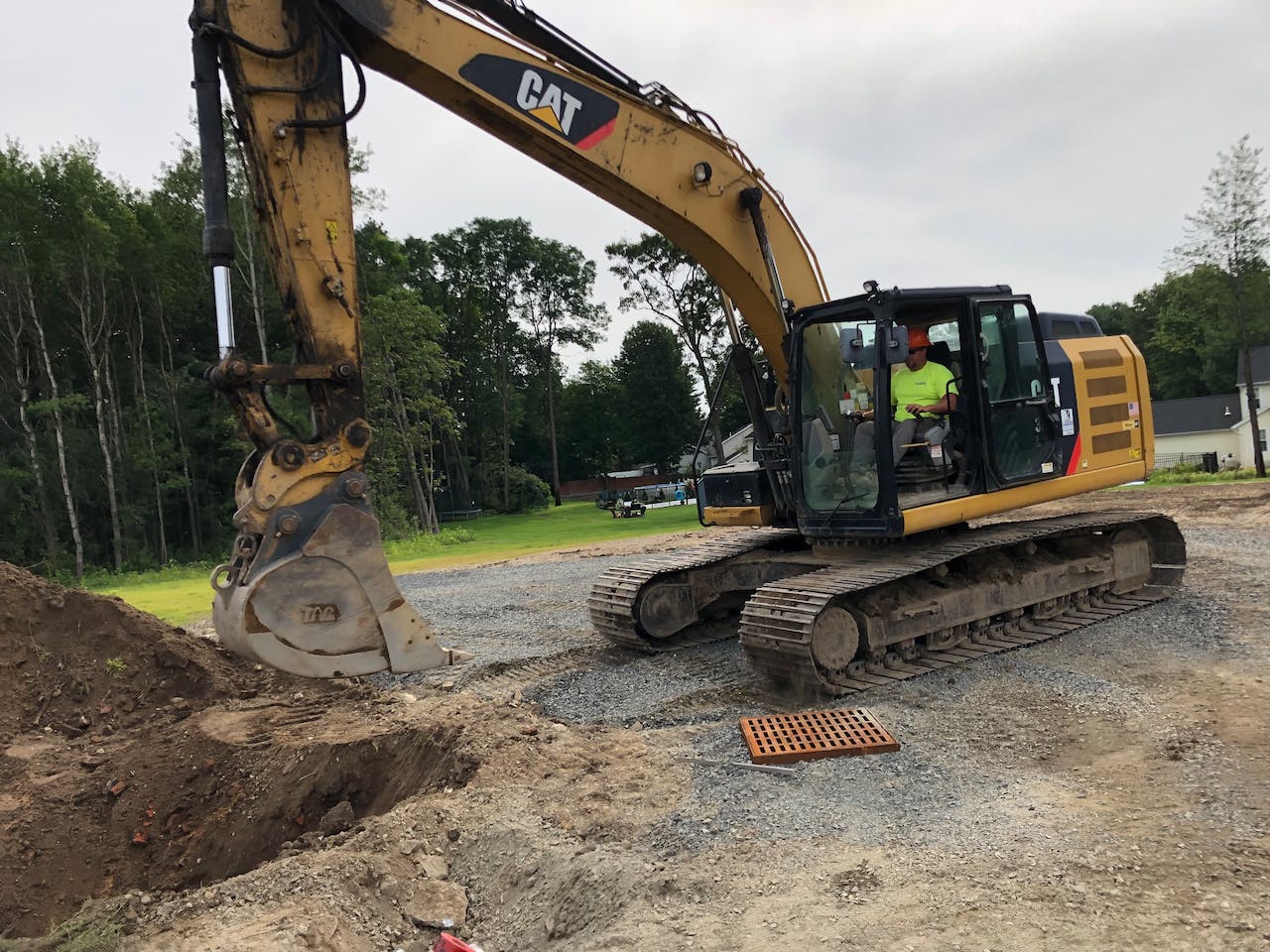 Excavator operator Matt Senter has worked at Kronau Construction & Equipment for 17 years.Equipment WorldAlong with reinvesting in the business, Chip believes in building a family atmosphere at the company. “I view every employee that I have as one of my family members,” he says.

Kronau doesn’t have much turnover, with many employees serving more than 15 years.

“This company treats their employees fairly and they are respectful,” says Brian Carter, sales manager at Milton Cat dealership. “Chip Kronau keeps his staff, and that lends to the integrity and quality of his business.”

Maintaining that quality as the company grows is a top priority for Kronau Construction.

“I’m not looking to grow just to get the volume numbers up, to just be a bigger contractor,” Chip says. “As long as we’re being profitable, we’re doing quality work, and we have an excellent reputation, that’s more important to me than than just the size of the company.”

He always strives to maintain long-term relationships with clients. He doesn’t advertise for work and doesn’t lack for projects. Other than a two-week shutdown in 2020 at the beginning of the pandemic, Kronau Construction has been busy, and 2020 was actually one of its highest-grossing years.

“We want to do repeat business for the same people,” Chip says. “We want to be the go-to company that when somebody’s got a job, they say, ‘I’m going to call Chip, because I know he’s going to do a good job.’”