Equipment manufacturers have been busy improving what works well on compact wheel loaders while also attending to some of the more problematic features. 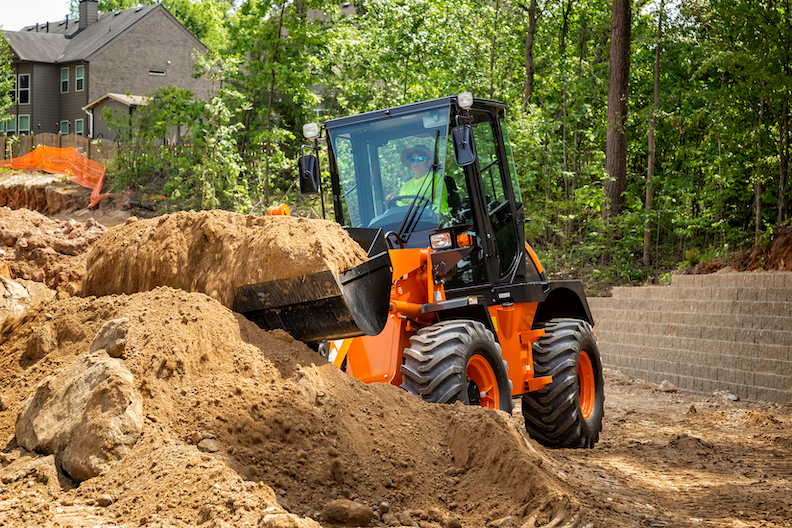 Customers can still choose between Z-bar and parallel-lift, also known as toolcarrier, linkages. Both had strengths, but also some weaknesses. The weaknesses have been addressed in the newer designs. Current versions of parallel linkages have increased performance specs, and Z-bar linkages now enable better visibility. 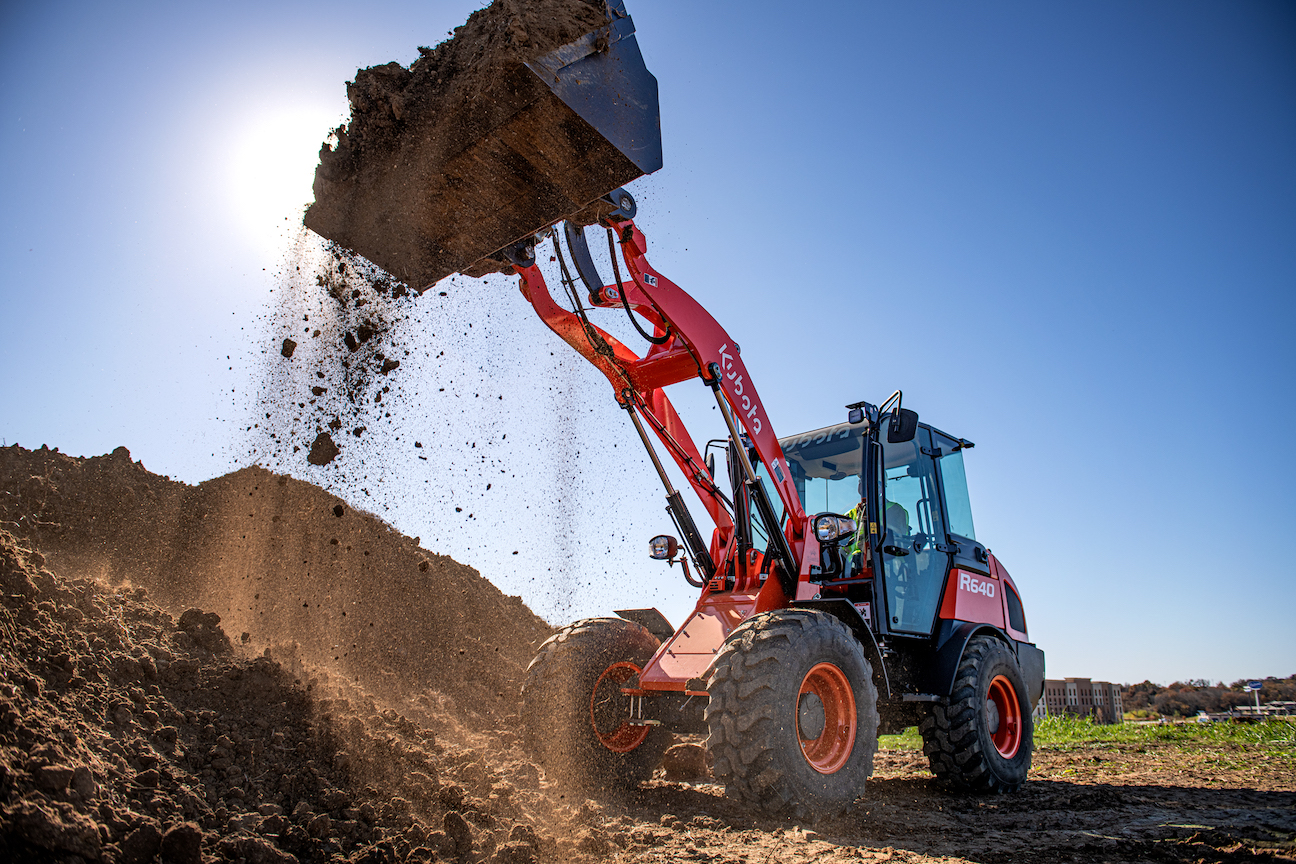 The 64-horsepower Kubota R640 has a standard bucket capacity of 0.94 cubic yards and breakout force of 9,869 pounds. Auxiliary flow is 17.8 gpm at 2,973 psi. Travel speed is up to 12.4 mph, and both axles have differential locks. Articulation is 40 degrees both directions.KubotaThe Kubota R540 and R640 have Z-bar linkages for greater breakout and lift but also have delta-shaped loader arms for an improved view of the coupler and attachment. A full-size right-side window gives excellent visibility to the right front tire. Switches have been moved from the steering column to the right side of the cab to the relocated console.

“Everything is neatly located on the right side at the operator’s fingertips while also creating a more spacious cab,” says Patrick Baker, Kubota Construction Equipment product manager. 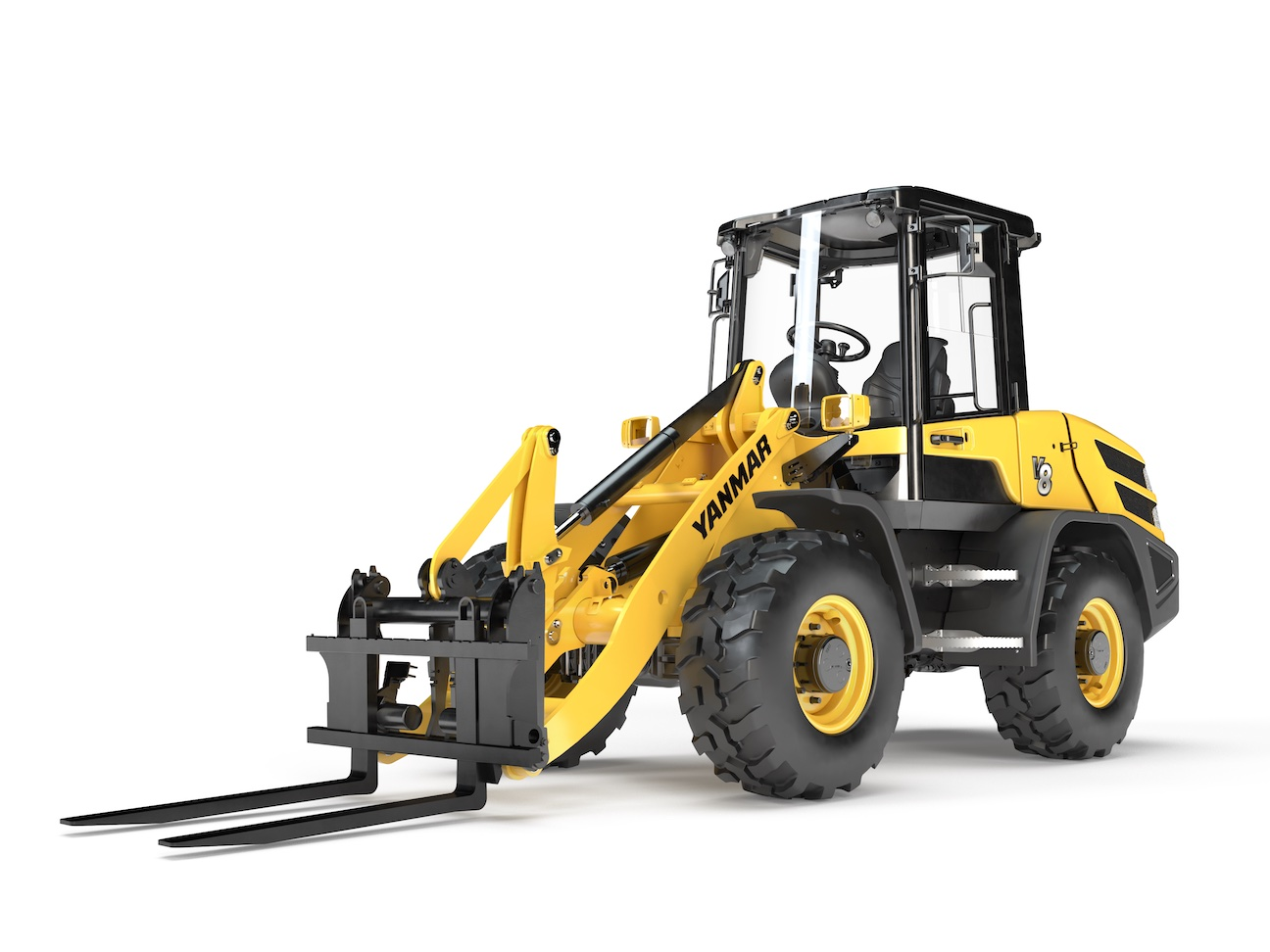 The 61-horsepower Yanmar V8 has bucket capacities of 1.05 to 1.57 cubic yards and a straight tipping load of 8,311 pounds. The Deutz TCD 2.9 L4 engine is rated at 60 net horsepower. Hydraulic flow is up to 17 gpm at 3,625 psi. The parallel lift linkage delivers 10,318 pounds of breakout force at the bucket edge.YanmarLee Padgett, product manager, Takeuchi, says auxiliary hydraulics and advanced machine controls allow the use of tree spades, power rakes, mulchers, mowers, trenchers and breakers.

“Customers can outfit compact wheel loaders with many of the same attachments formerly reserved for skid steers and compact track loaders,” says Padgett. “Compact wheel loaders still appeal to most people for the same reason they always have, the ability to carry heavier loads at higher speeds. It’s just that now they can accomplish more tasks and are often versatile enough to do the work of multiple machines while still excelling at their core functionality.” 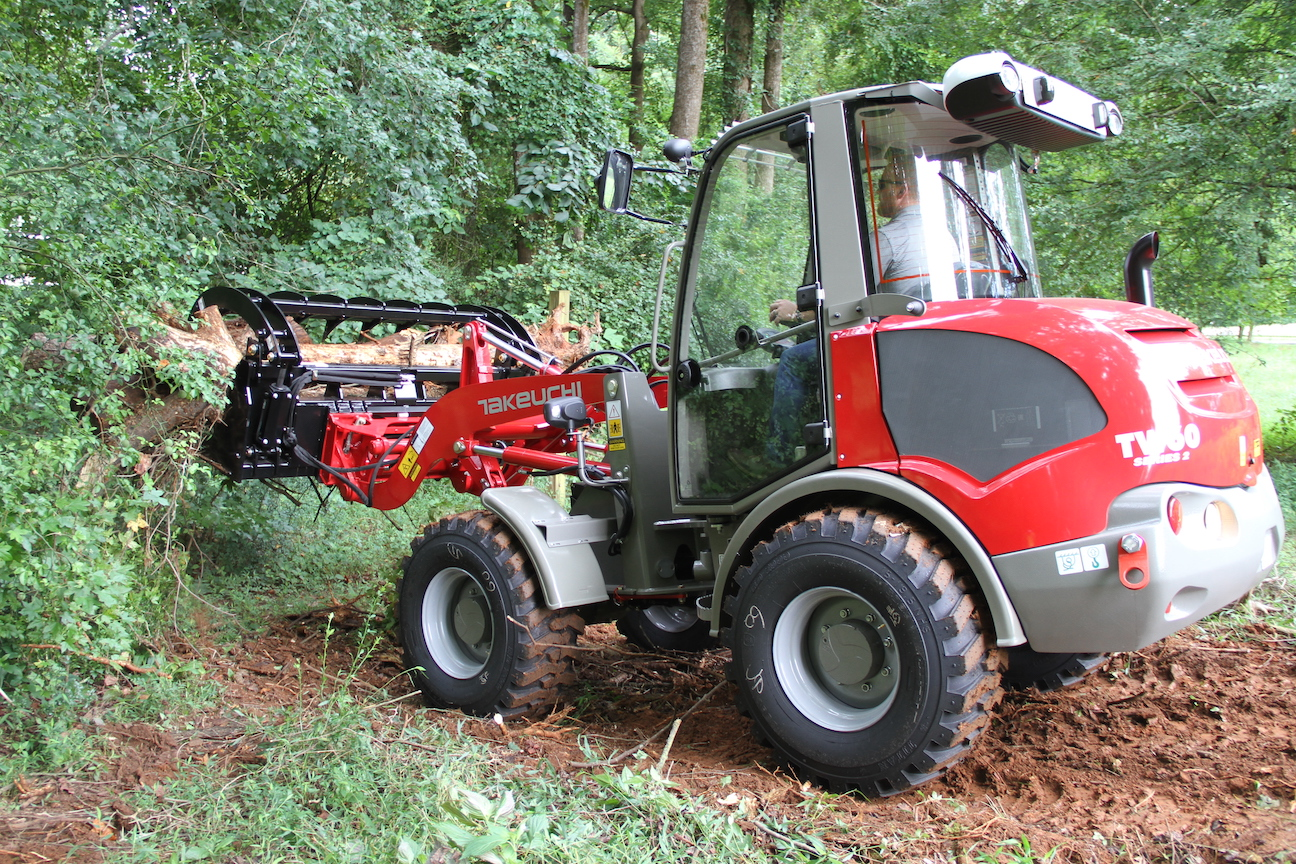 “Our models that fit through a 36-inch gate provide double the tipping load of a compact track loader or skid steer of that width,” says Gordon. “They also have better visibility and lower ground disruption.” 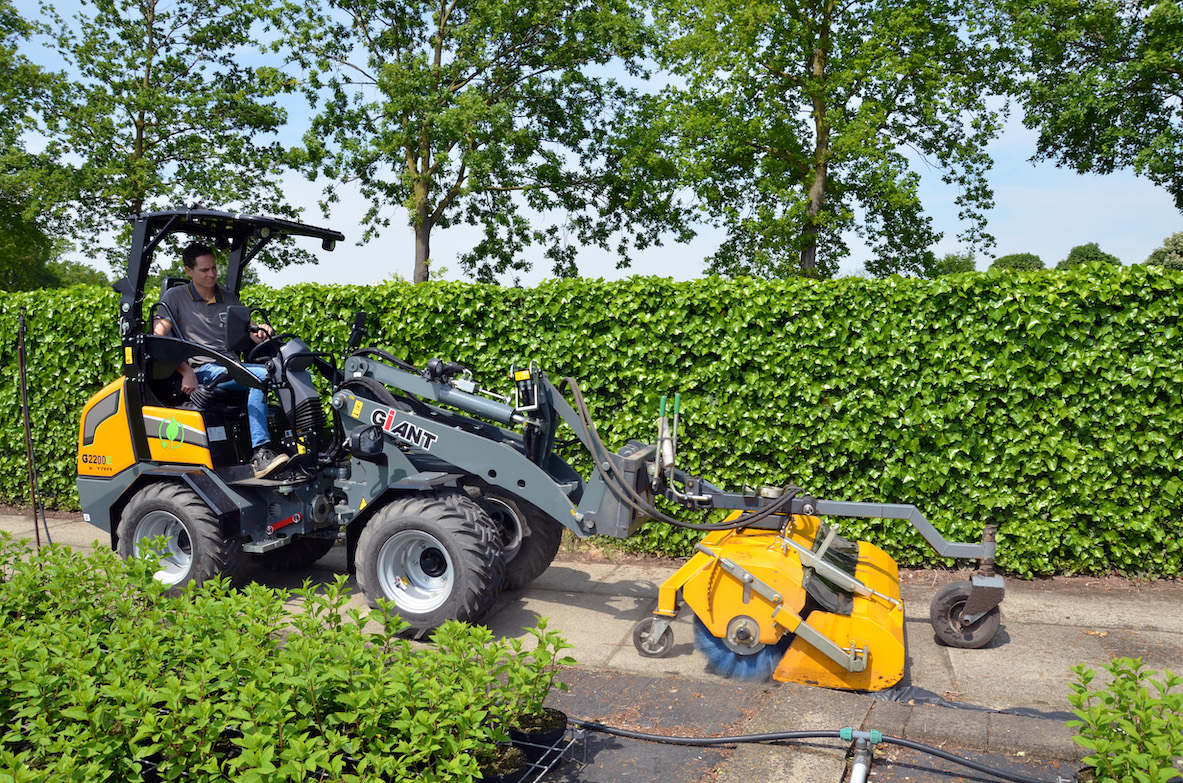 With the Giant G2200E, three battery options of 260-, 390- and 520-amp-hours give run times of 4, 6 and 8 hours, respectively, in normal working conditions. On-board charging options of 40 or 60 amps connect to a standard 230-volt power supply. External chargers of 40 to 300 amps can boost battery levels by 50% in under 30 minutes.Tobroco-GiantGiant’s compact wheel loaders have various linkages, each intended to optimize performance for a particular model. “No one linkage works best for all applications, so we match the linkage to each model’s intended use,” says Bostwick. He also says weak hydraulic performance is a thing of the past for many models. “You can have 30 gpm on a 75-horsepower wheel loader now.”

Bostwick says maintenance costs are usually much lower for compact wheel loaders than for compact track loaders and skid steers, “which are fighting against themselves on every turn.” 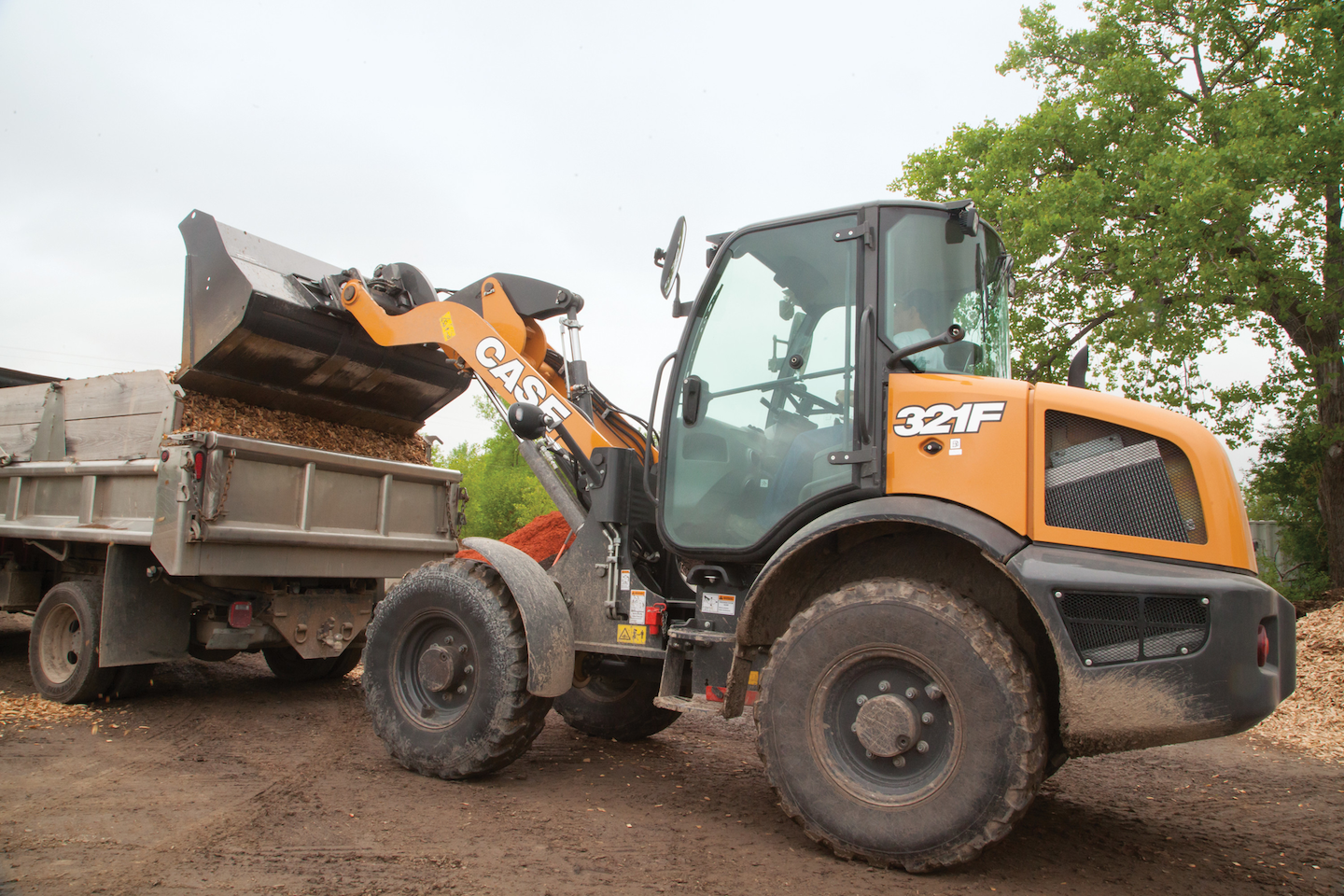 As with all Case F Series loaders, the 321F has adjustable electrohydraulic controls. Operators can adjust the responsiveness of lift and bucket tilt functions. The 321F has an FPT 3.4-liter 4-cylinder engine rated at 74 horsepower. Operating weight is 13,303 pounds with cab. Standard flow is 22.5 gpm; a high-flow option provides 34.3 gpm. Main relief pressure is 3,336 psi.Case CERyan Anderson, product marketing manager, New Holland, says there are still clear lines dividing equipment types and applications. “Skid-steer and compact track loaders are still best for high-demand hydraulic attachments,” he says. “Lift-and-carry operations are best left to compact wheel loaders. If the yard is big enough to accommodate one, a compact wheel loader is a better choice for loader applications.”

New Holland has three models. The W50C ZB has 58 horsepower with Z-bar linkage; the W50C TC is the same model with parallel linkage lift arms. The W80C HS is a 74-horsepower Z-bar machine with a high-speed option that reaches 21 mph. 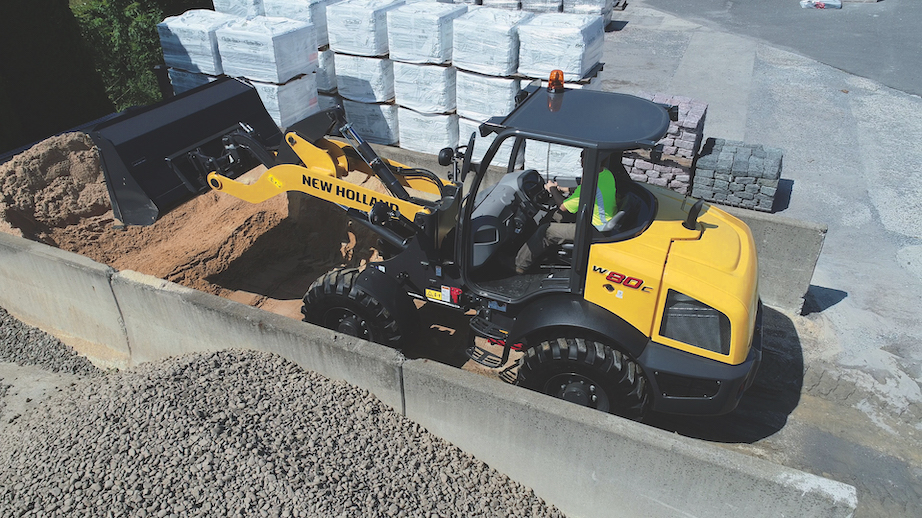 The 74-gross-horsepower New Holland W80C has an operating weight of 13,184 pounds and a heaped bucket capacity of 1.4 cubic yards. The high-speed option provides travel speeds up to 21 mph. Loader circuit flow is 22 gpm at 3,335 psi. Dump height is 105 inches, and reach is 33 inches.New HollandScott Britton, Cat product application specialist, says skid steers and CTLs will often have the option to upgrade both hydraulic flow and pressure; whereas, with the compact wheel loader, the option is for greater flow only, if it exists. “And skid steers and compact track loaders offer better attachment control just by virtue of their design.”

Some features are beneficial regardless of application. John Deere’s 304L and 204L are at or just under 8 feet in overall height to improve access in tight spaces. They have fewer features than the other two models in the Deere lineup, the 244L and 324L, but still accept a wide range of the more than 100 attachments the company offers. The 244L and 324L have a 23 mph top speed and optional high-flow hydraulics up to 29 gpm (244L) and 35 gpm (324L). A high-lift option on the 324L adds 17 inches to the height to hinge pin. 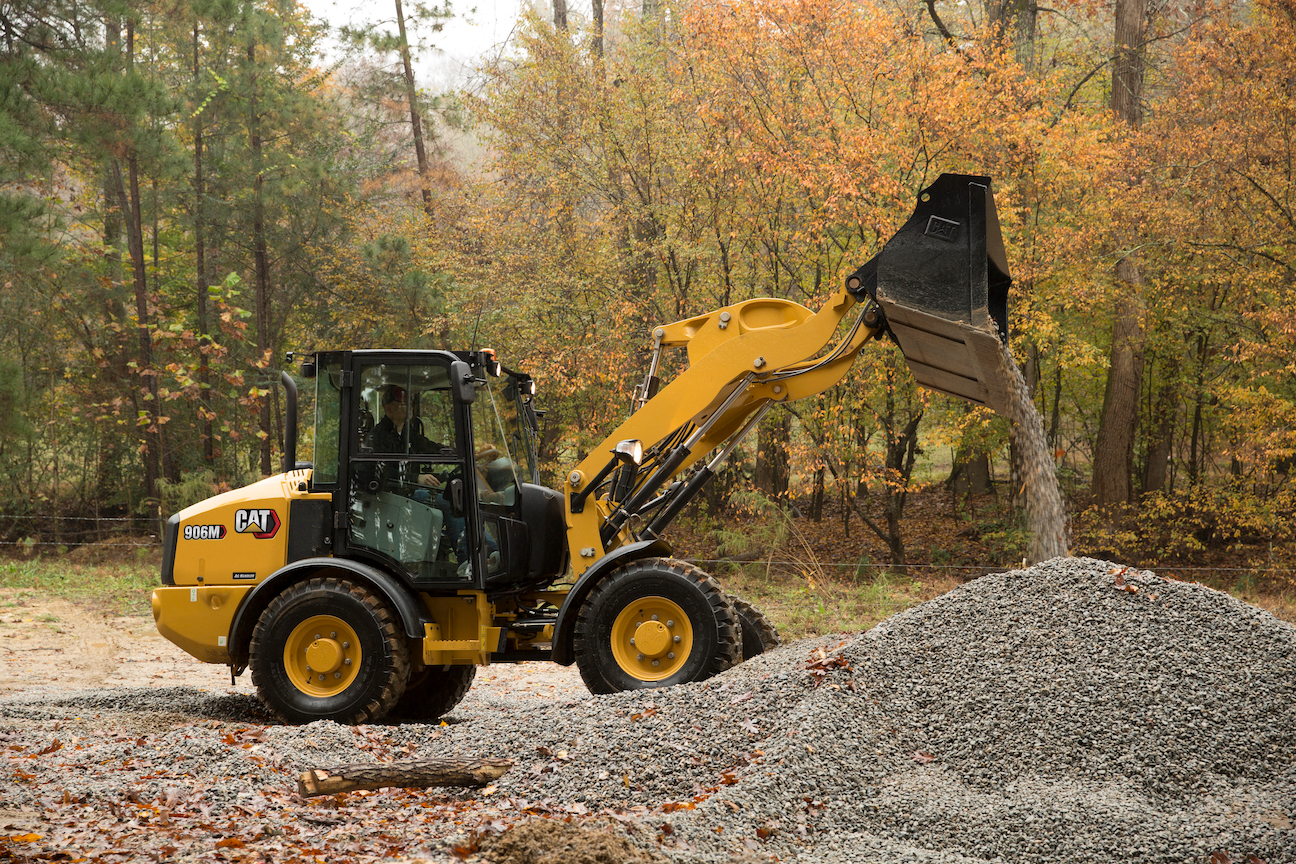 Powered by a Cat C303B DIT engine rated at 74 net horsepower, the Cat 906M has a 12,346-pound operating weight and 8,666-pound straight tipping load. Steering articulation is 39 degrees left and right. Bucket capacity is 1.2 cubic yards. Available options include 100% differential lock on both axles, selectable on the move and ride control.CaterpillarDeere’s Articulation Plus feature is available on the 244L and 324L. “Articulation Plus automatically adds 10 degrees of rear-wheel steer to the 30 degrees of articulation as the steering approaches full lock while retaining full tipping load capacity,” says Luke Gribble, Deere  solutions marketing manager.

Ethan Clowes, JCB product manager, backhoes, wheel loaders and side dumpers, points to features on the smallest model in its lineup, the 407. Like all JCB wheel loaders, the 407 meets Tier 4 Final with a diesel oxidation catalyst and no diesel particulate filter. Telematics are included. A common configuration includes a standard front axle and limited-slip rear differential. The 407 is rated for 7,700 pounds of towing capacity. A high-speed option increases travel speed to over 18 mph.

“Choosing the right machine, spec’d the right way, comes down to ROI,” says Clowes. “Understand your operation. Understand the abilities of each machine. Then match the machine to the job.” 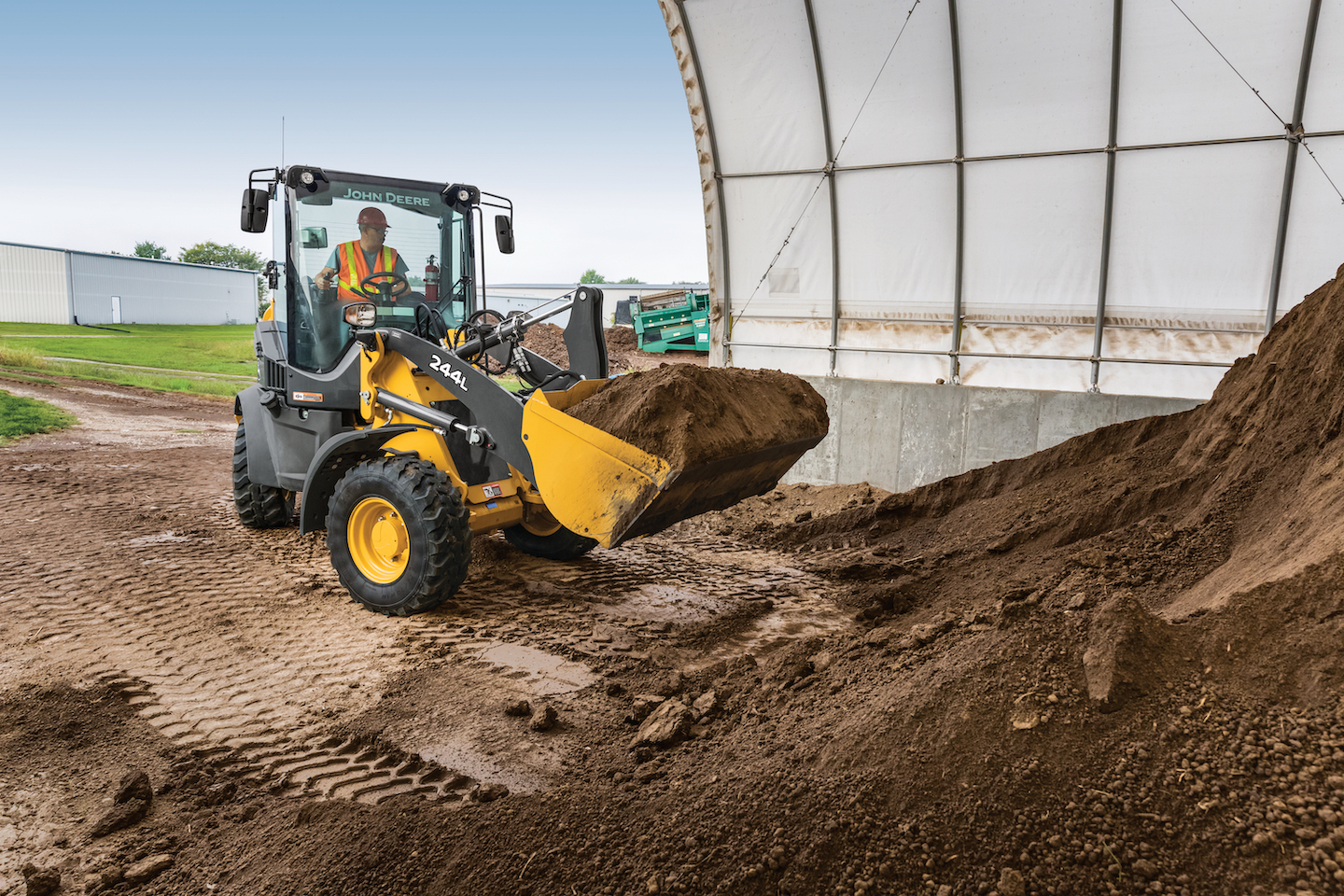 The Deere 244L is powered by a Yanmar engine rated at 71 net horsepower and features Deere’s unique Articulation Plus Steering System, which combines 30 degrees of articulation with 10 degrees of rear-wheel steering. Standard speed is 23 mph. Differentials are locking front and open rear. Operating weight is 12,258 pounds.John Deere

Harry Fleegel is operations manager for TNE Distributing in Minnesota. The company started bringing Cast loaders over from Italy in late 2016.

“Body panels are steel, not plastic,” he says. “Compared to many other brands, they have bigger engines and better service access. Pin height is higher and tires are bigger with 13- and 14-inch sizes.”

He says Cast has been eager to work with TNE to develop machines for the U.S. market with such features as a universal mini-skid attachment plate, common hydraulic attachments and multi-function joysticks. TNE offers nine models of Cast compact wheel loaders. All have joysticks, but other features and engine power increase as you move up the line. 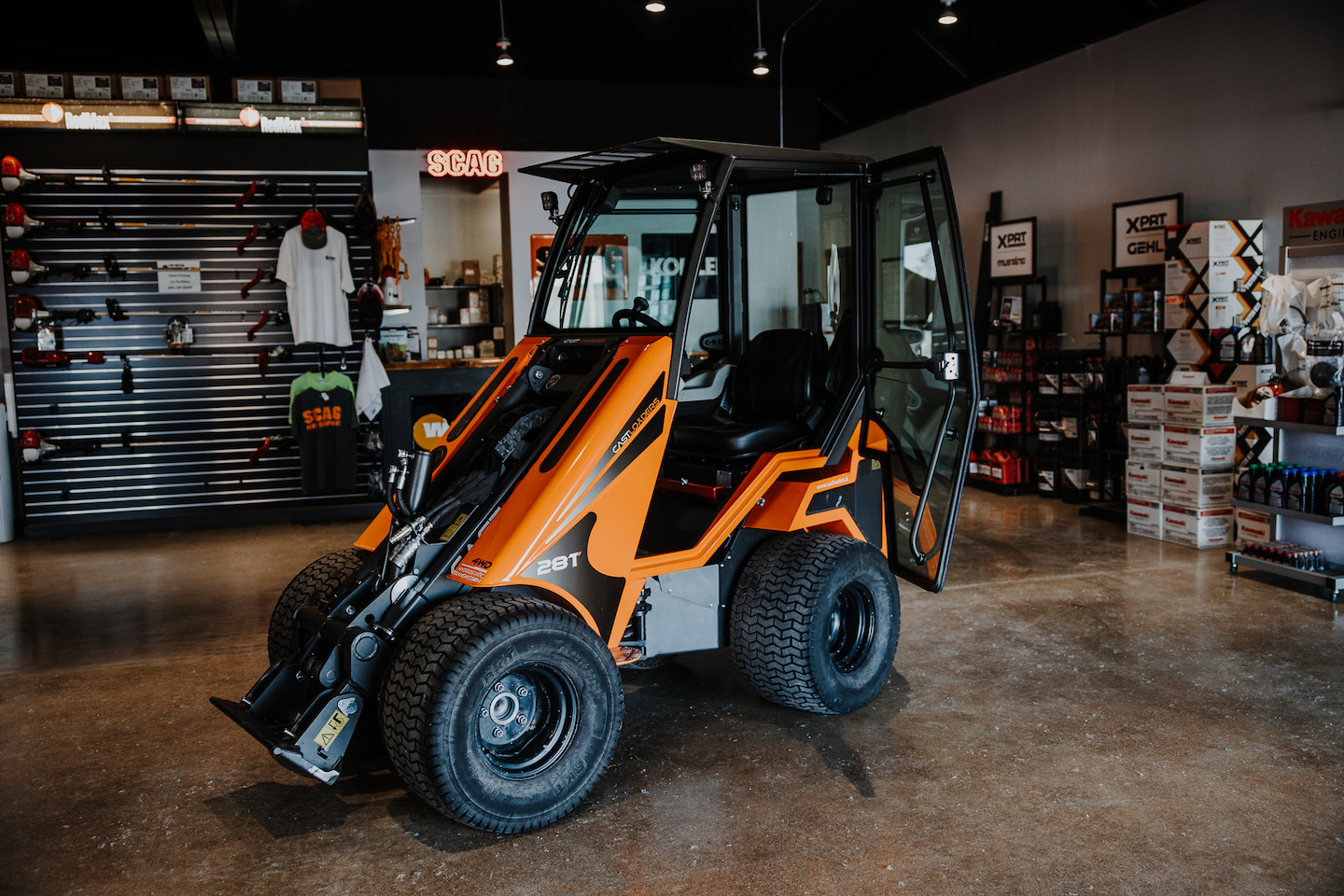 The four-wheel-drive Cast 28T is powered by a Kubota D1105 engine rated at 25 horsepower. An electric differential lock and four-function joystick are standard, as is a telescopic boom and universal coupling plate. Operating weight is 2,760 pounds.Netherlands-based Tobroco-Giant was founded in 1996 by Toine Brock, who is still the company’s owner and director. The company’s Giant imports to the U.S. market began in 2016.

Chris Sleurink is the CEO of miniloaders.com, the North America distributor of the Knikmops Km100 Tele from Belgium. The imported machine gets rebranded here as Intrepid. Sleurink and his father began importing them in 2018.

The Km100 Tele has an operating weight of 2,800 pounds and a single-speed drive capable of 11 mph. Hydraulics are 7.4 gpm at 2,600 psi. Sleurink says the Km100 Tele is well-suited to the North American market, but they will consider bringing in additional models from Knikmops’ 19-model line to meet market demands. 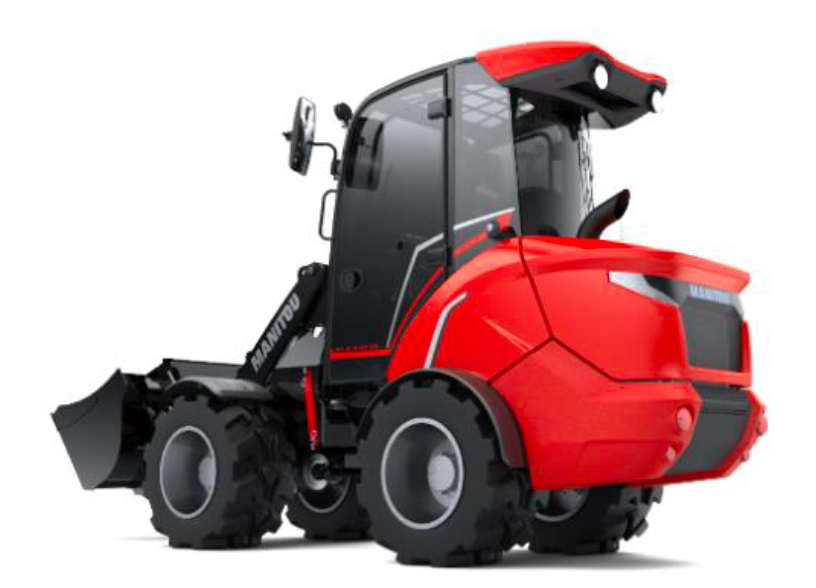 This is a sneak peak photo of Manitou’s forthcoming MLA compact articulated wheel loaders. The company plans to roll out four models: MLA2, MLA 3, MLA 4 and MLA 5. They will be redesigned with a narrower width and able to perform material handling as well as earthmoving work.Manitou GroupFrench-based Manitou Group, which also owns Gehl and Mustang by Manitou brands, recently announced it was bringing a revamped and expanded line of articulated compact wheel loaders to North America. At a recent unveiling of its new products, the company offered a sneak peak of the MLA2, MLA 3, MLA 4 and MLA 5 compact loaders, which are being manufactured in Europe.

The machines get a new design, with a narrower width for working on tight jobsites. They will be equipped with a short arm for greater capacity or a long arm for increased lifting height. The company says they will be able to perform material-handling as well as earthmoving tasks. They will be available in canopy or integrated cabin configurations and are expected to arrive at U.S. dealerships by the end of this year.

Ashton says electric models offer comparable and even greater power and performance compared to diesel machines but with less noise and vibration and no local emissions. “This opens up opportunities where diesel-powered toolcarriers were never considered.”

Diesel continues to provide the lower upfront cost, but O&O costs “can be quickly offset thanks to significantly lower maintenance needs with electric models such as the Volvo L25,” he says. The Volvo L25 electric compact wheel loader has an operating weight of 11,023 pounds. Peak power for the driveline motor is 48 horsepower, and for the working hydraulics motor, 43 horsepower. Battery capacity is 39 kWh, good for up to 8 hours of operation. Charge times are around 12 hours with 230 volt and 2 hours with 400 volt.VolvoGiant offers the electric G2200E. It comes with a 260-ampere-hour, 48-volt lithium-ion battery; options include 390 Ah and 520 Ah batteries. There are two electric motors, a 6.5-kilowatt motor for the drivetrain and a 12 kW motor for the working hydraulics. Power is regenerated during braking and on trailing throttle, as when descending a hill.

Sleurink says Knikmops is developing an electric model, which may be brought to the U.S. as an Intrepid. 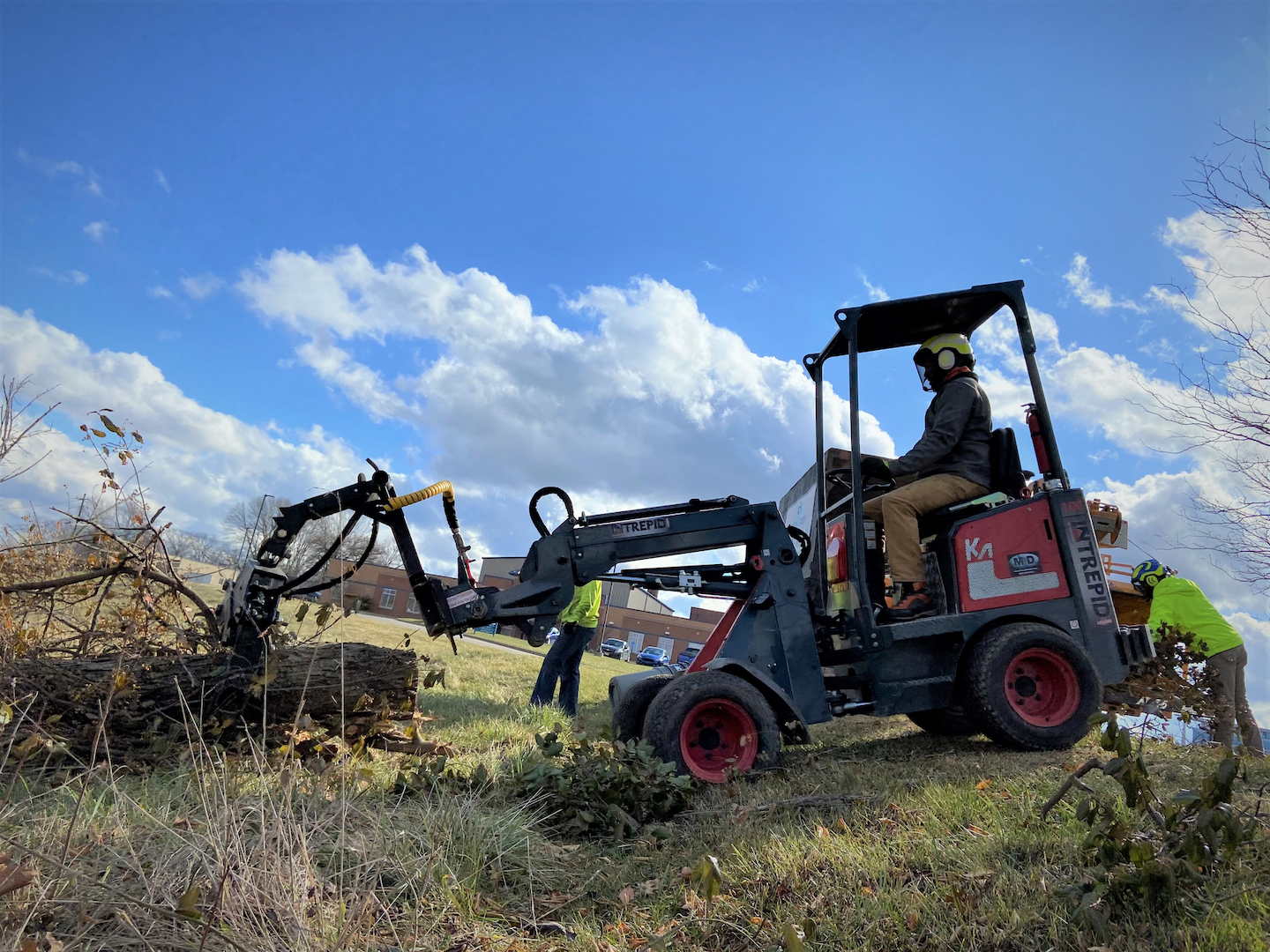 The Intrepid KM100 has a 25-horsepower Kubota engine and heavy-duty Poclain wheel motors. Top speed is 11 mph. Drive hydraulics are 22.2 gpm at 5,076 psi; work hydraulics are 7.4 gpm at 2,600 psi. Lift capacity is 1,485 pounds and tipping load is 1,705 pounds.Fleegel says Cast has an electric model in Italy, the 800 Eco, which he can bring to the U.S. for a customer who wants one, but he has no immediate plans for stocking the machine.

What about telescopic booms?

Many European compact wheel loader models also are available with telescopic booms to enhance their productivity as both loaders and toolcarriers.

All Cast models have telescopic booms. Giant offers three models in North America: the D254SW Tele, the G3500 Tele Series and the G5000 Tele Series. The Knikmops Intrepid, the KM100, is telescopic.

“They’re not designed to spend all day charging the pile,” he says. “There are better machines for that.”