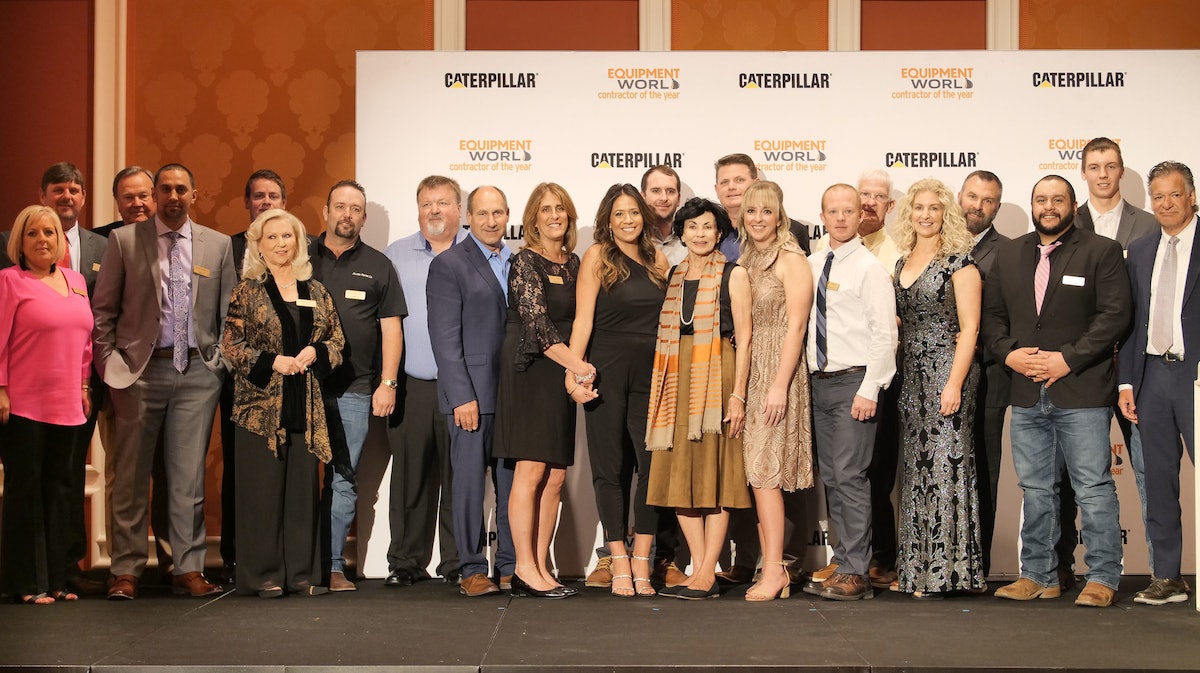 Equipment World has announced the 12 finalists of its 2023 Contractor of the Year awards.

The contest, now in its 23rd year, recognizes contractors who display the highest standards of business acumen, equipment management expertise, attention to safety and community involvement.

Each finalist will receive an expense-paid trip to Las Vegas in March, staying at the Wynn Las Vegas resort. During the event, finalists will participate in two roundtables, a VIP experience at ConExpo-Con/Agg and attend an awards banquet, where the 2023 Contractor of the Year will be announced.

In addition, each finalist will be featured in a profile on equipmentworld.com. The Equipment World Contractor of the Year program, which recognizes contractors who have annual revenues of between $3 million and $15 million, has been sponsored by Caterpillar since its inception in 2000.

In alphabetical order by company name, here are the 12 finalists, along with some of the comments Equipment World editors received from their references during the review process:

Jake McClure & Nick McClure, Alan’s Excavating, Augusta, Kansas: “Alan’s Excavating always has a knack for making the tough challenges look easy. It is very refreshing to work with people as honest and trustworthy as the employees of Alan’s. Typically, companies have a mix of personnel with some good and bad. But I can trust that everyone in their company will follow through on what they say they are going to do, no matter how big the challenge.”

Bill Stanley Jr. & Colleen Stanley, American Pavement Specialists, Danbury, Connecticut: “When they are done paving a road, parking lot, driveway or even a sidewalk, the red shiny trucks emblazoned with the American Pavement Specialists logo are remembered and revered, and if you are the owner of the project, you are comfortable with calling Bill by name and any of the other family members. You are left with a confidence that the job was done right, and that you can always call on them.”

Bonnie Rimel, Bonn-J Contracting Inc. of Florida, Chuluota, Florida: “You won’t find a business owner more dedicated to the overall good of our industry than Bonnie Rimel. As past president of the Florida Builders Transportation Association (FTBA) and many years of donating her time and energy to officer-level positions, that has been easily displayed. What others might not know is how truly generous Bonnie is with her money. Bonnie has been probably the most consistent supporter of the FTBA college scholarship and has gone deeper than just donating.”

Ken Clingerman, Clingerman Inc., Everett, Pennsylvania: “We were impressed by Ken’s responsiveness, knowledge and involvement. We have had a terrible time getting other contractors to answer the phone anymore, show up when they said they would and complete the job as quoted. Clingerman did all of this and more. They’re a very honest, high-quality contractor.”

Marsha Hudgins, Hudgins Contracting Corporation, Hampton, Virginia: “Hudgins always maintains a positive image with their equipment and brand by putting their best foot forward on every job. They’re team players who work cooperatively with other trades on the site. Their frontline supervisors are very technically proficient at what they do – communicating and coordinating work on schedule and within the budget.”

Keith Callaway, Keith Callaway Jr. & Lillian Callaway, K&L Paving Industries, Canby, Oregon: “This company represents the very best of the construction industry from every aspect. Culturally, they are primarily a second-chance employer that has successfully provided guidance to countless employees to help them stay close to their faith, out of trouble and sober. The family-type environment that the Callaway family has created at K&L is truly changing the world and deserves to be highlighted for doing so.”

Amanda Kurt & John Kurt, Kurk Inc., Union Grove, Wisconsin: “Kurk is more than just a concrete company, they’re a staple of the community. They did a pre-Veterans Day event to help support local veterans in the area. They’re involved with the schools. It’s the tertiary stuff. We like to see those we work with giving back, and I know other general contractors feel the same way because it’s a win for both of us.”

Gregg Lunsford, Lunsford Grading & Hauling, Talmo, Georgia: “Gregg is committed to his work. He makes sure it’s done right and well. That’s a big deal now. We come across too many contractors that tend to not be as engaged in the performance on the job site, and he very much so is, and he stays in communication with us about that. The relationship that he builds with owners and other contractors and the people that work for him makes him very engaging.”

Samantha Watt & Corey Watt, Mckinney Construction Co., Fontana, California: “Mckinney could give other contractors a lesson in honesty. They do what they say they are going to do. Because they’re so good to us, I prioritize working with them. Corey is absolutely perfect to deal with and always has been – and we’ve been doing work with them for 10 years.”

Peter Jones, Protek Construction Inc., Kingman, Arizona: “Protek knows how to get the job done. They’ll show up with a crew of 20, and they each have their own role. They all work together symbiotically, and they do a really good job. In Mojave County, there’s nobody that can touch them.”

John Jeffery & Rex Leipheimer, R.E. Miller & Sons, Dillon, Montana: “They are incredibly honest, their work is top quality, and if there’s any question that you may have on something, they follow up. They go above and beyond on everything. You always get more than what you expect. They’re just a fantastic company.”

Shay Stutsman, Stusman-Gerbaz Inc., Snowmass, Colorado: “Stutsman is an asset to the construction industry of the valley. They are forward thinking, implement new technologies that improve efficiencies, and more than anything, they are good people to work with. They show up with a plan and are good at collaborating with our staff on site. When Stutsman is on the job, the entire project seems to go better. Not only are they good to work with but they are passionate about what they do.”