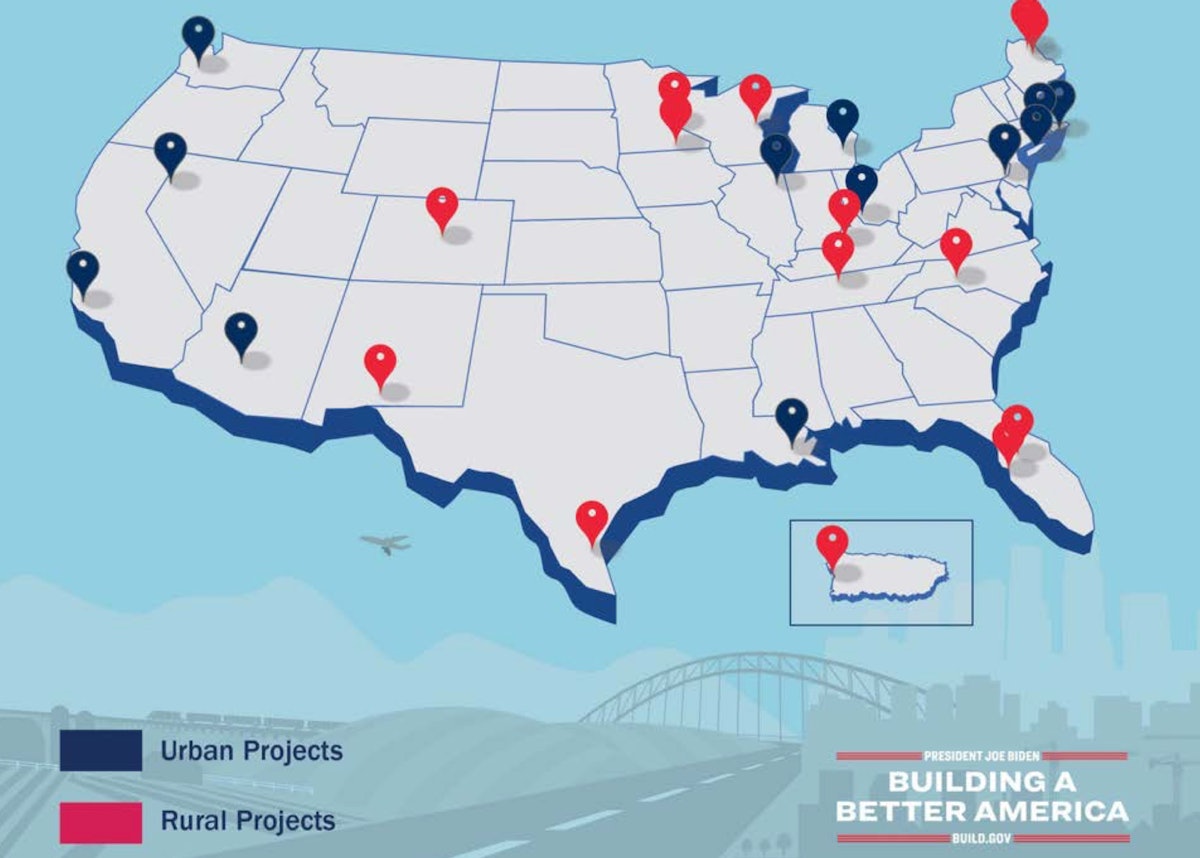 A new round of $1.5 billion worth of infrastructure grants has been approved for 26 projects around the country.

The money comes from the Infrastructure for Rebuilding America (INFRA) competitive grant program for highway, multimodal freight and rail projects. The program got a 50% boost in funding under the $1.2 trillion infrastructure law enacted in November. The program will get another $6.5 billion spread over the next four years.

The transportation projects are in 23 states. Here’s the list:

I-70 Floyd Hill to Veterans Memorial Tunnels Improvements – $100,000,000 Clear Creek County, Colorado. The project will improve approximately 8 miles of the I-70 Mountain Corridor, from west of Evergreen to eastern Idaho Springs.

Rockport Bridge Rehabilitation Freight Rail Project – $17,331,850; Ohio and Muhlenberg counties, Kentucky. This project will rehabilitate the Rockport Railroad Bridge by replacing the deck, filling in portions of the existing approach with rockfill and culvert pipes, and upgrading the electrical and mechanical components that allow the bridge to be raised to accommodate river traffic.

Presque Isle Corridor Project – $44,100,000; Presque Isle, Maine. The project will complete Phase II of a commercial two-lane bypass route of Presque Isle’s Main Street (US Route 1), constructing an approximately 6.3-mile-long, two-lane highway that will connect US Route 1 south of the city to the current bypass section already in service.

I-375 Community Reconnection Project – $104,657,051; Detroit, Michigan. The project would realign the ramps and freeway near I-375, convert I-375 to a slower speed boulevard, install calming traffic measures, remove weaving and merging areas along I-375 and I-75, remove the Jefferson Avenue curve, and incorporate LED lighting in the project area. The project will reconnect the neighborhoods that were divided by the current highway design

US 212 Freight Mobility & Safety Project – $10,000,000; Twin Cities, Minnesota. The project will expand approximately 5 miles of US 212 from a rural two-lane undivided highway to a four-lane divided expressway between CSAH 36 in Cologne to Tacoma Avenue, including construction of reduced conflict intersections and a grade-separated interchange.

US-395 & Virginia Street North Valleys – $88,917,130; Washoe County, Nevada. The project has two components. The first component will add two lanes along approximately three miles of US-395. The second component will create a complete street along a separate 2.5-mile stretch of North Virginia Street with added sidewalks.

I-85 FUTURES – $100,000,000; Cleveland and Gaston Counties, North Carolina. This project will widen a segment of I-85 from six lanes to eight lanes and will add auxiliary lanes for interchanges. The project will also add approximately nine miles of sidewalks, bike lanes and multi-use paths crossing over I-85, install fiber optic cable to support intelligent transportation system applications and rural broadband access, and install electric vehicle chargers.

Western Hills Viaduct Replacement – $127,115,954; Cincinnati, Ohio. This project will replace the structurally deficient Western Hills Viaduct over the Mill Creek Valley with a new structure south of the existing viaduct, which will connect to a redesigned interchange with I-75.