In our previous video, we detailed Caterpillar‘s new next-generation 315 excavator. But that’s not the only new 315 model. Cat’s also selling a 315 GC. What’s the difference between the 315 and the 315 GC? Who should consider buying the 315 GC? We break it down in this video.

Last week I covered Cat’s new 315 excavator. At 15 metric tons, it replaces the 315F L in Cat’s small excavator lineup and has a number of big improvements that mainly add up to one thing: a lot more speed.

But we had so much to cover in discussing the 315—a new hydraulic system, a new engine, a new cab, lower maintenance costs—that we didn’t have the space to cover the other new Cat 315, the 315 GC.

As big of an upgrade that the 315 is over the 315F L that it replaces, there’s a lot of jobs out there where the extra technology—and extra expense—that comes along with the 315 simply don’t make sense when the GC would do just fine.

The Basics (How These Models Are Alike) 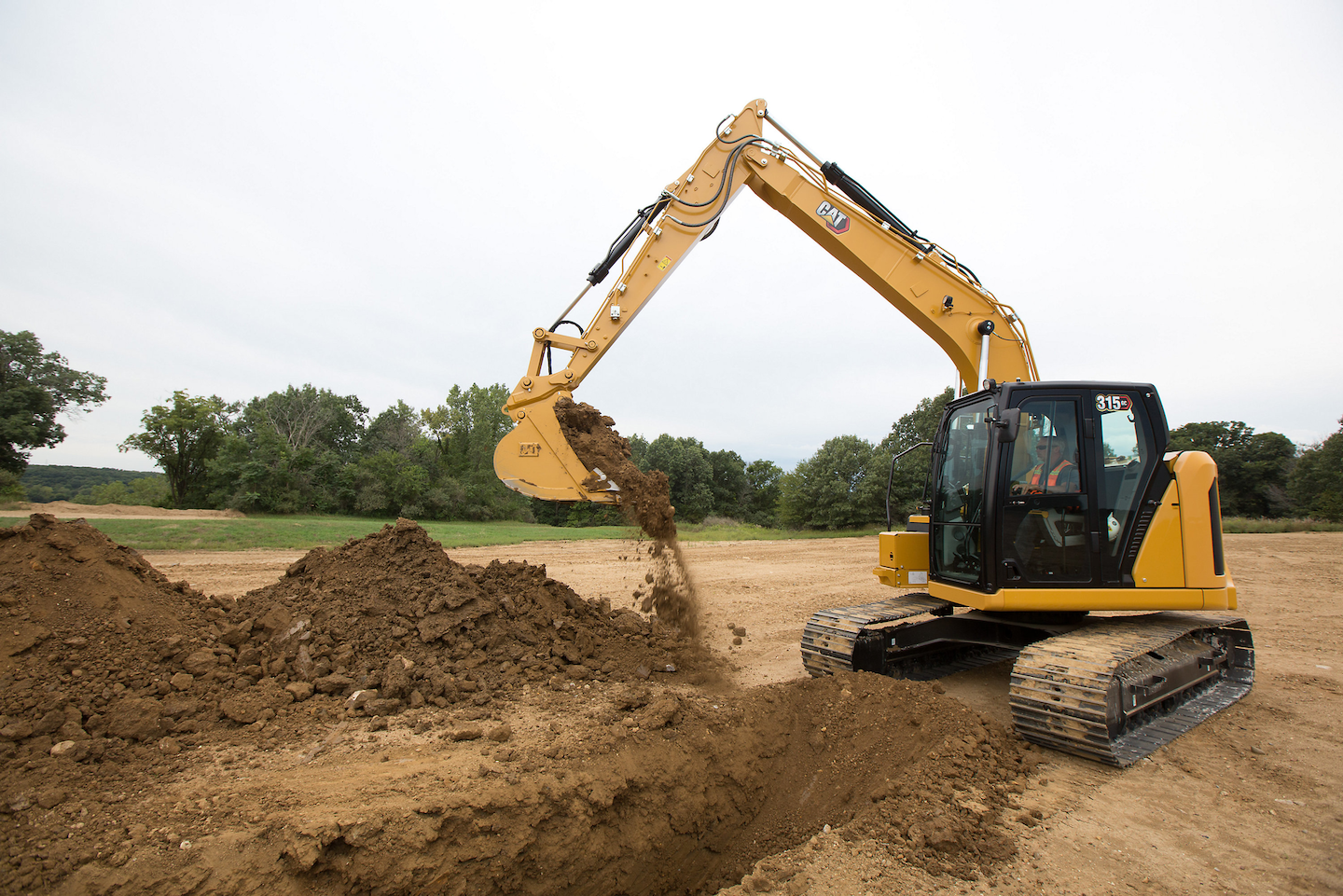 Before we get into the nitty gritty on the 315 GC and what this machine is and isn’t compared to the 315, let’s talk about what it is.

In that small excavator lineup, the 315 GC sits right in the middle, between the 13-metric-ton 313 and the 18-metric-ton 317. As such it’s a machine suitable for use in a wide variety of jobs across several different jobsites. Grade work, slope work, trenching, foundations, utility work—you name it, the 315 GC can tackle it.

The other key piece to the 315 GC is that it’s a compact radius machine with only 5 feet, 1 inch of tail swing radius. So you’ll be able to get this machine into some smaller spaces for digging and lifting. Because of its small size, it’s easy to transport too. And while its digging forces don’t measure up to what you get out of a midsize excavator, the 315 GC’s max cutting depth of 19 feet, 6 inches and its max loading height of 23 feet, 6 inches compare very favorably with those larger machines. In fact, while that cutting depth is a few feet short of what the midsize models are capable of, the lift height is more than what you get on the 330.

And when you take that loading reach into account alongside a tail swing radius that is half of the 330’s, you’ve got a machine suitable for much more than just utility work or on residential sites. These machines are right at home on even large infrastructure jobs and more of them than you might think are out there loading trucks.

Now, everything we’ve said up until this point about the 315 GC can be said of the standard 315. Same size, same weight, same cutting depth and loading height. And, like the standard 315, the 315 GC will also save you quite a bit on maintenance costs

Thanks to the elimination of certain filters and large interval extensions to others—such as the 50 percent increase to 3,000 hours on the hydraulic oil filter—both new 315 models can save you up to 25 percent on your maintenance costs over the 315F L.

Both models will also save you up to 15 percent in fuel costs as well thanks to the Eco mode and the new Smart mode, which automatically kind of moves machine operation and response between Eco and Power modes. The big deal with Smart mode is that unlike Eco mode, it can save you fuel without putting a cap on available power. Check out our coverage of the standard 315 for more details on these modes. 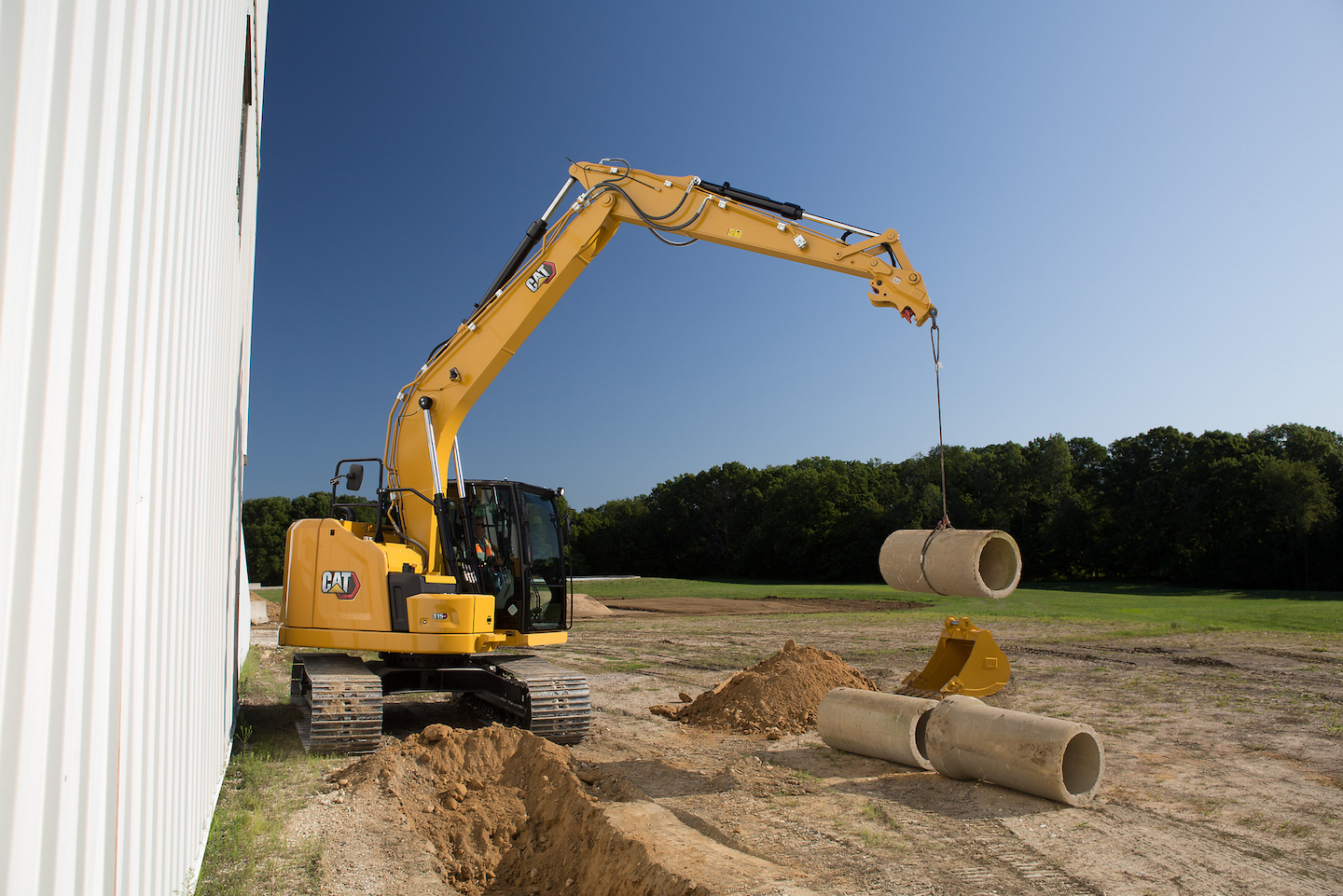 So, these two machines share a lot in common—even to the point that three of five primary differences in the two models are differences in shared hardware.

Since we were just discussing working ranges and dimensions, the first primary differences between the two machines—at least according to the specs Cat lists— is the extra reach you get with the 315 GC. There’s no mention of a different boom or stick on the GC, but according to the specs provided with this machine, the 315 GC has 28.5 feet of reach compared to the 315’s 19.5 feet.

The third difference is with the hydraulics. Both machines feature the same new hydraulic system and unlike the 315F L they replace, the 315 and the 315 GC have electronically controlled hydraulics. As we discuss in more detail in our coverage of the standard 315, these new hydraulics have made for both faster control response and higher hydraulic flow on the standard model.

However, while the 315 GC should offer the faster control response found on the standard 315 thanks to the elimination of pilot lines in favor of electronics, the GC model’s hydraulic power, and thus its overall speed in comparison to the standard 315, is lower. While Cat says the 315’s higher performance gives you about an 8 percent boost in productivity over the 315F L, with the 315 GC you can expect overall performance be the same as that F-Series model.

So, the benefit with the GC model is that you’re getting that still very capable F-Series level of performance, but now now at a lower price point while still getting the big maintenance savings, the big fuel savings and the electro-hydraulic controls on the more expensive standard 315.

With the GC you’re also going to be getting the same next-generation cab design that’s found on the standard 315. With this cab, vertical visibility has increased by 60 percent over the cab found on the 315F L thanks to larger front, rear and side windows and narrow pillars. Vibration has also been reduced thanks to viscous cab mounts.

Plus, like the 315, the 315 GC also comes standard with rearview and right-hand side view cameras. But, as there were with the engine and hydraulics, there are some differences in the cab of the GC model.

For starters you’ll get an 8-inch touchscreen instead of a 10-inch touchscreen. And while the standard 315 has a see-through poly hatch that gives you overhead visibility and a bit more light, the 315 GC has an opaque steel hatch. Finally, instead of a heated air-ride seat, the GC model has a mechanical suspension seat.

Who Should Consider the 315 GC? 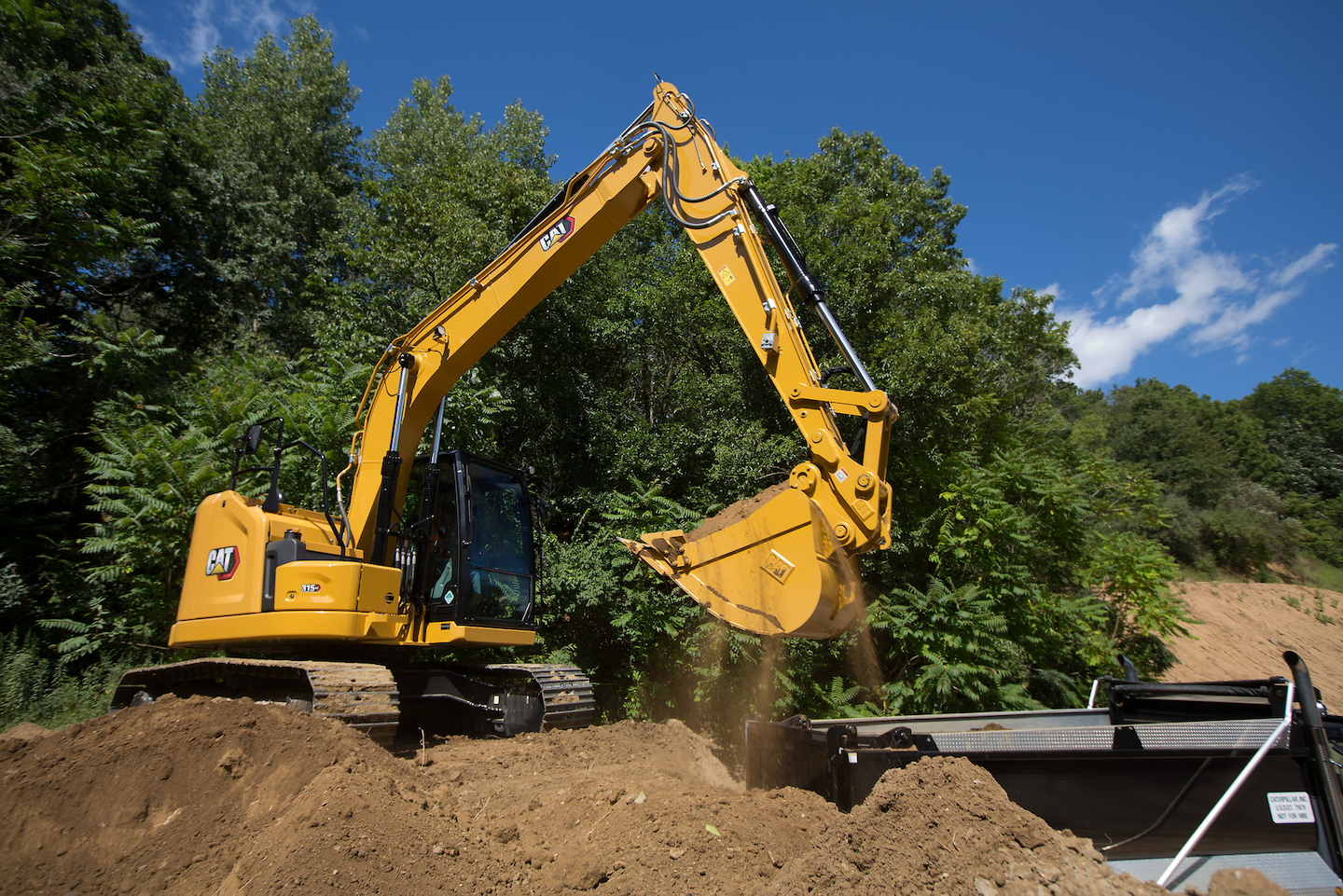 Now all of this brings us to what—beyond the difference in hydraulic power—is the other primary difference between the 315 and the 315 GC and that’s standard technology.

While the 315 comes packed with standard technology like real-time Cat Payload measuring, Cat Grade with 2D grade indicate, VisionLink telematics monitoring, the 2D E-fence safety system and the ability to remotely run diagnostics, troubleshoot and upgrade firmware, the 315 GC doesn’t have any of those features.

Cat excavators are beginning to differentiate themselves from the competition not just on the quality of their machine control and telematics technology, but also on the standard inclusion of this technology on these next-generation models. Cat knows its machine are in the premium tier and the company knows that there is plenty of strong competition. So, the company is in a way drawing a line in the sand with a strong package of technology as standard features on its standard models to justify the added expense of its machines.

However, Cat also knows that not everybody needs those technology features on every job and certainly not every machine. A lot of you need a 15-metric-ton machine but maybe you just need it as a support machine, or a machine only used on certain jobs—something used maybe 400 or 500 hours every year.

If that’s the case, and you’re not using this as a production machine, you likely don’t need 2D indicate or payload measuring. With the GC, Cat is basically trying to give you only what you really need, and that’s solid performance with the benefit of lower up-front acquisition costs and lower owning and operating costs.

And beyond giving customers the ability to have more control over whether the machine they’re buying is the machine they need, the GC models also offer a lower barrier to entry to first-time Cat customers, or those who consider the brand outside of their price range.

In multiple conversations with Cat’s North American manager for retail development, Alex Stokman, she has told me one of her biggest initiatives is trying to remove some of the mystique from Cat’s pricing while also working to dispel the notion that Cat is too pricey for smaller operations or even one-guy or one-gal and their truck and trailer businesses.

That’s why Cat has moved to on-machine price displays on many of their smaller machines at dealerships across North America and it’s why value and budget minded machines like the GC that seek to offer strong performance, durability and the type of cost reduction advances that come with new models over time—and pairing all of that with lower up-front cost—that’s going to be very important to the company’s lineup moving forward.