Work is set to begin next year on a three-year, $446 million widening of Interstate 17 north of Phoenix.

The project, which includes 15 miles of widening and 8 miles of new flex lanes, would alleviate congestion and improve safety, according to the Arizona Department of Transportation. ADOT recently awarded the contract to design, build, operate and maintain the expanded roadway to a joint venture of Kiewit Infrastructure West and Fann Contracting.

The DOT says the 23-mile section of I-17 between Anthem Way and Sunset Point carries 1 million travelers a year, with most traffic on weekends. Along with road widening and flex lanes, the project involves two bridge replacements, one bridge deck replacement and the widening of 10 bridges. 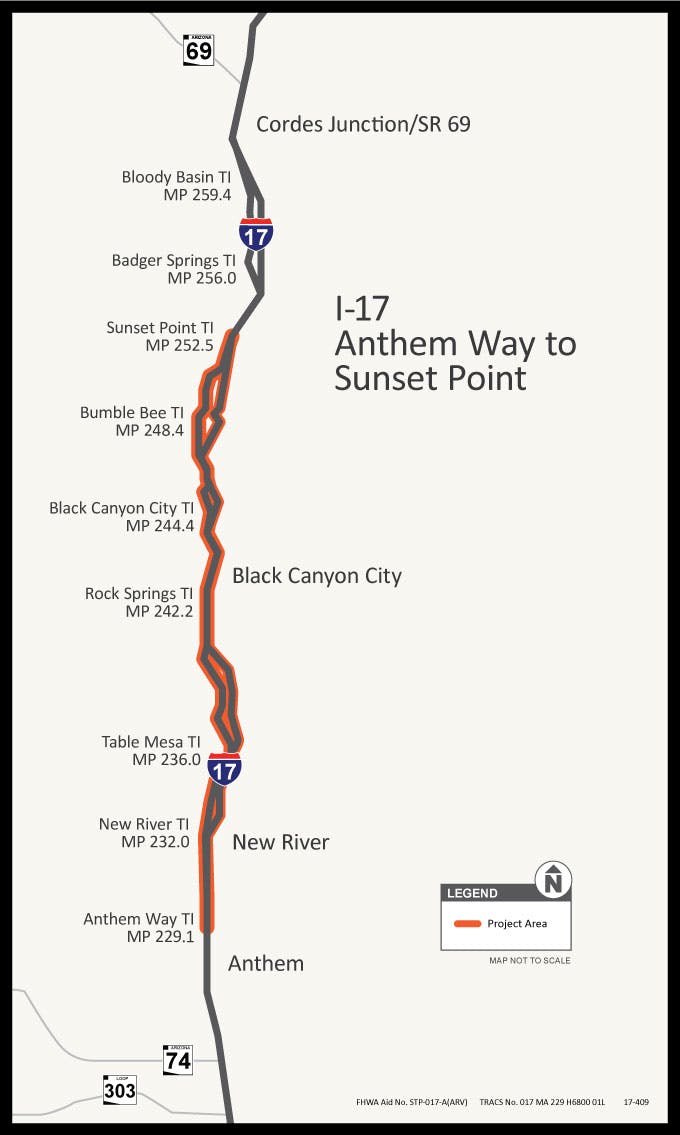 A map of the 23-mile project area to widen and add flex lanes to Interstate 17 between Phoenix and Flagstaff, Arizona.Arizona Department of TransportationThe 8 miles of flex lanes would be used during peak travel times and in emergencies. Drivers would pass through a gate to enter the lanes, which would be separated from the main highway lanes by a concrete barrier. The two lanes, on a mountainous, curvy section between Black Canyon City and Sunset Point, would carry travelers in one direction, with that direction switching to accommodate traffic needs.

I-17 currently has two lanes of travel in each direction and provides a highway connection between Phoenix and Flagstaff, from I-10 to I-40. The 15 miles of roadway between Anthem Way and Black Canyon City would be widened an additional lane in each direction to four lanes. Then from Black Canyon City to Sunset Point, the two separated flex lanes would be added to the southbound road.

Here’s a video rendering by ADOT of how the flex lanes would work: